In the United Kingdom, what the public want, and what the public are offered are two very separate entities. At Thursday's general election, the British electorate will be voting for political parties, but, according to many recent opinion polls, against the issues important to them. 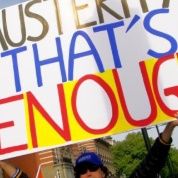 While hitting the ballot box ought to be an opportunity to elect a government representative of the public’s views, the reality is that mainstream parties fail to offer policies in line with the majority opinion, and the discrepancy is alarming.

Surveys produced in recent months and years by mainstream pollsters including YouGov, ICM and Lord Ashcroft have yielded intriguing results: intriguing, that is, if you are a career politician with no contact with the average Brit.

Over keys questions like taxation, defense, privatization and climate change, mainstream parties could learn a lot from reading the polls.

In 1992 Bill Clinton managed to nail the U.S. presidential election with the realization that everything hinged on “the economy, stupid.”

This U.K. election, with voters raw from years of austerity policies and attacks on the most vulnerable as the government struggled to heave its way out of recession, will be no exception.

Under the current government, the British public has suffered the greatest, and most prolonged, slide in living standards in years, and are baying for an improvement.

Austerity is the election buzzword, and a key area in which popular opinion diverges from the political status quo.

And as the Tories have pledged both in the most recent budget and in their 2015 manifesto to cut taxation on the mega rich, 69 percent want taxes on the highest earners raised, rising to 78 percent in the 60+ age bracket, a demographic which packs an electoral punch.

Despite a declaration from Prime Minister David Cameron earlier on the campaign trail that this election is about, “in one word,” security, most polls reveal that it features pretty low down the list of voters' priorities, under the National Health Service, jobs, wages and prices, and immigration.

The Conservatives have pledged a “full” replacement of Trident, the British nuclear program based in Scotland. Labour, though in theory in favor of multilateral disarmament, would retain Trident as a “sea deterrent.”

Only 33 percent of over-35-year-olds believe the UK's weapon system should be renewed to preserve its current size and capacity. Support drops even lower to 19 percent among 18-35s in an April 2014 Guardian poll of over 4,000 British adults.

‘Public opinion is shifting against nuclear weapons as the issue of replacing the Trident submarines rises up the election agenda,” said Campaign for Nuclear Disarmament general Secretary, Kate Hudson, exclusively to teleSUR. “The establishment parties are stuck in the Cold War and proposing business-as-usual - by backing a new nuclear weapon system in their election manifestos, ahead of next year’s Parliamentary vote.”

The impact of spending cuts and public opposition to recent military interventions means public support for nuclear weapons no longers so strong and the Scottish Nationalists and the Greens, previously minor parties, are now reaching new heights in opinion polls by setting out clear and principled opposition to nuclear weapons.

Britain’s public services have been systematically dismantled and sold off cheap since the bleak days of Margaret Thatcher’s privatization free-for-all beginning in the late 1970s.

But it has not just been Conservative governments to champion services give-aways. Tony Blair's New Labour began a policy called Private Finance Initiative, which packaged off parts of health and schools services. Cameron has reassured voters that the NHS will be further sliced up and sold to the highest bidder, should he come back into power.

But in an astonishing poll in 2013, the public showed that it was clamoring for nationalization. 68 percent believed that energy should be in the public sector, 84 percent thought the same of the NHS.

And last year, 60 percent said that wanted the railways re-nationalized.

Frances O’Grady, general secretary of the Trade Unions Congress, explained how it was cost that drove the public to diverge so far away from the political debate.

"The cost to passengers of the failed privatization of the UK's railways keeps growing year on year. We've ended up with slower trains and higher fares than countries who have kept their trains in public hands. The huge sums of taxpayers' money spent on tendering rail franchises is yet another hidden cost of privatization,” she told teleSUR.

A political “hot potato” that the main parties are unwilling to coherently handle is climate change.  The Green Party has taken the lead in strategies to combat global warming, like off-shore wind farm targets, and have been dismissed as hippies.

But, as Greenpeace UK climate and energy campaigner, Louise Hutchins, told teleSUR, “Action on climate change may not be as unfashionable amongst voters as the major parties think."

"This remarkable lack of attention to climate issues in the leaders' debates is testament to the agenda set by five years of 'green crap' bashing Conservative led government and relentless criticism of renewable energy by the Tory-leaning press,” said Hutchins.

“Yet building a modern, green economy is a real part of the appeal of the rapidly growing Green and Scottish Nationalist parties, particularly amongst young people.”