Given the recent arrest of the former head of Colombia’s intelligence services, Maria del Pilar Hurtado on human rights violations charges on the same day as Colombian President Juan Manuel Santos said his government will pay greater attention to the threats made against human rights activists, it continues to shock many that Colombia’s history of abuses and persecution do not receive greater attention. 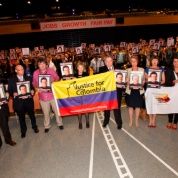 Indeed, when former Colombian president Andres Pastrana visited Venezuela recently to meet with opposition politicians, little attention was drawn to human rights violations committed during his administration, including those committed by paramilitary organizations which flourished during his term. Pastrana also cut funds for the Attorney General's Human Rights Unit.

According to figures from the U.S. Office on Colombia civilian killings by the military increased in areas that were the focus of Plan Colombia, where the U.S. increased its assistance. These numbers do not include the massacres committed by paramilitary groups, who military officials have been accused of collaborating with. In Alto Naya, Cauca for example up to 130 civilians were killed — many dismembered with chainsaws — and thousands displaced by approximately 100 paramilitaries. The Colombian military did not respond, even though an army base was barely one hour away.

Pastrana gave way to another Conservative in the form of Alvaro Uribe, who not only continued Plan Colombia, but also helped incentivize human rights abuses.

Hurtado is the latest Uribe-era official to be arrested and charged from human rights and civil liberties violations, joining the five governors and 32 legislators, including Uribe's cousin and former President of Congress Mario Uribe Escobar, who have been convicted.

This does not include the number of military officials who have been charged in the “false-positives” scandal, where military were found to have murdered thousands under false pretenses, claiming the dead as guerrillas in order to receive bonuses or raises.

Several Colombian lawmakers have been pushing for Uribe himself, now a Senator, to be investigated for paramilitary ties by the Colombian Congress.

To the extent that the number of dead are acknowledge by media and decision-makers outside of the country, they are largely treated as irrelevant. Both Canada and the U.S. have signed free trade deals with Colombia for example, despite the human rights concerns raised. Both countries also have Colombia within the group of countries that they will permit the sale of prohibited weapons to.

But if human rights are ignored, political prisoners are a well-kept but ultimately large secret.

According to Colombia’s National Penitentiary and Prison Institute, of the over 169,000 men and women in Colombian jails, 2,042 are charged with the crimes of rebellion. However, when one includes those imprisoned for other related charges such as conspiracy, terrorism, kidnapping, financing of terrorist groups, use of illegal means and methods of warfare or treason, the number is much higher.

In fact, the total number of political prisoners in Colombia is estimated to be at least 9,000 by human rights organizations, but some groups put the number as high as 22,000.

While there are admittedly members of the country’s guerrilla organizations among those in prison for “political crimes,” trade unionists, activists and politicians are also put behind bars by Colombian governments.

Francisco Toloza is one of the many examples. Toloza, the head of International Relations for the left-wing Patriotic March party, has been in jail since he was arrested on Jan. 4, 2013, accused of “rebellion.” He had been active in the student movement, later moving on to facilitate political training in trade unions. The Patriotic March has also been targeted by paramilitary groups, who accuse the party of having guerrilla ties.

There are some who have been released as a result of pressure from solidarity and human rights groups, such as Liliany Obando. Obando was imprisoned from 2008 to 2012 in the Buen Pastor Women’s Prison, Bogota, after being dragged away in front of her two children and her mother. The academic, a human rights campaigner and trade unionist was also accused of “rebellion,” but was held in jail without being convicted of any crime.

The union that Obando was working with, the FENSUAGRO Agricultural Union, has had 1,500 of its members killed since its formation in 1976. Some 150 of its leaders and activists are still jailed.

While Obando and a few fortunate others have been freed, thousands of other political activists remain in jail — a reminder that the international media focus on the region weighs the value of lives very differently.