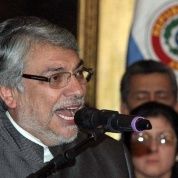 Lugo, who was elected in 2008 and broke the six-decade-long rule of the right-wing Colorado party, formed part of the progressive wave of leaders elected through Latin America. An adherent of liberation theology, the former Catholic bishop arrived to the presidency thanks to his commitment to implement reforms in favor of the long-neglected poor in the country.

Lugo faced opposition from the powerful political establishment in Paraguay, who impeded his efforts at nearly every turn.

Campesino organizations, unwilling to sit idly by as politicians impeded any sort of meaningful land reform, continued with tactics to recover land such as occupation.

One such occupation, in the municipality of Curuguaty, set off a series of events that would eventually lead to the “parliamentary coup” against Lugo’s democratically-elected government.

In May 2012, campesinos occupied Campos Morumbi estate, allegedly belonging to Blas Riquelme, a powerful political figure within the Colorado party.

Campesinos said Riquelme had acquired the land under questionable circumstances during the military dictatorship of the tyrant Alfredo Stroessner.

On June 15, 2012, the Interior Ministry gave the order to evict the campesinsos from the land. Over 300 heavily-armed police officers arrived at the disputed land to evict approximately the 50 campesinos who were occupying the land.

What followed has not been credibly established, however a violent confrontation ensued, leaving 11 campesinos and six police officers dead.

Relatives of the killed campesinos pin the blame on the police, accusing them of perpetrating a massacre. Meanwhile the police claim they were defending themselves.

Justice has been repeatedly denied to the victims, which the judicial process frequently stalled, the most recent interruption occurring June 15, when a long-awaited trial was once again suspended.

What did happen expeditiously was the political trial by Lugo's right-wing opponents, who used the massacre to justify his ousting.

On June 21, 2012, the two establishment political parties, the Colorado party of the Stroessner dictatorship and the right-wing Liberal party launched impeachment proceedings against Lugo.

A day later, having been given only two hours to prepare his defense, the Paraguayan Senate, dominated by opponents, voted to impeach Lugo and remove him from office.

Despite using instruments contained within the constitution, the impeachment was widely interpreted as a coup and was condemned by other leaders in the region.

"I believe they utilized the death of innocents to carry out plans that were pre-established as part of a conspiracy," said Lugo in response to the proceedings against him.

Evidence and testimony suggests that series of events leading to the impeachment of Lugo were indeed a premeditated plan.

According to an interview by Al Jazeera with Paraguayan special forces officer Jose Almada, the operation was highly irregular from the outset. With security forces being sent in with live ammunition and no attempt at negotiations before the eviction, a departure from protocol in these types of evictions.

Relatives and survivors of the massacre allege that many of the victims were not killed by the exchange of gunfire but rather that they were executed.

The speed at which the political trial was conducted suggests Lugo's opponents were uninterested in addressing the crisis generated by the Curuguaty massacre. Argentine Foreign Minister Hector Tímerman confirmed that, despite the efforts of the Union of South American Nations, opposition politicians were dead-set on Lugo's removal.

Lugo opted not to fight his ousting and was quickly replaced by his vice-president, Federico Franco, a member of the Colorado party who had earlier broken with the president.

The news that now dominates Paraguay's headlines detail repression against social movements, targeted assassinations of journalists, and allegations of links between politicians and drug traffickers. President Cartes himself has been accused of links to organised crime.

Social movements now march through the streets of the capital of Paraguay not only to address social issues but also to protest what they deem to be impunity and the apparent infiltration of organized crime into the political establishment.