Paraguay will hold its seventh democratic election since 1989, when a military coup ended Alfredo Stroessner's 35-year-long military dictatorship. On Sunday April 22, over four million people will choose new national authorities, including the president, vice-president, 45 senators, 80 representatives, and 17 governors for the period 2018-2023. 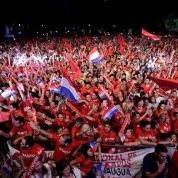 According to two polls conducted in April by First Analisis and ICA Mario Abdo Benitez, of the ruling National Republican Association, also known as the Colorado Party, is the most likely winner with an average 20 point lead over Efrain Alegre of the Authentic Radical Liberal Party, which despite its name, it also falls within the conservative political field of the small South American country.

Both candidates have endorsed the repressive political agenda of the Catholic church-backed ProVida, or ProLife, organization which opposes the legalization of abortion and same-sex marriage.

They also agree that a constituent assembly is needed to reform the Judicial power to eradicate corruption and legal insecurity, and on the need to better fund the education system.

Unlike Benitez, Alegre is offering free access to health care and a reduction in electricity prices. And Benitez has proposed compulsory military service and an increase in taxes without threatening foreign investment.

Despite their similarities the ICA poll estimates the Colorado Party will win 17 or 20 senate seats, while the Liberal Party is expected to take 10 and the Guasu Front would secure five or six. The remaining parties would have 10 seats.

The Colorado Party’s electoral predominance is not unusual; it was the ruling party between 1946 and 2008 until former President Fernando Lugo’s victory in 2008 thanks to a broad coalition named the Patriotic Alliance for Change, led by Lugo’s Guasu Front.

As archbishop of San Pedro, one of Paraguay’s poorest and most conflictive zones, Lugo was seen as close to Campesino struggles and social demands, which won him distrust by the countries traditional parties and landowner elites.

After 4 years in power, the Colorado Party-dominated legislative ousted Lugo using the Curuguaty massacre of June 2012 as an excuse, which many on the left in the region labeled a parliamentary coup, while then-leftist governments in Ecuador, Nicaragua, Bolivia, Brazil, Argentina and Venezuela called a coup

The massacre in which six police officers and eleven Campesinos were murdered was the result of a violent eviction of Campesinos who had occupied a large farm, property of a former Colorado Party senator, to protest the lack of access to land and demand agrarian reform.

Less than a week later Congress accused Lugo of “negligence, ineptitude and improvisation.” Legislators also argued Lugo “governs promoting hate among Paraguayans, violent struggle between the rich and the poor, vigilante justice, and the violation of the right to property, threatening the Constitution, republican institutions, and the rule of law” (Castells and Castells, 2012).

The alliance between the Guasu Front and the Liberal Party was shattered during the impeachment process, when all but one Liberal legislator voted with the Colorados in support of Lugo’s impeachment.

After the parliamentary coup Lugo ran for the Senate and won and in 2017 he was elected president of Paraguay's Congress, and he is running for national senator again in the 2018 general elections. The ICA poll projects a new victory, highlighting his strength is in the rural, "interior" region.

Despite what some called a Liberal betrayal of the Guasu Front, they have united again for the 2018 elections. This time they have been unable to recreate the broad coalition capable of fracturing Colorado hegemony in 2008.

Despite the alliance, the issue of land tenure and inequality in Paraguay has not gained center stage.

According to Marcial Gomez, of the National Campesino Federation, “rural areas have the greatest percentage of people living in poverty and extreme poverty, but in the last years you see misery belts growing in the capital and the urban periphery as a result of the expulsion of Campesinos and Indigenous communities.”

The marginalization of rural communities, including Indigenous peoples and Campesinos, is well illustrated in the 2016 court decision to sentence Campesinos involved in the Curuguaty massacre to up to 30 years in prison for the deaths of six police officers, while no investigation was launched into the deaths of 11 Campesinos in that same event.

In the 2013 elections, which followed the 2012 parliamentary coup, the Colorado Party regained control, winning the presidency, a simple majority in the senate, an absolute majority in the chamber of representatives, and 12 of the 17 governorships.

The Colorado Party’s electoral strength, which benefits Mario Abdo Benitez is the inheritance of the party’s repressive past and client-patron relations consolidated during Stroessner dictatorship (1954-1989).

Strossner's is one of the longest dictatorships in Latin America. Even before aligning with the C.I.A.-sponsored Plan Condor he was responsible for the political persecution of his opponents, most fiercely the Communist Party and anyone affiliated with it.

Historians estimate there were 20,000 arbitrary detentions, 60 extrajudicial executions, and 336 disappearances during his 35 years in power.

Intimidation tactics, and outright state brutality was not Strossner's only strategy. According to political analysts, through his control of state institutions he ensured that anyone who wanted to be a public servant had to be registered as a member of the Colorado Party.

The phrase “to be Colorado is the best way to be Paraguayan,” euphemistically captures that reality.

That historical context explains why today, the Colorado Party remains the strongest political force with almost 2 million members in a country that has a little over four million voters.

Benitez, this elections’ Colorado candidate, has been criticized for his closeness to Strossner’s government because his father was Strossner's private secretary. Benitez has responded by saying he is “proud of his father,” saying the Colorado Party wants “to look to the future, not to the past,” and raising the possibility of uniting “the children of Stroesnerism and the children of exile.”