The expansion of oil palm plantations around the tropical world presents a fierce assault on the climate in the name of corporate profits. While the industry green-washes palm oil under the guise of biofuels and so-called sustainable development, digging behind the corporate myths reveals a complex mess of deforestation, pollution, “carbon debt,” and destruction of biodiversity, wildlife habitat, and food security, often along with grave human rights abuses. 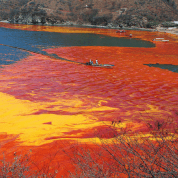 Global palm oil production has been on the rise since at least the 1970s, and the proclaimed biofuels hype has given the industry a boost since the early 2000s. Oil palm production has massively ballooned in Indonesia and Malaysia, the two largest producers representing some 85 percent of global production. But expansion has also been significant in Latin America, where Colombia, Ecuador, Honduras, and Guatemala are all now within the top 10 largest and fastest growing palm producers in the world.

Oil palm plantations are expanding through massive deforestation, which increases carbon emissions. Clearing mature forests, which sequester huge amounts of carbon, releases carbon into the atmosphere and wipes out future carbon storage, often permanently. According to the World Wildlife Fund, the equivalent of 300 football fields is cleared every hour to make way for oil palm plantations. Converting rainforests and other tropical habitats like grasslands and peatlands into oil palm plantations creates a major “carbon debt” that could take as long as centuries to repay - clearly too late for urgent action on climate change.

A maze of plantations in Indonesia where Borneo forest has been cleared to make way for oil palm. I Photo: AFP

According to Tanya Kerssen, an independent researcher based in Latin America, palm oil production brings a whole web of negative impacts for the environment.

“Perhaps the worst impact, globally, is the massive destruction of forests, peatlands, and other diverse ecosystems that are home to people and wildlife,” Kerssen told teleSUR, stressing that there is no single impact. “These areas are critical for regulating hydrological cycles - including rainfall and groundwater levels - maintaining good water quality, preventing erosion, and controlling flooding. They also capture carbon from the atmosphere and sustain diverse types of subsistence and commercial food production.”

Palm processing waste also produces emissions. These waste products release a huge amount of methane gas, which traps more heat than carbon dioxide and contributes to global warming. According to the U.N., between 2.5 and 3.75 tons of industrial waste are generated by each ton of a palm oil produced. What’s more, if a wastewater pond ruptures, it brings a flood of contamination to the surrounding ecosystem. Runoff from oil palm production, even without a waste storage failure, already contaminates soil and water due to the heavy use of chemical fertilizers, herbicides, and other agrochemical inputs. This can wreak havoc on wildlife habitats and communities and jeopardize other agricultural production.

IN DEPTH: Latin America's Fight for a Just Climate Solution

Finally, oil palm in its industrial form is farmed as a single crop on massive plantations, known as a monoculture, which poses threats to local biodiversity, including agricultural and food diversity. As Kerssen explained, “the original sin of the palm oil boom is land grabbing - the taking over of natural areas or community lands and destroying any possibility of creating sustainable alternatives on those lands.” That is, aside from converting forests and decimating habitats, oil palm monocultures often also displace local agriculture with negative impacts for food security, food sovereignty, and local environmental conservation.

The environmental crisis of oil palm is perhaps most clear in Indonesia, the world’s largest palm oil producer, where raging forest fires have recently caught global attention and forced the country to declare a state of emergency. Huge swathes of forest have been converted to oil palm plantations, releasing huge amounts of carbon dioxide with slash-and-burn clearing techniques and decimating precious wildlife habitats. According to the World Wildlife Fund, orangutans have lost more than 80 percent of their natural habitat in Indonesia in the past 20 years. Raging forest fires have also had serious impacts on human health and spawned a national public health crisis. What’s more, palm expansion is also fueling a human rights crisis in Indonesia, as symbolized by the murder of an Indonesian environmental and anti-palm oil activist earlier this year.

In Colombia, the largest palm producer in Latin America and fourth largest in the world, oil palm plantations have expanded through deforestation and displacement. While the industry prides itself on expanding largely into low-productivity grasslands instead of tropical forests, these same zones are often cleared of their human inhabitants through paramilitary violence. The Colombian government, in concert with paramilitaries and big agribusiness, has “violently removed” Afro-Colombians, Indigenous people, and campesinos to make way for palm monocultures, according to the food and development policy institute Food First. What’s more, Rainforest Rescue reports that a supplier of so-called organic and ecological palm oil in Colombia, Daabon Group, has been found responsible for “serious accidents and spills, excessive use of water, pollution, deforestation and the eviction of small farmers from their land.”

“Dead fish on the banks of Guatemala's Pasion River.” I Photo: De Guate

In Guatemala, oil palm plantation expansion similarly threatens the health and food sovereignty of local communities. A recent case of massive contamination in Guatemala’s Pasion River highlights the extent of damage to the environment and public health caused by the palm oil’s industrial waste. The Pasion River was declared an ecological disaster after thousands of dead fish surfaced in June as a result of agrochemicals pollution from a nearby palm oil production site. The water contamination also severely impacted local families who rely on the river for drinking water, hygiene, and as a food source. The targeted assassination of Rigoberto Lima Choc, a Guatemalan environmental and human rights activist fighting the contamination of Pasion River, is also a particularly egregious example of the abuses caused by the rapidly expanding industry in the region.

Investment in oil palm expansion is one of the World Bank’s prioritizing projects that have appealing qualities for investors and agribusiness corporations, but devastating effects for small farmers and the environment when farmed in its industrial form as a monoculture.

Oil palm is an edible oil crop that can be sold for multiple uses as a “flex crop,” a term used to describe a single crop that can be sold for food, animal feed, fuel, and industrial products. In the case of oil palm, these “flexible” uses include for cooking oil, food additives, cosmetics, industrial uses like plastics and explosives, and biofuel. This is what sets oil palm apart from other industrial crops in the eyes of investors and makes it perfect fodder for financial speculation.

As Kerssen explained, financial speculation and the potential to sell in multiple “diversified” markets maximizes return on corporate investment. “Oil palm is well-suited for the highly ‘financialized’ nature of our current global economy,” she explained, adding that “diversification” through a single crop makes investment “safer” because the flex crop can be sold for whatever purpose is most lucrative.

On the other hand, oil palm production reproduces historical inequality of the plantation system through land grabbing, displacement, and labor exploitation of campesinos, not to mention environmental consequences that have lasting impacts on the health and food security of local communities.

While the rapid expansion of oil palm plantations across the tropical world is often justified in the name of ramping up biofuel production, oil palm has a lot more to do with agricultural financialization than with green energy. But the “biofuel” label is leveraged to green-wash the destructive, often violent, expansion of agribusiness corporations, their profits, and their monopoly on land and resources across the global south.

Activists have slammed the Roundtable on Sustainable Palm, which purports to promote “sustainable development” and “green energy” through oil palm expansion, as “window dressing” to cover up the environmentally-destructive monopolization of land and resources and for turning a blind eye to land grabbing and grave abuses of human rights perpetrated by the industry.

According to Kerssen, author of “Grabbing Power: The new struggles for land, food, and democracy in Northern Honduras,” biofuel uses actually makes up a small portion of the palm oil agricultural portfolio, which as a flex crop bends to where it maximizes corporate profits.

“While you often hear about the expansion of oil palm as linked to ‘biofuels,’ non-fuel uses of oil palm are actually much more important both in quantity and value,” said Kerssen. “So obviously the demand for biofuels can't adequately explain the rapid expansion of oil palm plantations. As a ‘flex crop’ used as a flexible accumulation and speculative strategy, it makes much more sense.”

Palm oil’s use as a biofuel - of questionable efficacy to begin with given oil palm’s extensive carbon debt - is a very convenient label to green-wash huge corporate profits and financial speculation. By eliminating forests or local food production to make way for industrial monoculture, oil palm is doing damage to the environment and food security, albeit under the “green” banner of biofuels.

Some argue that there is no place for palm oil in a sustainable future. Others say that with rigorous regulation and oversight, palm oil could play a role in rural development without negative consequences for communities and the environment.

A coalition of NGOs recently called on the big players in the global palm oil trade to clean up their act with respect to grave human rights abuses and ensure that suppliers in Latin America are not guilty of rights violations.

Fruit of the oil palm from which oil is extracted. I Photo: AFP

But many are skeptical that the model of voluntary industry self-regulation regarding environmental and human rights standards will fall far short of substantial reform needed in the palm oil sector, which already green-washes its brutal track record.

For Kerssen, the high stakes will require larger transformation within the industry and beyond to achieve sustainability.

But for Kerssen, it’s important to consider whether large-scale palm oil production is really needed in the first place. She says digging into the issue of sustainability necessarily begs the question: “Why grow palm oil at all?”

“Currently the answer is because there is global ‘market demand,’” Kerssen explained. “But the main use for palm oil - refined vegetable oil and processed foods - is responsible for shortening lifespans and making people sick all over the world, particularly among the poor.”

In the face of this reality, Kerssen added, the big question is how to transform agricultural production to shift away from such a huge emphasis on unhealthy, environmentally and socially destructive palm oil to much more diversified farming practices that can “better sustain local economies and ecosystems and healthy people.”

“I think we can arrive at any number of interesting and creative solutions that involve continued oil production,” said Kerssen, “but it requires first asking the right questions.”