A Spandex-wearing athlete hurtling down an icy slope at 70 to 100 miles per hour sure makes for great TV, but what major sports channels often fail to mention is the catalog of injuries the young 20-something-year-old had to disregard to qualify for the Winter Olympics. 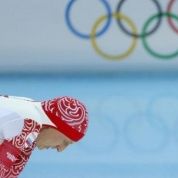 Brain trauma, fractured spinal cords, concussions, shattered knees, broken limbs, torn ligaments: these are only a few of the most common injuries associated with the Winter Olympics, but – as they say – the show must go on.

A quick glance at statistics from the last two events in 2010 and 2014 reveal a minimum of 11.2 percent of Olympic athletes experience at least one injury during the 17-day competition. Additionally, nearly 16 percent of snowboarding competitors suffered at least 30 cranial injuries; ten neck, shoulder, wrist, foot, ankle, hip or pelvis injuries, and 30 knee injuries.

Though each sport has its difficulties, among the most dangerous and – at times – life-threatening events are the bobsleigh, ice hockey, short-track speed skating, alpine skiing, snowboard halfpipe and snowboard cross.

TV analyst and pro-snowboarderCraig McMorris says "danger is essential." "Putting oneself in a risky situation and doing it with grace is really what action sport is all about. The athlete who can perform the most difficult trick, over the most high-consequence feature, with the most style, will win."

Although no competitors have ever died during the Winter Olympics, at least 10 athletes have been killed during practice training sessions prior to the actual games. Going back as far as 1939, the international competition has recorded a total of 12 deaths: two lugers, four skiers and six bobsleigh athletes.

The most recent deaths include U.S. luger Nodar Kumaritashvili in 2010; Canadian cross skier Nik Zoricic in 2012, and French skier and medalist David Poison in 2015.

However, these unfortunate incidents didn't stop the Olympic Committee from increasing the height of the freestyle snowboarding competition's half-pipe ramp an extra four feet in 2010.

Many former athletes and experts say that increased expectations from television audiences have seriously affected the demands imposed on participating athletes.

Former Canadian alpine ski racer Brian Stemmle, who encountered a near-death experience in '89, said: "High risk and high speed are what make the Winter Olympics sexy. The element of danger is constantly there in every sport."

In an interview with the Washington Post in 2010, Olympics historian David Wallechinsky said that though the Winter Olympics have always been dangerous, they're getting worse. "A lot of it has to do with maybe you want the ratings and danger is good for ratings. Perhaps not so good for the athletes. You do have to ask yourself what's going on."

Researchers have long warned of the negative effects continual exposure to media and violent entertainment can have on viewers' emotions. Numerous studies attest to noticeably increased levels of apathy in spectators, specifically towards victims of violent or dangerous situations.

In one study conducted by psychologists from the Universities of Cyprus, Queensland and Georgia, researchers analyzed the rate of public desensitization towards mainstream media. The scientists showed a series of comedic and violent film clips to a group of 100 students, recording their responses over both short and long time periods.

Psychologists Kostas A. Fanti and Eric Vanman said: "During the first scenes participants reported that they enjoyed the violent scenes less and reported more concern for the suffering of victims. With repeated exposure, however, the psychological impact of media violence was reduced and participants indicated feeling less sympathy for violence victims and started enjoying more the violence portrayed in the media scenes.

Christopher C. Henrich, and Marios N. Avraamides then concluded: "Therefore, following the previous research, our findings suggest that... after repeated exposure (viewers) became desensitized to media violence and reported that they actually enjoyed the media violence more (than comedy)."

Since the last Winter Olympics, athletes have opened up about their injuries and the dangers behind the high-level competitions only to have their concerns dismissed as the price paid for the life of a sports star.

However, at the end of the 17-day event, only a handful of Olympic athletes bring home a medal. The rest return to their homes and their minimum-wage jobs. A recent article in Time magazine provided an inside look at the daily lives of Olympians.

Emily Samuelson competed at the highest level as an ice dancer over the course of her 15-year career, retiring after skating in the 2010 Vancouver Olympics. Like many Olympians, she never earned enough to cover her expenses and returned home to US$50,000 of debt. Luckily, unlike many of her colleagues, she was able to find employment after the Olympics.

Outside of the glamorous two-week exposure on global television, Olympians live an ordinary life. However, the risks taken to meet the physical demands of a sports career could easily destroy their only means of a stable income and send it all toppling down.

Russian skier Maria Komissarova was one of the first in the 2014 Sochi Olympics to suffer severe injury after a terrible crash left her with a fractured spine and a six-and-a-half hour surgery involving a metal plate and numerous stitches.

Olympian historian Wallechinsky called the moguls a "punishing sport." "In moguls they all get injured. That's just part of it. Your knees are never going to be the same again."

Despite the medical evidence proving an increase in injuries, and two deaths in ten years, International Olympic Committee spokesman Mark Adams defended the event in 2014, saying the association didn’t see anything unusual about the number of injuries and accidents as compared to any other past event.

Freestyle skier and 2014 Sochi silver medalist Kelsey Serwa explained that many athletes are often forced to disregard their health out of fear. They are convinced that bringing attention to their injuries will cost them their positions on the Olympic team and, considering the poor attention given to proper self-care, their fears are well founded.

"Our sport is so competitive, as are a lot of Olympic sports," Serwa says. "Some athletes are afraid to voice how they're doing inside, symptoms and stuff, because there's depth in Canada, which is great but there's always people chomping at your heels."

During an interview, British snowboarder and medalist Zoe Gillings-Brier described her Olympic experiences: "The biggest one was crushing my left foot in 2005. Broke all the bones in the middle of it. It looked like Cornflakes apparently," she told the Telegraph.

"It was supposed to stop me snowboarding altogether but I kept going. I've had a torn ligament in my knee, torn cartilage in my other knee, ligaments in my shoulder, about six concussions, broken collar bones. That's about it.

"You have to make (the performance) big to make it challenging and look good on TV."

TV analyst McMorris said: "Would the downhill be great if racers weren't riding on the edge of control and risking falls at high speeds? Would hockey be great if it was non-contact?"

However, the adrenaline rush is hard to justify when considering the untimely death of Georgian luger Kumaritashvili. The luger was killed while attempting to complete a U-turn, referred to as the "50-50 turn" due to the fact that track runners have a "50-50 chance" of crashing.

According to McMorris, it's the unpredictability of the Winter Olympics that attracts millions of contestants and sports fans to the scene. "Anything can happen and often does," the analyst said.

As world athletes line up and the Olympic Committee harnesses those final sponsors while spectators take a seat, you can't help but wonder: who's really running the show? If it's the public, how far will people go and when will they draw the line?