Today marks the 72nd anniversary of the Nakba, or catastrophe in Arabic, which is commemorated every year on May 15, just a day after Israel celebrates its own founding. 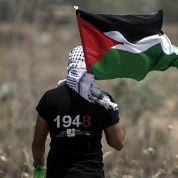 Hating Arabs as a Common Ground: Why Israel's Coalition Government is Likely to Survive

Seventy-two years ago, the 1948-1949 Israeli-Arab war was started, and by its end, the newly established Jewish state had expanded its control over almost 80 percent of historical Palestine. Of the 900,000 Palestinians who had been living on their lands for centuries, an estimated 156,000 remained in Israel, while the rest became refugees.

Entire villages were dismantled, scattered into separate communities with no self-determination. Palestine was wiped off the map, replaced by new terms such as the West Bank and the Gaza Strip while the displaced people lost homes, lands, and properties; many enduring until today miserable conditions in refugee camps in neighboring Arab countries, including Lebanon, Syria, and Jordan.

For the people in Palestine, the Nakba was and remain mostly about despair, helplessness, traumatic uprooting, and humiliation. It symbolizes the sudden and still ongoing destruction that plunged them in chaos at all levels, political and economic, psychological, and identity.

In one single blow, the Nakba destroyed all the worlds which constituted Palestinian realities. For many, there was a dynamic, thriving society oriented toward the future. But that society was nipped in the bud by a catastrophe that marked a new era dominated by estrangement and often poverty for the Palestinian refugees and their descendants.

This is, in short, the meaning of the Nakba.

Though the Nakba is commemorated on May 15 of each year, it was, in fact, the result of several intense moves intending to clear the Palestinian land of its indigenous inhabitants in order to create a homogenous Jewish society. This is why, for the Palestinians, the Nakba is not a historical event but an ongoing process.

A grim future for the project of a Palestinian state

After decades of conflict, and crimes of all kinds committed against the people of Palestine, this year's 72nd commemoration comes amid what looks like a grim future for the Palestinian cause and its project of a sovereign and united state.

Since far-right United States President Donald Trump came to office three years ago, his administration has been overtly and passionately promoting the interests of Israel.

In December 2017, the U.S. president recognized Jerusalem as the Israeli capital, going against the international community’s position of maintaining that the status of the disputed city has to be settled by the Israelis and the Palestinians themselves.

East Jerusalem has been under illegal Israeli occupation since the 1967 war, and the Palestinians seek it as their capital for any future state. Yet, on the 70th anniversary of the founding of Israel -on May 14, 2018- the U.S. officially moved its embassy from Tel Aviv to Jerusalem.

In early 2019, the U.S. cut all funding to the U.N. agency that supports Palestinian refugees (UNRWA) using its fiscal practices as an excuse.

Since Palestinians were forced to flee their homeland and became refugees, the U.N. agency has been providing essential services including health and education to millions in the camps. As the U.S. was its major funder, it is not clear how longer the agency will be able to maintain its activities and services.

The U.S. took another unilateral decision in March 2019 and announced that it recognized Israel’s sovereignty over the highly strategic and resource-rich Golan Heights, captured from Syria in 1967.

In the same vein, U.S. Secretary of State Mike Pompeo broke international consensus in November 2019 when he said his country no longer considered Israeli settlements on Palestinian land as illegal.

The tumultuous month of January 2020 was above all marked by Trump’s unveiling of his so-called “Deal of the century” to address the conflict in the Middle East.

The plan was flatly rejected by Palestinians as fulfilling a wish list of Israel’s demands. The deal would let the Jewish state impose sovereignty all the way to Jordan while Palestinians would be granted a disjointed and demilitarised entity along with promises of investment. The Palestinian state's capital would be on the outskirts of Jerusalem, with the disputed city fully under Israel’s sovereignty.

Trump’s proposal led some political commentators to say the intent was not to find a way out to the conflict but to legitimize Israeli occupation.

Finally, last month, the U.S. announced it would recognize the annexation of occupied Palestinian land, giving its greenlight to right-wing Prime Minister Benjamin Netanyahu to move ahead with the de facto annexation.

On the other hand, the Arab political context has been changing over the years at the disadvantage of the Palestinian struggle and the question of normalizing relations with Israel is not as taboo anymore, as it used to be.

In fact, the pace of normalization has considerably gained momentum on several fronts, including politically, economically, militarily, and even culturally.

Main developments since the start of 2020 include for instance the participation of United Arab Emirates, Bahrain, and Oman ambassadors in the White House unveiling ceremony for the "Deal of the Century;” the meeting between Netanyahu and General Abdul Fattah Al-Burhan, the chairman of Sudan’s ruling Sovereign Council, in Uganda, where both agreed to start cooperation; or the reported talks to hold a "historic meeting" in Egypt between Netanyahu and Saudi Crown Prince Mohammed Bin Salman, among many other steps.

The role of the international community

If the Trump administration is able to act so freely, to go against international laws as it sees fit in order to facilitate and to give legitimacy to Israel’s colonial projects, it is due to the long tradition of impunity for colonial violence granted to that country, with the tacit approval of the whole international community.

“Had it not been for the protected status accorded to Israel by Western states that has shielded it from sanction no matter what it did, the course of Palestine's modern history would have been wholly different,” former research fellow at the University of Exeter, Ghada Karmi, told the Middle East Eye.

“If Israel had been a normal state, accountable for its conduct and subject to punishment and sanction, it would not have been allowed to expel the natives of Palestine, or refuse their return, or acquire their territory by force, or subjugate and besiege them, or the myriad other crimes it has committed against them.”

“There would have been no Nakba to commemorate on 15 May and no refugees, and Gaza would be free.”

In July, Netanyahu is expected to start putting forth legislation for annexing the occupied West Bank.

If the international community once again refuses to take a firm and inflexible stance against the U.S.-Israeli annexation plans, if it refuses to connect the great displacement which took place during the Nakba, all those who have taken place since, and the one to come, with a clear aversion on Israel’s part to conceive and accept the very idea of a sovereign and free Palestine, then another blow will be dealt to the cause and the status quo situation will continue with its share of dispossessions and deaths.

Over 37 Palestinians have been murdered just today as protests against the U.S. Embassy relocation to Jerusalem as the March of Return continues in the lead up to the 70th anniversary of the #Nakba tomorrow. #FreePalestine #Nakba70 pic.twitter.com/CAYjB3j6Vy