On Monday, some Latin American countries are celebrating the Day of the Indigenous Resistance, instead of Christopher Columbus' non-discovery of the continent in 1492 and the beginning of its so-called "civilization." 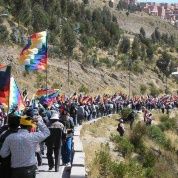 Following the proposal of then president of the Ibero-American Union, Faustino Rodriguez San Pedro in 1913, Latin American governments began to pay tribute every October 12 to the “enrichment” that the Spanish mixing with indigenous peoples represented, under the disgraceful name of “Day of Race” — and “Day of Hispanity” in Spain.

However the so-called “discovery” of the America caused the worst demographic catastrophe of human history, with around 95 percent of the indigenous population annihilated in the first 130 years of colonization, according to the U.S. Professor of Anthropology Henry Farmer Dobyns – without mentioning the victims from the African continent, with about 60 million people sent to the Americas as slaves, and only 12 percent of them arrived alive.

With the rise of progressive governments in the Latin American region over the past decade, indigenous peoples have been able to find a better ear to their requests, like the change of the name “Day of Race.”

Venezuela was the first country of the region to grant the demand under Hugo Chavez's administration, accepting their suggestion of “Day of Indigenous Resistance” in 2002. Chavez described the previous name “Day of Race” chosen by then President of Venezuela, Juan Vicente Gomez in 1921, as “discriminatory, racist and pejorative.”​

Nicaragua and Daniel Ortega´s Sandinista government (center left) has been the only country going as far as Venezuela until now, also choosing the name “Day of Indigenous Resistance” in 2007.

With several exceptions, such as the conservative governments of Paraguay, Colombia and Honduras, for instance, many other countries of the continent have nevertheless changed the infamous name “Day of Race.”

Yet the indigenous communities of Argentina organize counter-marches to protest against this name, recalling the damages caused by the conqueror Julio Argentino Roca to their ancestral lands at the end of the 19th century.

In Chile as well, where the Mapuche community are still fighting to claim their native lands in the fertile south of the country, the day was renamed even more weakly, “Day of the Encounter Between the Two Worlds” in 2000.

In Ecuador, President Rafael Correa changed the name to “Day of Inter-culturality and Pluri-nationality” in 2011. That same year in Bolivia, President Evo Morales, the first indigenous leader in South America, changed it to "Day of Mourning for the Misery, Diseases and Hunger Brought by the European Invasion of America." The diseases were indeed the main cause of the indigenous genocide, as the invaders brought viruses and bacterias the indigenous peoples were not immune to.

Last year, Salvadorean and Uruguayan indigenous peoples began demanding a name change of their governments. The Charrua community of Uruguay for instance has made the demand since 2010, but has faced strong opposition by conservative sectors. In 2014, the National Assembly approved a legislative project, but only changed the name to “Day of Cultural Diversity.” The ruling party Broad Front (Frente Amplio) had pushed for the same name as in Venezuela and Nicaragua, but the legislative commission then chose to modify it.

In El Salvador, social and indigenous organizations presented a legislative project before the parliament, for which the congresspeople of the governing Farabundo Marti Front (FMLN) expressed their support. In June 2014, the congress finally approved a constitutional reform recognizing the existence of indigenous peoples in the country.

Indigenous peoples in Latin America account for about 13 percent of the total population – about 40 million, with around 670 different nations or communities, according to the CEPAL. Most of them are in Mexico, Guatemala, and Andean countries. They all face some evel of racism, discrimination and poverty, suffering more than the rest of the population from an unequal access to resources like employment, health and education services, but also deprived of their ancestral lands and natural resources – about 40 percent of rural populations are indigenous, according to the International Work Group for Indigenous Affairs.

Recently however the indigenous people have increased their levels of organization, communicating their issues to a larger audience, and receiving greater international attention. The arrival of new progressive governments has also contributed to granting them legal recognition of their basic political, social and economic rights and cultural identity.

However, there is a long way to go before such rights are truly respected and implemented. The extractivist model designed to attract foreign investment and take advantage of the numerous natural resources available, especially on the lands traditionally owned by indigenous communities, is a threat.

Latin American governments will have an important opportunity to show their support for indigenous communities soon, at the United Nations Climate Change Conference in Paris in December. Climate change remains one of the greatest challenges for indigenous peoples, whose cultural and economic survival strongly depend on Pachamama (Mother Earth in the Andean region).