Some journalists only have eyes for the latest conspiracy theory related to Russia. How else to explain the falling trust in "western-democracies" and the decline in credibility for western media? It's easy, blame Russia! 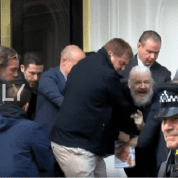 RT's news agency Ruptly almost stole the show when British police forces dragged Wikileaks founder Julian Assange out of the Ecuadorean embassy for his arrest. The "world-exclusive" images captured by the international news agency seemed to raise eyebrows for some of the world's major privately-owned news outlets, subtly hinting at a conspiracy between Wikileaks and the Russian government.

For some it was hard to grasp why a "niche media outlet" like Ruptly could be the only agency with actual video footage of the arrest. This fact was enough for some news outlets to hint at a possible connection between Wikileaks and the Russian government, by including the "Russian-backed TV crew" into the headlines of perhaps the biggest news story of 2019.

The dramatic footage of a handcuffed Julian Assange being wrenched by police from Ecuador’s embassy in central London was caught by just one news organization: a Russian-backed film crew https://t.co/VOD5lvxU2p

However, great disappointment must have followed upon a deep investigation by CNN. Or in other words, actually just reaching out to Ruptly's deputy head of news, Laura Lucchini, asking her how this important moment was captured on camera?

You guessed it, there is no secret telepathic way for Julian Assange to communicate with Russian President Vladimir Putin. Julian Assange’s lawyer in Ecuador, Carlos Poveda, even said Thursday that he was not notified of his client's asylum termination.

The Ruptly team was actually just very committed to the story, providing 24/7 coverage outside the embassy.

"For the last week, we closely monitored developments on this story while our team of producers worked in shifts, filming the embassy 24/7. On many of these days and nights, there were no developments. We saw camera crews come and go. But we stayed. We believe those images hold great news value," reads the official statement published by Laura on twitter.

However, despite having cleared up the latest Russian conspiracy theory, the headlines stand. Perhaps the main reason why the titles remain as steadfast as the "Russian-backed TV crew" infront of the Ecuadorean embassy in London, is the fact that six out of 10 people actually just read headlines and never the actual article, according to a recent study by Columbia University and the French National Institute.

It seems, we will never really run out of the latest Russian-based conspiracy theories until Hillary Clinton is actually elected president of the United States or perhaps she can just declare herself president, apparently that's a thing now.