After receiving the presidential sash in the Mexican National Congress, President Lopez Obrador gave a speech outlining an ambitious and encouraging government plan, based on bids to slash corruption, overturn neoliberalism and make important public investments. 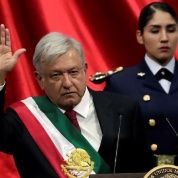 RELATED:
'Neoliberalism Has Been a Calamity:' Mexico's AMLO Sworn In

AMLO started his speech by thanking outgoing President Enrique Peña Nieto: "Mainly I recognize the fact of him not having intervened, as did other presidents, in the last presidential elections."

AMLO had previously claimed that the last two presidential elections were stolen from him. It is a good thing that the Mexican authorities, especially "the acting president, respect the will of the people," he said.

"By mandate of the people, we begin today the fourth transformation of Mexico." AMLO wants to trigger a turning point in Mexican history that would be comparable to three other historic moments: Independence, a movement mainly led by Miguel Hidalgo, which liberated Mexico from around 300 years of Spanish domination; the Reform, a struggle between liberals and conservatives, which gave the "laws of the Reform" (one of the most important was the separation of the Church from the State, mainly protagonized by Benito Juarez); and the Mexican Revolution, a war to end the 30-year regime of Porfirio Diaz, after which the current Mexican Constitution was established.

AMLO has long talked about the fourth transformation of Mexico, in which he aims to change the political regime. Saturday, he said, started a "peaceful and orderly transformation, but at the same time deep and radical because it will end corruption and impunity that prevent the rebirth of Mexico."

AMLO's narrative, from before being elected president, has had the fight against corruption as one of its central pillars. "The crisis in Mexico was originated not only by the failures of the neoliberal economic model applied during the last 36 years, but also by the predominance, during this period, of the most filthy corruption, both public and private." Nothing has damaged Mexico more than the corruption of the people governing the country, and that tiny minority that profits from influences and "lobby."

"Neoliberalism is corruption,"he continued. "It sounds strong, but privatization in Mexico has meant corruption." Economic management during the neoliberal period, from 1983-2018, "has been the most inefficient of Mexico's modern history." Adding to this, due to the concentration of wealth in a "few hands, the majority of the population has been impoverished."

President Lopez Obrador emphatically distanced himself from the 40 years of neoliberal politics that have led Mexico into unprecedented economic crisis. "I say it without ideology: neoliberal politics has been a disaster, a calamity for the public life of the country. For example, the energy reform they said would come to save us has only caused the lesser production of oil and the excessive price increase of energy."

The energy reform, approved in 2013 by his predecessor Peña Nieto's government, translated into the gradual privatization of oil in Mexico, one of the only countries in Latin America that previously had full control of this natural resource, expropriated in 1938 by Lazaro Cardenas.

"Before neoliberalism, we produced and were self-sufficient in gas, diesel, energy. Now we buy more than half of what we use. In this period the purchasing power of salaries has been slashed by 60 percent," AMLO said, arguing that Mexico's minimum wage is among the lowest in the world.

Mexico, he continued, "is in 135th place for corruption out of 172 countries evaluated (by Transparency International), emphasizing that corruption and neoliberalism have been interlaced in the country. During the neoliberal period, the whole system has operated for corruption. The political power and the economic power have nourished themselves mutually. The stealing of the goods of the people has been the modus operandi."

The solution? "If you ask me to express in one sentence the new government's plan: to end corruption and impunity," AMLO told the cheering audience. Highlighting the importance of achieving the separation of political and economic power, he said: "The state will stop facilitating the pillage. It will stop being a committee for a rapacious minority. There cannot be a rich government with a poor people."

The new government won't focus on revenge or trying to capture everyone who's corrupt because "there wouldn't be enough courts and prisons," AMLO said, stressing that he will focus on preventing future crimes instead of prosecuting former state officials.

Speaking about "putting a full stop on this horrible page of history," AMLO was interrputed by the audience counting to 43 in reference to the 43 forcedly disappeared Ayotzinapa students. AMLO said abuses of power will be prosecuted and promised that he would never order the repression of the people, nor "will we cover up violations of human rights."

"The government will represent all Mexicans, there will be authentic rule of law... but we will give priority to those who are the most vulnerable," he said. He also stressed the importance of popular consultations during his government, in order to restore the power of the people and resurrect a "real democracy."

"Republican austerity and the fight against and corruption will free enough resources for development. We will not need to increase taxes, and that is a commitment. The price of gasoline will not increase beyond inflation." Austerity is based on the elimination of "unnecessary expenses" of the state: "The salaries for those on top will be reduced because the salaries of those in the bottom will increase."

AMLO also proposed an increase in public investments to overturn neoliberal policies. The construction of at least two refineries and the recovery of six others will reduce energy prices, he said.

For "the wellbeing of our people, the plan is to combat poverty and marginalization as has never been done in history. Today, I formally present constitutional reforms to establish the welfare state and guarantee the right of the people to health, to education and social security." Aiming for social justice and to reduce inequality based on public investment and on the help from the government to surpass "neoliberal hypocrisy. Those who are born poor will not be condemned to die poor."

"We won't give our backs to young people, and we won't insult them by not giving them opportunities to work and study," he said. Retirees and people with disabilities will also be afforded better opportunities and government assistance.

"We want migration to be optional, not compulsory. We are going to make Mexicans happy where they were born, where their families and roots are," AMLO said.

Subsidies will be given to farmers and to the people who produce wellbeing in Mexico, giving credits that are "backed up only on their word... a basket containing basic foodstuffs to fight malnutrition and hunger will be sold at a fair price."

AMLO also announced the banning of "fracking and transgenic (foods)," in Mexico.

And he called for cooperation and collaboration with all the peoples of the world, based on self-determination. "Mexico will not stop thinking of Simon Bolivar and Jose Marti," and will start looking more and more towards Latin America, he said, stressing the importance of the region's integration.

AMLO concluded by saying that the national problems are big, but with the cultures and strength of the country's people Mexico can continue advancing.

"I'm optimistic. We are beginning and are on the road to the rebirth of Mexico. We will become a model country, by ending corruption. We will build a society that is more just, democratic, brotherly and always happy."

The only thing Mexico needs now is a good government, AMLO said, vowing that his administration will work to change the country in such a way that it becomes almost impossible to roll back any advances.