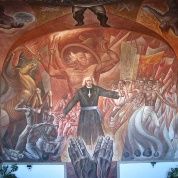 A diaspora of people with ancestry from Spain, Mexico, the Caribbean, Central and South America continues to celebrate the diverse and dynamic Hispanic culture on this day. September is also known in the United States as National Hispanic Heritage Month.

The historical, political and social underpinnings leading up to the independence of Mexico and Central America reveal a common and ongoing struggle.

From the 16th century through to 1821, Central America formed the Captaincy General of Guatemala, composed of a part of the state of Chiapas (now Mexico), Guatemala, El Salvador, Honduras, Nicaragua, and Costa Rica. Officially, the Captaincy was part of the Viceroyalty of New Spain and therefore under the auspices of the Spanish viceroy in Mexico City. It was, however, administered by an independently appointed Captain General located first in Antigua Guatemala, and subsequently, in Guatemala City.

An estimated 240,000 Spaniards emigrated to America, and in the 17th century, some 500,000 more followed, predominantly to Mexico and Ecuador, but spreading out all across what is now Mexico, Central and South America.

The Spanish Conquest resulted in the death of 70 percent of Indigenous peoples in Central America, 90 percent in South America, and almost 100 percent in the Caribbean. Between 1492 and 1609 (the founding of the English colony of Jamestown, Virginia) more than 50 percent of all indigenous peoples were wiped out in what became the U.S. The Spanish Conquest was per capita the biggest genocide in human history.

Many Spanish men had families with surviving indigenous peoples as they colonized their respective countries. This was also a common practice in the U.S. and Canada. The native people in what is now Mexico, referred to the time after the Spaniards came in their oral history as the "time of darkness and toil," as they were forced to work as slaves on Spanish plantations.

In 1811 and in 1814, independence movements erupted in El Salvador. Both revolts were easily suppressed and the political unrest was diverted into the general political events that influenced the Spanish Constitution of 1812. Between 1810 and 1814, the Captaincy General elected seven representatives to the Cadiz Cortes, the first national assembly to claim sovereignty in Spain, in addition to forming a locally-elected Provincial Deputation.

Many people outside of Latin America are not aware that five nations in Central America were part of a larger conglomerate after the block won its independence on Sept. 15, 1821. On that occasion, a congress of Central American Criollos, a social class in the original overseas colonies established by Spain of locally born people of pure Spanish ancestry, declared their independence from Spain.

When Mexico became a republic the following year, it acknowledged Central America's right to self-determination. On July 1, 1823, the congress of Central America declared absolute independence from Spain, Mexico, and any other foreign nation, including North America. A republican system of government was formed.

The Federal Republic of Central America, known as the United Provinces of Central America in its first year of creation, was a sovereign state in Central America, which consisted of the territories of the former Captaincy General of Guatemala of New Spain. It existed from September 1823 to 1840. But the Union of the states of Guatemala, El Salvador, Honduras, Nicaragua, and Costa Rica dissolved in civil war between 1838 and 1840, beginning when Nicaragua seceded from the federation on Nov. 5, 1838.

Various attempts were made to reunite Central America in the 19th century, but none succeeded for any length of time. Despite the failure of a long-term political union, the concept of Central American reunification resurfaced periodically. For instance, in 1856-1857, the region successfully established a military alliance to oppose William Walker, an U.S. lawyer, journalist and filibuster, who made himself president of the Republic of Nicaragua in 1856. He ruled until 1857, when he was defeated by a coalition of Central American armies. He was executed by the government of Honduras in 1860.

It is clear that September 15 is an important day for Costa Rica, El Salvador, Guatemala, Honduras, and Nicaragua — and Mexico — and rife with its struggles, defeats, and resurgences. However, the long history of struggles that led to independence for Central America and Mexico from Spain continue to be fought today in terms of immigration and economic independence.

Central American countries have increasingly come under pressure to join the General Agreement on Tariffs and Trade (GATT) and create trade partnerships with other North American Free Trade Agreement (NAFTA) member countries, the European Union, and the Contadora Group: Mexico, Colombia, Panama, and Venezuela due to its high inflation indices. The infamous neoliberal structural adjustment programs of the 1990s further tightened the screws on borrowing conditions to alleviate national debts by forcing these countries to make cuts to their social infrastructure. Taking advantage of the economic crises of the 1990s and the socioeconomic fallout from civil wars in the previous decade, these World Bank initiated programs caused these nations to sink into the vicious cycle of more debt.

As a result of all this, social problems worsened. Brought on by higher prices on basic food and commodity goods, increasing numbers of Central Americans and Mexicans sought economic survival elsewhere, mostly in the United States.

Once the harbinger of independence for Central America, Mexico has now become the gatekeeper between Central America and North America. While Mexican President Enrique Peña Nieto previously denounced former Texas Governor Rick Perry’s militarization of the U.S.-Mexican border as “unneighborly,” Mexico’s track record on how it treats its own southern neighbors is even more harsh. While it is estimated that 160 to 250 immigrants die crossing the U.S.-Mexican border per year, Mexico’s Border Network for Human Rights (RFDH) estimates that one to two immigrants coming from Central America die crossing Mexico, or about 700 per year. And this number does not include those arrested on the way. The Miguel Agustin Pro Juarez Center for Human Rights (PRODH) disclosed that at least 1,213 people from Central America were in Mexican prisons in 2013, many of them under dubious charges.

Meanwhile, Mexico has opened the floodgates for foreign capital even wider. The Peña Nieto administration has been characterized by a slew of neoliberal privatization measures, ranging from a union-unfriendly labor reform to privatizing its national energy resources. The radical transformation of Mexico’s hydrocarbon and electricity sectors as a result of the comprehensive energy reform signed into law on Aug. 11, 2014, means private investors can now feed at the trough of Petroleos Mexicanos.

The region’s continued emphasis on letting goods and capital flow freely while keeping the majority of their populations on lock is a sign that Mexico and Central America is still facing the challenge to fully realize their true economic and social independence from neoliberal de facto colonialism. This is the historical legacy that underlies the present-day cultural struggle for independence. Sept. 15 for many Central Americans and Mexicans around the world is a reminder of the challenges which lie ahead.

Many Central American countries, meanwhile, have myriad social and political problems. El Salvador’s leftist government struggles with a gang culture that engulfs 1 in 10 of its citizens and is infiltrating politics, while Guatemala and Honduras are struggling through mass unrest and all-consuming government corruption.