The media war against the democratically elected government of Venezuela kicked into high gear recently. 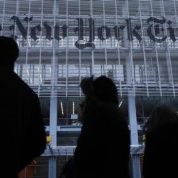 It is no coincidence that over the past few weeks a series of damning articles have come out touting the allegedly imminent collapse of the Venezuelan government.

These come on the heels of a recent editorial by the Washington Post that resorted to outright lies to justify its effort to promote regime change in Venezuela.

Meanwhile certain heads of government, such as Spain's Mariano Rajoy and Paraguay's Horacio Cartes who both have strong ties to Washington, have made provocative statements meant to try to isolate Venezuela in the international community.

There is stratagem afoot. Venezuela is passing through a difficult moment and the enemies of the Bolivarian Revolution smell blood.

Those old enough to remember the leadup to the 2003 U.S. invasion of Iraq know that these kinds of campaigns always predate foreign intervention.

For those quick to level the charge of conspiracy, one need only look to Brazil where analysts and pundits warned for months that the impeachment of Brazil was actually a Machiavellian coup plot to oust the president.

Many expressed doubt but the coup allegations turned out to be irrefutably true after a leaked conversation by one of the coup plotters spelled out the plan explicitly.

teleSUR takes a look at three of the worst examples of anti-Venezuelan propaganda masquerading as journalism.

Cohen's piece literally opens with the line, “Radical tourism is no different from sex tourism.”

He then equates those who seek to learn from the class struggle throughout the world with those who pay for sex in foreign countries.

Cohen then cherry picks information from questionable sources to disparage a government that has consistently won elections and always acknowledged the times they lost.

Cohen talks about Venezuela as if he lived there, when of course he hasn't. He seeks out Venezuelans like Thor Halvorssen who agree with him and back up his claims that the true champions of the oppressed are the right-wing politicians who ignored the poor for decades, before the arrival of Hugo Chavez in 1999.

But how much credibility can a man like Cohen—who backed the invasion of Iraq—have when he calls important thinkers such as Noam Chomsky and John Pilger “half-baked pseudo-left intellectual(s)”?

2. Venezuelans Long for Days of Elite Semi-Democracy... in the NY Times

The New York Times, which recently ran an editorial calling for a return of the days when Latin America was considered the “backyard” of the United States, is one of the loudest voices pushing for the ouster of Maduro.

It has featured article after article with one-sided stories that try to paint Venezuela as a failed state. It recently ran an op-ed by Emiliana Duarte, an upper-class Venezuelan living in Caracas, which claimed Venezuelans are going hungry.

Duarte writes for the notoriously anti-government Caracas Chronicles, which the Times describes simply as a website for Venezuelan news.

IN DEPTH:
Is There Hunger in Venezuela?

She seems nostalgic for the pre-Chavez Venezuela, saying the country was once “the most stable democracy in South America.” What she doesn't mention is that so-called stability came as a result of an elite pact between the leading political parties at the time, the Social Christians and Democratic Action.

This pact deliberately excluded leftist parties from having the opportunity to govern and led the elite semi-democracy known as the Fourth Republic. She laments the loss of the Fourth Republic's institutions, yet fails to recognize that the failure of these same institutions are partly responsible for the rise of the Bolivarian Revolution.

Duarte also talks about how she has to “fill a suitcase with bags of rice and other grains” whenever she travels, leaving out the fact that regular international air travel is a privilege reserved only for the wealthy.

The suggestion that runs throughout is that Venezuelans are suffering through a hunger crisis, when the facts suggest otherwise as Venezuela remains well above the FAO's minimum food security level.

The BBC's Wyre Davies dedicated an entire article downplaying the very real threat of a foreign military intervention in Venezuela, claiming it is nothing but a “specter.”

It wasn't that long ago that official U.S. policy was to install dictatorships throughout the region to do the bidding of elites. While Washington now talks about its respect for democracy, it backed recent coups in Haiti, Paraguay, Honduras and Brazil, not to mention the attempted 2002 coup to oust Hugo Chavez—in Venezuala, of course.

But Davies thinks a foreign intervention is a virtual impossibility.

Davies suggests the military exercises are just a cover “to divert attention from what is really happening.”

To back up his assertion, he points to nameless experts, not once but twice. First he says that “many commentators” agree with his claims without quoting a single one.

Then he says the “real reason” behind the exercises is “to create the emergency conditions that would enable the armed forces to deal with internal dissent.”

Once again he attributes the idea to “observers” but doesn't bother to name any.

Davies also asserts that President Maduro has “vowed to use (the Armed Forces) against opposition protesters.”

This is patently false. Maduro has never said such a thing.

In fact, opposition leader Henrique Capriles is the only one making open calls to the military to act against the people and rebel against Maduro.

Beyond that, the Venezuelan people and their Armed Forces have a special relationship. It was the military that rescued Venezuelan democracy after the short-lived, U.S.-sanctioned coup briefly ousted President Chavez from power in 2002 in the kind of foreign intervention Davies thinks is a mere specter.