After the Paris attacks of Nov. 13, French President Francois Hollande didn’t flinch before looking east to Syria. Terrorism, he said, must be demolished there. 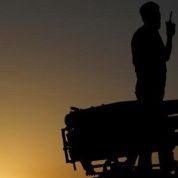 In highlighting the east, though, Hollande is distracting spectators from its more relevant history, intervention and interests south: in Tunisia. The former French colony, still intimately enlaced with the superpower’s legacy, sends more foreign fighters to Syria than any other country. It may be no wonder.

“Hollande has always been a political loser posing as a warrior,” Soufiane Ben Farhat, Tunisia’s biggest pundit on France and columnist at La Presse, told teleSUR. To him, Hollande is cowering from a mess — unprecedented radicalization in Tunisia — that’s long past being easily repairable. Tunisians are quick to spot France’s hypocrisy in Syria because they are used to it at home.

One Hand but Not the Other

With only the Mediterranean separating the two countries, they are “doomed to live together,” said Ben Farhat. Thousands of years of commercial, military and cultural relations have created more francophones in north and West Africa than in France. The exchange was never balanced, though, France only treating Tunisia as a periphery.

Since Tunisian independence, French attitudes toward Tunisia have at best been paternalistic, and at worst, reactionary. As strong commercial ties chugged along quietly — France is still Tunisia’s biggest partner — the embassy pointed a finger whenever it was unhappy with the politics of its former colony.

“Their foreign policy has always been to promote the Bastille abroad that they overthrew at home,” said Ben Farhat.

These politics became clear when young Tunisians won the first win in the Arab Spring, ousting the long-serving President Zine El Abidine Ben Ali. Previously uninterested with French involvement — a topic that seemed more relevant to their grandparents — the politicized generation began adding French politics to its list of grievances.

Scandals piled on. During the uprising, French Foreign Minister Michele Alliot-Marie, was caught vacationing in Tunisia, meeting with and buying real estate from a businessman close to Bel Ali. Hours before the president fled, French ambassador Pierre Menat sent a wire that Ben Ali was in control against the protesting “troublemakers.” It was also leaked that France sold Tunisia tear gas and other instruments of police repression up until at least two days before Ben Ali fled. Soon enough, protesters were rallying in front of the French embassy.

When teleSUR asked Lina ben Mhenni, a major voice in the revolution, for an interview on French-Tunisian politics, she declined. So did Adel Fekih, the Tunisian ambassador to France at the time and former spokesperson of the socialist Ettakatol party.

Back in Europe, politicians and media painted the activists as Islamists — though the largely educated, largely female, largely leftist crowds initially called for jobs, labor rights and an end to the corruption and clientelism of the old regime. Some even mounted critiques against economic liberalization, a project that the European Union pushed through asymmetrical tariff treaties.

“Tunisians are ‘Che Guevarists’ in the sense that they are patriots and refuse subservience to others and the economic and military domination of foreign powers,” said Ben Farhat.

Post-revolution, France stepped up its judgment. The Islamists were no longer supposedly the protesters, but instead, actually those in power — and this time, backed even more by the French left than the right. Many party members of the Islamist Ennahda, which gained more votes for its economic liberalism than its religious agenda, had returned from exile in France after the revolution. Though the leftist coalition the Popular Front received support from France (“Our relationship with France is not yet stable,” said its leader, Hamma Hammami), two others — the Congress for the Republic, known as the CPR, and Ettakatol — who won zero to minimal seats did: a foreign policy seen through what Ben Farhat called a “backwards, distorted prism.”

Helping us Harm Ourselves

France alone is not responsible for growing terrorist networks in Tunisia. Studies of foreign fighters profile them mostly as young, uneducated men from poor urban areas. Islamic fundamentalists, granted amnesty after the revolution, were able to recruit quickly because of high unemployment rates and effectively because of close relations with certain politicians. Tunisians neglected by government policy were also bait for Libyan extremists, whose consistent infiltration into its neighbor recently caused Tunisia to start building a wall along part of the border. According to the Egyptian El-Shorouk newspaper, Qataris also paid Tunisian non-profits to send fighters to Syria.

“For many of these young men, death in Syria is a lot better option than staying here and going to prison, and being tortured and harassed,” Marwen Jedda, a lawyer with many Islamist clients, told the Washington Post. The number of Muslim victims of attacks by radical groups also far outnumbers the number of French and European victims.

While fundamentalists are not all motivated by anti-colonial or anti-imperialist sentiments, attacks like the one at Sousse resort last summer — where the gunman reportedly ordered locals to clear the way so he could only target French and British tourists — reveal that the analysis is not irrelevant.

As ‘Guevarists,’ Tunisians are nervous about NATO’s wide open access in anti-terrorism operations like surveillance and even drone piloting. NATO lost much credibility in their eyes after its intervention in Libya, for which France takes most of the blame (Hillary Clinton’s emails confirmed that French secret service organized rebels and killed Moammar Gadhafi on then-president Nicolas Sarkozy’s orders). Tunisians closely followed France’s role, since the ensuing civil war in Libya expanded into Islamist networks at home.

IN DEPTH:
Islamophobia 1 Year on from Charlie Hebdo

The staunchly pro-Palestine country also keeps a close eye on friendly relations between France and Israel, which secured the place of the former in wider Middle East geopolitics. When Hollande began arming Syrian rebels while claiming to scale up the “war on terrorism,” Tunisians scoffed.

Following successive attacks — one of which happened the same day as the famed November Paris attacks — the Tunisian government invoked stark security measures, including multiple states of emergency and general repression, arguably fueling more radicalization. It’s no secret that they took hints from French security policy, whose own states of emergency were consistently declared in response to anti-colonial uprisings: in April, President Beji Caid Essebsi visited Paris to ask for more security and defense cooperation. France already invested so much anti-terrorism resources in Tunisia that it provided the anti-terrorism master, the United States, with intelligence.

Even where France managed to keep a low profile, Tunisians developed their theories. Tunisia, though small, houses oil and phosphate fields whose ownership is still hidden from the public. Protests last year calling for transparency and nationalization were notably not just because they suspected the interests of French multinationals, but also because those regions face historical neglect and socio-economic disparity. Ben Farhat denied that France has its hands in the fields, but admitted that suspicion among Tunisians is strong enough to be exploited by politicians.

Latest figures suggest that about 3,000 Tunisians are fighting in Tunisia, and another 6,000 were stopped at the Tunisian border. The estimate dates from 2014. Since then, Tunisia saw four attacks: one on a museum, one on a beach resort, one on a shepherd and one on a bus — though only the one against tourists was widely reported. France saw two attacks, in which Tunisians were also killed. To Hollande, the threat — and the solution — laid in Syria. To Tunisia, France may seem like a more relevant culprit.