61 years from Sunday, 29 “non-aligned” nations from Africa, the Middle East and Asia closed up the Bandung Conference, a landmark event on anti-imperialism, anti-racism, anti-colonialism and anti-militarization in the midst of an escalating Cold War. 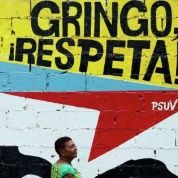 On World Anti-Colonialism Day, teleSUR looks at exemplary achievements in decolonization from the other side of the world, Latin America, that continue to inspire its Afro-Asian allies.

Colonization is mostly talked about in the past tense, but for some Latin American islands, the issue is still a reality. Struggles to fight off continuing claims by the United States and the United Kingdom have been bloody, but the underdog islands have still not backed down with their demands for sovereignty.

Puerto Rico has been occupied by the United States since the U.S. war with Spain in 1898. Since then, the U.S. Congress has exercised sovereignty over the island nation. Puerto Ricans are U.S. citizens but the island's residents have no voice or vote in Congress and cannot vote in presidential elections.

The Puerto Rico Nationalist Party called for independence since the first half of the 20th century, leading the opposition against the U.S. occupation. The Puerto Rican government — then headed by U.S. governors appointed by the president of the United States — responded to the party's actions with repression, culminating in the Rio Piedras and Ponce massacres, in 1935 and 1937 respectively.

In response, members of the Nationalist Party turned to armed struggle, and the U.S. continued its campaign to repress and exterminate the independence movement.

Demands for sovereignty continue today, especially in light of the Puerto Rican debt crisis, which is often compared to the Greek crisis.

The Boricua Popular Army — better known as EPB-Macheteros — leads the fight, criticizing moves to urging the U.S. Congress to make Puerto Rico the 51st state in a bid to save the island from default. The rebels argue those who advocate to remain a Free Associated State of the United States — Puerto Rico's status since 1952 — are allied with “colonialism.”

Known to the British as the Falklands, the Malvinas Islands have been held by the U.K. since 1833, when British warships seized the archipelago. Argentina has long disputed British claims to the islands.

In 1982, tensions boiled over into a short war that claimed close to 900 lives, and ended with the U.K. holding on to the islands. Since the war, both Argentina and the U.K. have been called on by the United Nations to reach a negotiated solution to the tense dispute.

While Argentina has backed U.N. talks on the islands, the U.K. has opposed international negotiations.

Five Latin American regional bodies, the African Union, the G77 and summits with Africa and the Arab world have all expressed support for Argentina.

When the new Argentine President Mauricio Macri met with U.K. Prime Minister David Cameron, however, he did not resist Cameron’s insistence on keeping his claim over the islands.

The Malvinas remain the largest military base in the southern hemisphere and the most militarized area in the world, with 2,000 NATO troops to its 3,000 inhabitants.

The islands are also rich in natural resources, including oil, which the U.K. has illegally granted licenses to exploit.

2. Pushing Out the U.S. Military

The United States has an arsenal of new strategies for interfering in the politics of its southern neighbors. Among its favorite is its continual deployment of troops and funding of military operations in bases scattered around the continent, in the name of fighting drugs and terrorism.

Although Latin America hosts less than a tenth of U.S. bases worldwide, its voice has been among the loudest in demanding they leave.

U.S. control of the isolated bay dates back to the 1903 Cuban-American Treaty – inked five years after the United States intervened to overthrow Spanish rule of Cuba. The Cuban government has long maintained the United States strong armed the then newly-independent Cuba into handing over the bay with the threat of force, meaning the century old treaty is illegal.

International norms generally prohibit the threat of force and violations of self-determination.
Guantanamo Bay prison opened in 2002, as an aftermath of the Patriot Act, and former U.S. President George W. Bush’s response to the 9/11 terror attacks. The U.S. uses the center to imprison untried non-U.S citizens, potentially indefinitely, who are alleged terror suspects of, though many have found to not be.

The Castros have repeatedly demanded that the United States hand back the land. Although U.S. President Barack Obama promised he would close the base and restored diplomatic relations with the island, Guantanamo still remains.

“The restoration of diplomatic relations is the beginning of a process toward the normalization of bilateral relations, but this will not be possible if a blockade still exists, if the territory of Guantanamo, illegally occupied by the U.S. Navy, isn’t returned, if the radio and TV broadcasts, violating international norms, do not cease, and if our people are not fairly compensated for the human and economic damage they have endured,” said Cuban President Raul Castro.

Other Latin American nations have echoed the call; notably Uruguay, which granted asylum to six former inmates. They are currently employed in the left-wing nation and continue pressuring the United States to close the base for good.

In September 2009, Ecuador formally resumed control of the Manta military base, 10 years after it was leased rent free to the U.S. military as part of Plan Colombia, a U.S. operation against left-wing insurgents in Colombia.

The decision to not renew the lease was applauded by most social organizations, who also advocated for wording in the country’s new constitution which would bar foreign armed forces from taking up presence in the country.

The Ecuadorean government also canceled a cooperation fund through which the U.S. government financed some Police expenditures, including salaries. After doing so, President Correa expelled Armando Astorga, an attache in the U.S. Embassy in Quito, who criticized the government's decision.

UNASUR has also repeated calls for the U.S. to remove all of its Latin American bases. News that U.S. soldiers and military contractors sexually abused dozens of children in Colombia has only further aggravated their welcome.

Plan Colombia, however, remains strong in Ecuador’s northern neighbor. Washington has allegedly spent more than US$8 billion in military aid, three-quarters of which has gone toward funding the military and local police and their operations, which have led to devastating numbers of deaths and forced disappearances.

The guerrilla group FARC, now in peace talks with the Colombian government, has proposed that U.S. military aid to Colombia be allocated to a peace-building fund.

Regional integration began as an anti-colonial fight with Simon Bolivar, and regional bodies remain one of the most powerful ways of countering outside threats and strengthening domestic peace and development.

The continent has several regional bodies, but UNASUR and ALBA were specifically created to promote regional development and provide a counterbalance for a multipolar world, modeled off of the European Union.

The bloc’s objective “is to construct a space for cultural, economic, social and political integration, respecting the reality of each nation” — especially focusing on eradicating social and economic inequality, attaining social inclusion, increasing citizen participation and strengthening democracy.

It has a combined population of 400 million people and an economy of over US$4 trillion.

The late Hugo Chavez, one of the main founders of the body, said one of their first goals was a South American Energy Treaty to guarantee all the countries of South America energy, oil, gas and petrochemical products.

The Bolivarian Alliance for the Peoples of America, or ALBA — another project of Chavez and other left-wing leaders — is an intergovernmental organization based on the solidarity of Latin American and Caribbean nations.

The ALBA countries defend themselves by promoting regional integration based on solidarity and cooperation, setting aside, so far as they can, differences in political ideology with other regional governments.

own nations and allies like China or Russia. The aim is to redistribute wealth and fund areas previously starved of investment, such as food production, small and medium sized businesses and infrastructure of all kinds.

Latin America has an aptitude for things decolonial, especially when organized in permanent bodies.

Bolivia has been the leading state in both study and application, hosting conferences like the Anti-imperialist and Anti-Colonial Summit of the People of Latin America in 2013 and the counter-hegemonic World Summit of the Peoples on Climate Change and the Rights of the Mother Earth in 2015 to counter the Copenhagen conference.

“It’s not sufficient to go somewhere and say, ‘I declare you decolonized!’ and that’s it, they’re decolonized. No,” said the Vice Minister Felix Cardenas to teleSUR in an interview. “It’s a question of changing mentality, behavior, of life philosophy, and to do this at an individual level, or at a communitarian level, a national level, we have an obligation to first ask ‘what is Bolivia?’ If we don’t clearly understand what Bolivia is, then we don’t know what needs to be done.”

The United Nations Special Committee on Decolonization, or C-24, has also been largely involved in Latin America, with Ecuador hosting the committee twice and Nicaragua hosting the Pacific regional seminar this year.

The Special Committee, established at the height of the anti-colonial struggle in 1961, is mandated to monitor implementation of the declaration on decolonization in the body’s 29 member nations. Among those, six are Latin American and five Caribbean: Bolivia, Chile, Cuba, Ecuador, Nicaragua, and Venezuela; and Antigua and Barbuda, Saint Lucia, Saint Vincent and the Grenadines, Saint Kitts and Nevis and Grenada.