On the eve of July 15, thousands of French people celebrated Les Bleus' victory against Croatia at Russia's World Cup, on the Champs Elysees. However, not all the French are able to join the festivities, since all bus and subway routes from Paris to the suburbs were shut down early in the evening, officially over “security reasons.” 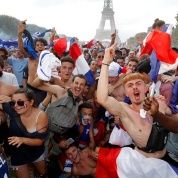 Out of the 23 members of the 2018 World Cup's French team, 19 are sons of generations of immigrants living in such suburbs, where discrimination usually affects local residents beyond mere transportation. Only three days after Les Bleus qualified for the quarterfinals against Argentina, an unarmed Black man, 22-year-old Aboubakar Fofana, was shot dead by a White police officer in the western city of Nantes, causing riots for several days.

No matter how Black and Brown their players look — the team was even worldwide nicknamed “the sixth African team”— France almost unilaterally celebrated their victory, including Marine Le Pen, the leader of the outspoken anti-immigration far-right party National Front.

How is this momentum of apparent national unity much different from the time Les Bleus won the 1998 World Cup? A few years before Marine Le Pen's father, hard-liner Jean-Marie, made it to the presidential elections' run-off vote.

With the 1998 victory, the French suddenly realized how ethnically diverse their country was, finally seeing positive images of Black and Brown French citizens on TV — unlike the delinquents usually portrayed by the mainstream media or the political elites. The staggering discovery resulted in making up a new myth and a new phrase, “Black-Blanc-Beur,” to define a radically diverse country.

Still, the phrase would maintain the normative “blanc” (word unchanged), while preferring the English word “Black” instead of “Noir” and the colloquial word “Beur” for “Arab” — an early sign that the French remained uncomfortable with the diversity myth, according to historian Pascal Blanchard in the documentary “Les Bleus, une autre histoire de France.”

In 1998, there was only one player with Arab origins in the team (Zinedine Zidane) and two with African ancestry, Patrick Viera, who both grew up in French marginalized suburbs, and Marcel Dessailly born abroad, in Ghana. Yet it marked a significant shift in the composition of the French team, symbolizing the return of players with immigration-origins since the France-Algeria war ended in 1962.

Before 1998, Zidane was the target of criticisms over the defeat against the Czech Republic, in a heated moment of French politics — debating undocumented citizens and delinquent youth living in the suburbs. But after the 1998 victory, even Jean-Marie Le Pen kept his criticisms against players who would not “properly” sing the Marseillaise low-key.

For the anecdote, Zidane took a stand for the very unique time of his career when Le Pen passed the presidential elections' first round, encouraging the French to vote against a party that he considered did “not represent French values.” He then refused to pronounce Le Pen's name, saying “the other one” instead. As for Le Pen, after the 1998 victory, he started referring to Zidane as the “gifted child of French Algeria” — a way of highlighting the “positive legacy” of French colonialism while denying Zidane full French citizenship.

Consecrating their leadership with the 2000 Euro Cup, Les Bleus became the ubiquitous face of a happily diverse France, solicited to participate as much in TV advertisements as in diplomatic meetings.

However, the gap with reality soon became visible during a friendly match against Algeria in October 2001, when dozens of supporters interrupted the end of the game by invading the field as a way to express the complexities of their French identity.

But the gesture was perceived otherwise in conservative France, for whom the memory of the French-Algerian war was still vivid, and heavily condemned by Lilian Thuram for other reasons. The game also occurred only one month after 9/11, and was interpreted as evidence that the suburban youth would never properly behave as French citizens.

Such incidents would repeat themselves against Morocco in 2007 and Tunisia in 2008, each time further opening the wounds of France's colonial past.

ANALYSIS:
What Makes France the Perfect Target in the IS Group's Strategy

The divisions become blatant when the national team is defeated in international championships: when France lost the 2006 World Cup against Italy over Zidane's headbutt, the first impulse was to stigmatize the suburban youth, as Zidane grew up in the northern suburbs of Marseille. But that was quickly replaced with empathy for the 1998 national hero: politicians from all parties would easily admit that if someone would have insulted their sister (as Zidane claimed his was), they would have reacted the same way.

Similarly to the undocumented Malian citizen who was recently offered the French nationality for saving a French baby from an almost certain death, Zidane was considered exceptional enough to deserve absolution.

The désamour between the French and their soccer team concretized during the 2010 South African World Cup and the “Knysna gate”, when the players started a strike against management, refusing to train and protesting the decision to suspend player Nicolas Anelka, who had allegedly insulted the coach Raymond Domenech.

Returning home, Anelka was suspended for 18 games, Patrice Evra five, and Franck Ribery — whose conversion to Islam was always heavily evoked in the media — three, while Jeremy Toulalan, a white French from the north-western region of Brittany who eventually confessed having written the letter formalizing the strike, was suspended for only one game.

Domenech eventually confessed, in an interview, that Anelka never insulted him the way the media reported at the time; but the public opinion would systematically over-interpret every sign proving that these kids represented the failure of a diverse France — from how enthusiastically they would sing the Marseillaise, to the ominous headphones they would be wearing outside the team's bus. Michel Platini even attempted, in vain, to defuse the tensions by admitting that he never sang the Marseillaise out loud before a game, because he found the lyrics too violent.

Today another generation of players brought back the World Cup home, yet they will remain under close scrutiny over any faux-pas that could confirm the lingering suspicion they will never be “French enough,” like openly-Muslim player Paul Pogba, who can hope for a momentaneous rest from critiques since he scored the third goal against Croatia today.

French President Emmanuel Macron could be seen, in front of the cameras, heaping praises on every single Bleu this will not erase the fact that France recently abstained from giving a helping hand to hundreds of starving asylum-seekers stranded at sea when Italy's far-right government denied them the access to their ports.

Meanwhile, Les Bleus can be whatever color French society wishes them to be, but nothing will erase the stain of not being French enough.