​While Latin America's efforts to strengthen food security and reduce hunger have been widely praised, land conflicts endure as a result of the growing presence and pressure of the corporate-dominated, industrialized, agrochemical-intensive agricultural model; and yet, implementing policies guaranteeing food security has not necessarily meant they were favoring a smale-scale sustainable model of agriculture. 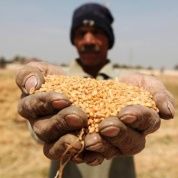 Will peasants (including landless laborers, small farmers and petty commodity processors) be able to organize quickly enough to win this battle before it is too late, when the effects of climate change will affect everyone? Do the power relations favor the movements fighting for a sustainable, small-scale, subsistence type of agriculture, when the challenge of climate change is more threatening than ever?

A favorable context? The election of left governments and the shift of perspective of FAO

The current relation of power between the two models (traditionally referred to as “latifundio” and “minifundio”) seemed to have recently changed in the favor of the latter – small-scale farming. First, many left-wing parties elected during the 2000s in the region, have been more responsive to the long-standing requests of the social movements they were supported by. For instance, legislation guaranteeing food security has been passed in Venezuela, Bolivia, Ecuador, Nicaragua and the Dominican Republic.

On the other hand, the growing concerns over the global effects of climate change, as well as the increasing health issues surrounding industrialized agriculture and food, forced international organizations to gradually change their conceptual frameworks, and to be more inclined to support the first model. In 2008, over 400 scientists appointed by the U.N. contributed to the International Assessment of Agricultural Knowledge (IAASTD), rejecting the “green revolution” model supported so far – the use of technologies like genetically engineered crops being aggressively promoted by Monsanto and other agricultural biotech giants – instead advising decentralized, ecologically sound and democratically controlled food systems.

In that context, peasants' movements have indeed known an unprecedented surge in growth since the beginning of the 1990s, observed Freddy Ordoñez from the Colombian-based ILSA (the Latin American Institute for Society and Alternative Laws), like the Via Campesina movement (LVC), proving that the (yet diverse) sector of peasantry can act as a “potent force for transformation,” just as much as the workers in previous centuries, added Tanya Kerssen from the U.S.-based Food First.

The U.N.'s Food and Agriculture Organization (FAO) even called 2014 the International Year of Family Farming, “a tremendous symbolic coup for the world’s peasants and farmers,” said Kerssen, recalling that this shift nevertheless followed an intense mobilization by peasants.

The pressing issues related to climate change have also recently been an incentive for world leaders to implement policies favoring a sustainable and familial type of farming – increasingly portrayed as a viable solution to these issues, observed Ordoñez .

Unfortunately, this “symbolic coup” has not necessarily meant an overall improvement for the sector, the experts explained to  teleSUR, as the discursive shift adopted by part of national and world leaders has not necessarily been accompanied by concrete changes.

“This message [the FAO naming 2014 the International Year of Familial Farming] has not helped to unveil the difficult economic situation of the rural majorities of peasants and indigenous farmers, who are rather displaced and marginalized from the food market and agricultural policies,” said Gonzalo Colque from the Fundacion Tierra in Bolivia. “Under the name of familial agriculture, was given the same treatment to subsistence peasants, agroecological producers, medium-sized producers and capitalist farmers that produce commodities (soy for instance).”

When the state or the private sector have started to coopt the terms of well-being (Buen Vivir) or mother earth (Madre Tierra), it helps to create a distinct imaginary, added Colque; however these concepts are also used to cover up the true economic processes that undermine those ideals.

The Pressure of Agribusiness' Interests

The forces supporting industrialized agriculture soon mobilized to adapt to the new “climate change” framework that was threatening their business. They lobbied the FAO, which came up with the concept of Climate Smart Agriculture (CSA), which was officially presented at the 2010 Climate Change Conference. Peasants' organizations denounced the move as a disguised way for the same corporate organizations to keep their monopole over agriculture yet hardly changing their socially and environmentally unreasonable practices.

Other factors have contributed to empower the promoters of an industrialized and export model of agriculture. The 2008 economic crisis, for instance, had as a consequence “the transfer of a good part of financial investments to the farming sector,” said  Ordoñez, “promoting food commodities as one of the main destinations of the international financial capital.” The phenomenon of “land grabbing” also started emerging in developing countries, including in Latin America, for  purposes of food exportation, he added.

As for the peasant sector, “in recent years chemical inputs have become so cheap and widely available that they’ve become accessible even to relatively poor peasants” – traditionally reluctant to go into debt, explained Kerssen. “In Bolivia, for instance, tariffs (import taxes) on agro-chemicals have been reduced to zero in the last 10 years. So in the short term, the cost-benefit ratio of using chemical fertilizers versus using animal manure or compost has leaned heavily in favour of the former — especially where family farm labor is scarce due to factors like out-migration.”

In addition, stories of successful farmers using such inputs are spread by the agrarian power in a bid to promote such a model, while the long-terms negative effects (socially and environmentally) are only starting to become visible, said Colque, like land dispossession, commercialization of small properties, indebtedness, and dependence on seeds and agro-chemicals controlled by transnational firms.

In Colombia however, the peasants' movement seem to unanimously reject this model, including the use of GMOs, as confirmed their unprecedented mobilizations over the past decade. For instance, Ordoñez highlighted, during the country’s 2013 national strike the government failed to satisfy the peasants’ demands by reducing the costs of agrochemicals and other industrial inputs.

A more powerful force is at play than the actors of the farming sector themselves: climate change, which effects have become more threatening than ever. While small peasants are already and will continue being the first victims of climate change effects, more and more voices argue that agroecological farming based on traditional peasant knowledge remains our only and last chance to save the planet before it is too late.

Some estimates place industrialized agriculture’s contributions to climate change at upwards of 57 percent—if you include things like deforestation, recalled Kerssen. According to a recent World Bank report called “Turn Down the Heat,” Latin American countries will be confronted to 20 percent more droughts, 80 percent more tropical hurricanes and an almost complete disappearance of Andean glaciers. While Bolivia and Peru host 77 percent of the world glaciers, “There is a craze in the Andean countries right now to build large hydroelectric dams, many of which are to irrigate and power industrial agriculture, or to provide water and energy to ballooning cities that are full of displaced peasants,” explained Kerssen.

For example, she continued, Brazil is pressuring countries like Bolivia, Peru and Ecuador to build dams and export the energy to Brazil - one of the most polluting types of mega-projects, allegedly producing even more greenhouse gas (methane) than coal, while destroying lands and rivers, usually in indigenous territories. Over new 500 mega-dams are planned in these countries.

In this sense, protecting the small-scale farming in the region is essential not only for the millions of people working in this sector (representing almost 30 percent of the Latin American population, according to the World Bank estimate for 2008-2011). Because Latin America is one of the most ecologically diverse regions of the world, promoting such a model is essential to preserve the global ecosystem as well.

In the words of the Via Campesina, “The farming systems of production supported by agroecology can cool down the planet.”