August 30 marks the International Day of Enforced Disappearances. The day was inaugurated to commemorate all of the victims of forced disappearances and was created following a U.N. Resolution approved in 2010. 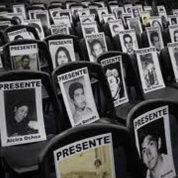 The term enforced disappearances refers to victims forcefully abducted as a strategy to intimidate and spread fear throughout a population. Although most of the victims are actually killed, others were tortured or smuggled to another country, making it very difficult to determine their whereabouts. Some reported as disappeared might never be found and their bodies never recovered.

The proposal for commemorating the day of enforced disappearances was brought forward by the Latin American Federation of the Detained-Disappeared, a regional organization which unites all of the human rights bodies struggling to find out the truth.

In Latin America, Tens of Thousands Were Disappeared

The forced disappearances of people became an issue of global concern during the right-wing military dictatorships which governed most of Latin America throughout the 1970s and 1980s. All of them resorted to this technique as a means of limiting opposition to their regimes.

Without dead bodies, these governments could deny knowledge of people's whereabouts and any accusations that they had been killed. As Argentinian Dictator General Jorge Rafael Videla explained in an infamous press conference, "They are neither dead nor alive, they are disappeared"

Across the continent, government military forces targeted hundreds of thousands of people. Many were taken to clandestine prisons and submitted to torture and – if lucky – released afterward.

Tens of thousands did not survive the torture techniques.

After the Argentinian military dictatorship ended, investigations concluded that around 30,000 people were forcefully disappeared. Human rights organizations such as Grandmothers of Plaza de Mayo began as groups of women relatives looking for their missing loved ones. Through their work, they began discovering that the police, the military and government officials were deliberately misleading them in a cover up.

They found out that children of the disappeared were also being abducted and sold or given to different members of the political and military elite, which for different reasons did not or could not have their own children.

The search for their grandchildren and their disappeared relatives continues today with some recent successes, such as the recent discovery of Guido Montoya Carlotto and Ana Libertad, making it 115 grandchildren that the campaign has re-united with their biological families.

Elsewhere, the Chilean dictatorship led by Augusto Pinochet disappeared, arrested and tortured between 40,000 and 60,000 people, making it one of the most brutal regimes in the region. An estimated 3,200 were disappeared.

The Truth Commission into El Salvador's civil war reported that more than 8,000 people were victims of enforced disappearance.

Whilst the Brazilian dictatorship forcefully disappeared around 500 people according to current official figures with the actual numbers thought to be higher. Torture was much more widespread, including amongst its victims current president Dilma Rousseff, and famous Brazilian cinematographer Lucia Murat.

US Backing Through Operation Condor

Most of the military dictatorships were involved in what was later revealed to be a plan of systematic extermination, named Plan Condor. Through this the dictatorships of Bolivia, Argentina, Uruguay, Brazil, Chile and Paraguay coordinated their efforts to hunt down left-wing dissidents.

As J. Patrice McSherry, Professor at Long Island University and author of the book Predatory States, shows the dictatorships coordinated their actions through a highly sophisticated network – which included a shared database of targeted foes – provided by the United States.

The difficulties of finding out the truth about their relatives which had disappeared became an arduous job for regional human rights organizations, which had to tackle both amnesty laws granted to the military, after the end of the dictatorships, as well as the restrictions, due to “secret” statuses given to the the files documenting the atrocities.

Despite the crimes carried out in those fatal decades in the history of Latin America, enforced disappearances continue, even if the actors involved and the ways in which they occur has changed.

7th Anniversary of the Disappearance of Haitian Human Rights Leader

A new factor in enforced disappearances is linked to drug traffickers. Mexico and Colombia are two countries facing growing concerns over the number of disappeared people.

Whether these people are being disappeared by government forces or local drug lords is uncertain.

But one of the most recent and troubling examples of disappearances is the case of the False-Positives, in Colombia. Under President Uribe's government – where the number of disappeared increased notably – the military heads instructed soldiers to recruit young unemployed males from rural areas, which would then be assassinated and presented as guerrilla fighters.

Areas controlled by drug cartels are also witnessing the disappearance of people. In Mexico, increasing number of cases and the inability of the government to bring justice to these families have caused widespread criticism from human rights organizations against the Mexican State.

As we mark the International Day of Enforced Disappearances, though the problem of enforced disappearances is not limited to Latin America, the region has become a beacon in the world in which the fight for justice against this crime continues.