Today on International Anti-Corruption Day, teleSUR takes a look at two right-wing presidents in Latin America and their long history of corruption allegations and proven cases against them. 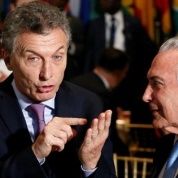 First, Argentina’s president Mauricio Macri, who came to power only one year ago and has destroyed all the social achievements from the past two leftists administrations. Then, Brazil's president Michel Temer, who came to power after promoting an illegal parliamentary coup against democratically-elected President Dilma Rousseff.

Both have promoted austerity measures and directly attacked the poor, on top of facing investigations on bribes, corruption, and even cover-ups.

Macri, in the heart of the Panama Papers

Argentine President Mauricio Macri was the main figure involved in this year's Panama Papers scandal, after a leak from a company revealed how world leaders had thousands of offshore companies in tax havens to, among other fraudulent activities, avoid paying taxes.

Twenty-nine offshore companies located in the Bahamas and Panama are related to the president, his family, and close business partners. By Argentine law, these types of companies are illegal.

At least eight of these companies operating in offshore tax havens were founded and run by friends and relatives of the president, with some of the firms having been set up with the help of Mossack Fonseca, the law firm at the center of the Panama Papers leak.

Reports confirm suspicions that the Macri family would name employees as directors of companies in order to avoid having to list themselves as directors.

The spotlight fell on Macri after it was revealed that he was once listed as a director and vice president of Fleg Trading, a company in the Bahamas, after the president claimed it was set up for a venture that ultimately never engaged in any business and according to him was dissolved in 2009. An investigation later found that the company did engage in commerce and invested millions of dollars in Brazil.

Most of these firms are still active today according to an investigation, while at least one of them was founded just last year.

According to Argentine’s Attorney General Gabriela Boquin in an official document, "offshore corporations are real tools for illicit activities. Society is deceived through its taxes, third-party creditors, or its use for laundering money whose origins are unknown or impossible to declare because of its illegality, either because it was not fiscally declared or because it came from corruption, drug trafficking, arms trafficking or terrorism."

For 2015, Macri declared his fortune as being worth US$110 million to Argentina's Anti-Corruption Office, an increase of 100 percent from the US$52 million he reported for the 2014 fiscal year. Following the Panama Papers leak, Macri admitted to having over US$18 million in tax havens.

To top it all off, Macri’s government proposed a tax amnesty bill, promoted it and managed to see it approved in congress. This controversial law aimed to shield tax evaders who have undeclared holdings and assets and to offer them lower taxes in Argentina in order for them to bring assets to the country.

An investigation into the scandal revealed a company based in Uruguay, in which the president’s father Francesco Macri, along with other top executives were processed for smuggling and tax evasion.

At Macri’s request, the law excluded from legal responsibilities any relatives of officials who have engaged in money laundering or have undeclared assets abroad, a clear wink at his own father and siblings.

So far, the massive investigation on the largest corruption scandal in Brazil, involving inflated contracts inside the state-run oil company Petrobras had not involved President Michel Temer. Until now.

Temer, who was not elected as president, but appointed by the senate after a parliamentary coup, was accused by several key informants in the police investigation known as Car Wash.

According to investigations by Veja magazine, Temer has asked for millions in financial support from businessman Marcelo Odebrecht, owner of the largest construction conglomerate in the country, in exchange for political favors.

Odebrecht is currently in prison serving a 20-year sentence for his involvement in the bribery network in Petrobras, in which he and his directors paid politicians from different parties in exchange for exaggerated contracts with the oil company.

In 2014 Odebrecht said he had paid more than US$3 million to the Brazilian Democratic Movement Party after Temer, who was vice president of Brazil at that time and head of the party, requested the money.

The businessman and 50 of his executives reached a deal with investigators to give details on the illegal transactions that had taken place, as well as give the names of the politicians who participated, in exchange for lighter sentences.

Former general manager of Petrobras Nestor Cervero also alleged Temer had demanded US$700,000 monthly for the PMDB under threat that he could lose his job. According to Cervero, the payoff included giving Senator Renan Calheiros the indicted head of the Senate a sum of US$4 million.

The former state’s attorney in Brazil, Fabio Medina Osorio, later alleged that Temer had fired him as an attempt to meddle with the Petrobras investigation.

At least seven ministers inside Temer’s government have been directly involved in the investigations, and three of them resigned their positions. In total, 60 percent of the 594 congress members are currently under investigation for corruption inside the Petrobras scandal.

It is thus not surprising that the senate will discuss in the coming days a law that will curb the authority of prosecutors and judges involved in corruption investigations, a move widely criticized as a strategy to shield politicians from graft charges.

The bill could result in jail time for judges and attorneys who accuse public sector authorities "in a fearful way," which is being seen by analysts as an attempt to stop the Petrobras investigation.