For a relatively small nation, in terms of size, population and economics, Ecuador has been a major player in contemporary Latin American politics, particularly on the Left. 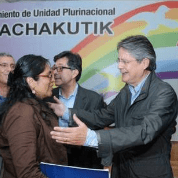 The experience of toppled governments by popular uprisings, led by Indigenous organizations with radical, left-oriented politics, have contributed to a regional shift that ushered in the Bolivarian Revolution in Venezuela and later, the election of Evo Morales’ Movement Toward Socialism in Bolivia.

In Ecuador itself, popular movements culminated in the election of Lucio Gutierrez (who subsequently betrayed his own leftist mandate only to be overthrown himself) and in 2006, to the election of Rafael Correa, a progressive economist who gained local fame during his brief tenure as Minister of Finance. In addition to chastising former U.S. President George W. Bush, Correa became popular with Ecuadoreans but angered the International Monetary Fund and World Bank by increasing health and education budgets, while decreasing interest rates on government bonds.

When the World Bank canceled Ecuador’s loan and Correa was forced to resign, he did so while polling as the most trusted politician in the country.

Eight years into Correa’s government – which his supporters calls the Citizen’s Revolution – he retains high popularity and the country has one of the most stable economies in the region. Moreover, Ecuador has become an arguably more just and democratic country, with 1.1 million people lifted out of poverty, election participation exceeding 80 percent and countless means of citizen participation that previously did not exist.

Yet, there is an opposition movement that is claiming that the country is not on the right – or left – path.

In August, on the heels of protest organized by right-wing leaders against proposed increases to inheritance and capital gains taxes, leaders from movements of some of the country’s historically leftist movements – including the once powerful Conaie Indigenous movement – called for national actions against Correa.

While the Aug. 13 date for the People’s Strike and Indigenous Uprising has come and gone, actions continue, with leaders of opposition organizations refusing calls for dialogue and promising an ‘escalation’, including a general strike.

From outside, Ecuador is now a paradox where organizations callings themselves leftist are mobilizing against a government calling itself socialist. A closer look reveals a trail of political schisms and realignments – especially increasing collaboration between right and left movements and parties against Correa – in what is amounts to a struggle for power over the country’s highest office.

Conaie, along with the electoral wing and mass fronts for the Marxist-Leninist Communist Party of Ecuador (PCMLE), were significant actors in the street mobilizations that brought down former president Jamil Mahuad (2000) and later Gutierrez (2005).

As many have pointed out, they were also part of the broad left front that brought Correa to power in 2006. With Correa’s PAIS (Proud and Sovereign Homeland) Alliance freshly formed, he sought the support of Conaie, its electoral arm Pachakutik as well as the PCMLE electoral wing the Popular Democratic Movement (MPD) in the campaign.

The first major rift occurred when Correa approached Pachakutik, offering to put their candidate for the position of vice president. According to journalist Juan Meriguet Martinez, “Correa held out to the eleventh hour hoping (Pachakutik) would accept the offer.” Pachakutik instead insisted on their leader, Luis Macas, running for President and Correa running as vice president.

Both Pachakutik and the MPD ran their own candidates, but ultimately supported Correa in the second round of voting.

The major break between the groups, however, occurred in 2009, when Correa began pushing for reform in the country’s notoriously poor education system. Fresh from a first round victory that saw Correa win the April 2009 election with 52 percent - a remarkable achievement given no president had won re-election since 1875 - the government introduced reforms to address quality of public education.

The move – especially measures that would remove unqualified teachers and make institutions improve accounting for public funds – led to protests from the UNE teachers union and FEUE student group, both fronts of the MPD/ PCMLE. Critics of the reforms maintain that the move betrayed Correa’s desire to reorient the country’s education system towards “the service of capital” – supporters argued that the system was full of unqualified teachers and that funds were diverted to the MPD through the influence that UNE wielded in the institutions.

“All of my friends who were MPD were given tenure, even if they hadn’t graduated” said Rocio Laiquez, a retired teacher who was forced to leave to Spain to find work. “I was a professional, but they did not give me a stable job. I only worked as a ‘substitute’ earning half (of regular pay).”

The reform passed and proved popular, but both Pachakutik and the MPD, commonly referred to in Ecuador as ‘los chinos’ due to the former Maoist orientation of their parent party the PCMLE, radicalized in their opposition to Correa.

On Sept. 30, 2010, police officers and some military undertook actions to protest changes in their remuneration - which actually increased their pay. The events turned violent, with police attacking Correa after the leader showed up to a barrack in Quito, while other officers blocked highways and airports, even occupying the national assembly. MPD leader Luis Villacis was among those officers outside of the assembly, telling the rebel police that his Marxist-Leninist outfit supported them, and that “they were also part of the people.”

By the time Correa was rescued from the police hospital that he had been forced to hide in, eight people were dead and 274 people wounded.

The PCMLE/ MPD and Pachakutik, who also released a statement in support of the police, refuse to call the events a coup. Former Pachakutik lawmaker Clever Jimenez went so far as to say Correa orchestrated the events, and accused the leader of ‘genocide.’

The events of Sept. 30, 2010 are undoubtedly a turning point in the relationship between ‘lefts’ in Ecuador, and these groups, namely Pachakutik and the MPD/PCMLE have increasingly collaborated with right-wing sectors.

Just before the 2013 presidential elections, banker and former finance minister Guillermo Lasso surprised many by introducing Aiki Tituaña, a leader within Conaie and Pachakutik, as his running mate.

Although both indigenous organizations condemned the pact, this would not be the only setback faced during the elections. Conaie, Pachakutik, MPD and others ran their own ticket with former constituent assembly head Alberto Acosta heading a coalition called the Plurinational Unity of the Lefts. Despite this ‘Unity’, the overall percent obtained by the parties plummeted to 3.26 percent, and their 9 seats in the National Assembly were reduced to 5.

Following the defeat – in which Correa upped his votes and where his PAIS Alliance won 74 percent of seats in the National Assembly – the anti-government ‘leftist’ groups maintained their activity, mainly organizing against government proposals and projects.

The groups were active among those protesting Correa’s announcement that 1 percent of oil from the YASUNI area would be exploited, after Ecuador’s innovative campaign to obtain funds to keep the resource in the ground, failed.

Indeed, they were also involved in protests against water and labor legislation, although others critical of the laws were looking for reforms to the proposals, rather than a scrapping of them. Proponents of the laws, including numerous social movements, point to the progressive elements in each - enshrining water as a public right that cannot be privatized, and integrating millions of workers, including domestic and informal workers in the country’s social security system.

Nonetheless, these groups have also begun to adopt the populist positions of Ecuador’s right-wing, and their collusion with their leaders and protests have become more evident.

At a protests against taxes on luxury imports in March, Carlos Perez of the Ecuarunari group told Reuters, “We are about to become a dictatorship. If there is indefinite re-election we will be the same as Venezuela, the same as Iraq, the same as Italy, as it was in Germany.” Perez also spoke against the tax proposal.

Two months later, Correa announced another tax proposal - this time directed at capital gains and inheritance taxes. Although the government emphasized that barely two percent of the population would be impacted by these taxes, the right-wing astutely seized the issue and began to organize protests.

Seeing that the protests were gathering steam and had their sights set on Correa (the common slogan in the marches and social media calls was ‘Fuera Correa Fuera’, or ‘Out Correa Out’), the groups began to join the demonstrations and adopt anti-tax calls. The MPD’s Villacis, Pachakutik legislator Lourdes Tiban and Andres Paez of Lasso’s CREO party – who has been accused of having links with Chevron – began holding June meetings, while the groups convened their own supporters for the right-wing rallies.

Following protests against the taxes in Quito, Guayaquil and other places, Conaie set a date for an ‘Indigenous Uprising’ while opposition-aligned trade unions announced a National ‘Work Stoppage.’

The groups put out a laundry list of demands, including:

● shelving the Water and Labor Laws;

● canceling a Trade Agreement with the EU; and

● ending a program designed to mass produce induction ovens, among others.

Despite this ‘broad’ support, the actions – which turned violent – were not able to attract the expected number of people to the streets, let alone to abandon their workplaces.

"The Ecuadorean people turned their backs on this strike,” Secretary-General of the PAIS Alliance Doris Soliz told the press. “Workers, business owners, people in the transportation sector, economic sectors did not go on strike."

While no official figure for the amount of protesters was released, there is a general sentiment that the popular uptake was a far cry from the days when Conaie and its allies successfully toppled governments.

A major difference between the actions and those of Conaie’s heyday – in addition to the operational alliance between these groups and right-wing sectors – was the segment of the left that supports Correa’s government, as well as those who support dialogue with it.

In response to the backlash against the tax proposals, Correa called for a ‘national dialogue’ on tackling the country’s persistent inequality and poverty. While Conaie and those calling for protests have refused to meet with officials, many groups, including labour unions, indigenous groups and social movements, have opted for talks with the government.

"We have come here today just to put forward the issues that led some people to take to the streets,” said Romelio Gualan, president of the Eloy Alfaro National Campesino Coordination, as he left one such dialogue table with government officials. “We have seen the opportunity for dialogue, to discuss the themes that are lagging behind in the countryside. We put this forward to the President of the National Assembly along with a timetable to see how we can make advances.”

On the same day that Ecuarunari’s Perez called for a military and police rebellion against Correa’s government, the head of the FUT trade union warned his members would go on a general strike if the National Assembly does not abandon its discussions around the constitutional amendments. The long list of demands has now boiled down to one clear objective – stop the possibility of Correa's reelection in 2017.

Meanwhile, most Ecuadorean’s are going about their lives, more concerned about the traffic jams caused by the relatively small but persistent protests, than the issues that opposition groups of the left and right have been pressing.

The rallies continue, as do government efforts to assuage policy concerns through talks. Nonetheless, there is an air of tension given the increasing violence of the protests and the lingering memory of the 2010 coup.