Colombia's Ivan Duque – candidate for the far-right party of former President Alvaro Uribe – is in a strong position ahead of the June 17 presidential elections, despite Uribe's long list of human rights abuses and links with paramilitary groups during his presidency. 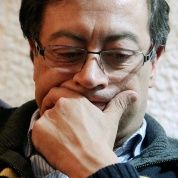 Duque's rival, Gustavo Petro, has an impressive record of social, political and cultural achievements as former mayor of Bogota. He created 417 parks for children; built a dependency of the District University in the suburbs; opened an office dedicated to women and a 'Citizen LGBTI Center,' and launched other centers providing legal advice for women seeking to interrupt a pregnancy.

Yet Petro is still struggling to gather the number of votes that would secure victory in the second round of the presidential elections, raising the question: why does the left struggle so much to gain a foothold in Colombia?

Unlike the rest of the continent, Colombia was not forced to live under a military dictatorship during the 1960s and 1970s. Still, the country ranks first in the region in regards to the number of forced disappearances. More than 215,000 people were killed and 5.7 million displaced as a result of the conflict between leftist guerrillas, right-wing paramilitary groups and national security forces.

1. The armed conflict has contributed to the association of left-wing parties with guerrilla violence

Petro's political enemies have emphasized Petro's past as a member of former guerrilla group M-19 – born in the 1970s and demobilized in the 1990s – because voters in Colombia tend to conflate guerrilla groups and left-wing political groups.

"Carlos Gaviria, the progressives, Navarro Wolf – these political leaders can say 'We aren't FARC, we are social democratic like the European Greens', but regular citizens don't see a difference between them and the FARC," John Fernando Restrepo Tamayo, a professor at the University of Medellin, told Al Jazeera. "People in the cities believe the left parties are emissaries for the guerrillas and the armed struggle."

Moreover, leftist leaders don't always make clear their ideological or practical divergences with the guerillas for the sake of public opinion.

"Leftist political parties don't differentiate themselves in their statements and propaganda from the armed leftist groups," Carlos Florez Lopez, author of 'Right and Left in Colombia 1920-1936,' told Al Jazeera. "This is because some of them believe in the theory of diversity of tactics."

2. Political and economic elites use the conflict as a way of avoiding having to share power

"Because of the armed conflict, Colombia has been able for years to avoid addressing strong protests or social demands," said sociologist Daniel Pecaut in an interview with El Tiempo. "The armed conflict has contributed to maintaining the social and political structures of the country, and even to increasing the concentration of land property, as well as the unequal distribution of revenues."

As a result, he said, Colombia has paradoxically shown consistent economic growth in the past 30 years, yet maintains the same level of social inequality as existed during the 1930s.

"Many sectors, not only the governing elites, found out, quite subconsciously, that the armed conflict was not disturbing the cities too much, but only the country's peripheries," he told Semana.

With the recent agrarian strikes that paralyzed Colombia, the ruling sectors of the country started fearing even more the possibility of social reforms – and the peace deal could create the conditions for such reforms.

Such sectors are represented by former President Alvaro Uribe, known for his close ties with paramilitary groups, who has led a consistent smear and fear-mongering campaign against the peace deal.

Uribe and the big landowners would rather risk international isolation – the peace deal was largely supported by the European Union, the United Nations and the United States – than bow to the possibility of even the slightest redistribution of land and wealth. To them, and the paramilitaries who back them, no political dissent can be tolerated.

"A modern country needs to accept social conflict; this is the price of democracy," warned Pecaut, who describes the country's divisions regarding the peace deal as "extremely worrying."

3. The physical elimination of generations of left-wing leaders, activists and supporters

The armed conflict has also resulted in the physical elimination of a whole generation of social leaders, mostly at the hands of paramilitary groups. This has seriously hampered the development of peaceful social movements in urban and rural areas, with trade unions, students, human rights activists and campesinos unable to mount large-scale protests against government policies.

More than 2,800 union activists were assassinated in Colombia between 1986 and 2013, according to the Pulitzer Center, and the pace of killings has increased despite the peace deal being signed in 2016. Social leaders and human rights defenders have become increasingly vulnerable, as zones previously under FARC control have now fallen into the hands of paramilitary groups and drug traffickers.

Nazih Richani, a political science professor at Kean University, told Al-Jazeera: "Right-wing regimes are killing massively the left-wing opposition. How can they organize or advocate for political power?"

Such "political genocide," targeting leftist activists and social elites and orchestrated by the "landed elite," explains more than any other factor the weakness of Colombia's left, Richani said.

4. The situation in neighboring Venezuela used as a scare tactic

Last but not least, Petro's conservative rivals never miss an occasion to play on the fear that this "Castro-chavista" would turn the country into a new Venezuela, putting at risk private property and the Catholic faith, or that Colombians will have to flee the country with nothing left but the clothes they are wearing.

This strategy seems to have paid off, according to a survey conducted by Cifras & Conceptos in March that found that 'Colombia turning into Venezuela' was voters' biggest fear, ahead of other issues such as unemployment, insecurity or health.

Colombians will give their final word on Sunday.