Diane Rodriguez doesn’t lie to herself, and she doesn’t want other trans women to lie to themselves either. 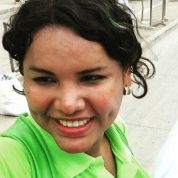 “The fight, the legitimate fight, the fight that seeks structural changes in a society, must be public: with a clean and open face, showing and saying who I really am,” Rodriguez, Ecuador’s first openly trans candidate for national assembly, told teleSUR. “It’s useless for me to put myself in a closet and to keep fighting, it’s impossible.”

Rodiguez has also drawn international headlines for being the first Ecuadorean to marry another trans person and for being the first trans couple to have a baby — given, of course, an androgynous name. But she’s not setting out to make headlines, she’s out to open doors for her LGBTI family. With their political participation, she said, comes a larger structural change in Ecuadorean society, a mental shift in how to view and treat the LGBTI community.

Since her first run in 2013 for the southern province of Guayas, Ecuador’s most populous, she’s already opened the door considerably: at least six openly gay candidates are running this year.

Rodriguez, 34, has been an activist since her teens, but her first encounter with electoral politics was not as fruitful. She ran with a party that she said was disorganized and jealous of her media attention, and she lost. This time, she’s running with the ruling Alianza Pais party, a left-wing coalition that came to power with current president Rafael Correa, who is ending his second and last term this month.

RELATED:
The 5 Biggest Gains for the LGBT Community in Latin America

Rodriguez met Correa the year she made electoral history with her first run when he invited her to the weekly changing of the guard ceremony. She took her window of opportunity with him to demand more windows, regularly, with the entire LGBTI community. Correa agreed.

The advances that Correa, Rodriguez and other activists have secured in LGBTI rights are a relief, she said, after a decade of zero change. Homosexuality was decriminalized in 1997, followed by a recognition of the right to one’s sexual orientation — so effectively, “trans and intersex people still did not exist during that time” — but successive administrations were more preoccupied with robbing citizens’ money than investing in equal rights, she said, calling it “a black mark in republican history” to never forget. (One of the current presidential candidates, Guillermo Lasso, was involved in the bank holiday in 1999 that cost the country billions and catapulted unemployment.)

When she was nominated as a pre-candidate she naturally chose Alianza Pais and enrolled in its political training school — something she said is unique to the party and has allowed it to carve professional candidates out of the most diverse pool of citizens: Afro-Ecuadoreans, campesinos, artisans, what have you.

Rodriguez is more confident in her chances this time around, but she has more than an established and still-popular party as credentials. A short list of her successes, as a political outsider: securing more health centers specifically serving LGBTI needs, delivering justice for the murder of 17 trans people, fining the country’s second-largest TV station for discriminating against trans people in a popular comedy show, recognizing same-sex civil unions including as a civil status, strengthening labor protections and winning the right to legally change one’s name and gender — rather than sex — on official ID cards.

The last victory, of registering gender rather than sex, was the most grueling but most rewarding of all, she said. While still controversial among some in the activist community — only ID cards of transgender people would include gender — the law is “unique and pioneering on a global level,” said Rodriguez. The closest policies are in Spain and Argentina, where a trans person would either have to register as mentally ill and then as a woman, which would be “falsifying information” and would “disappear our own trans population” since a trans woman is not a woman.

“To fulfill a feminine role within our society and to be respected for this feminine role is another question,” said Rodriguez. “It doesn’t mean that we must erase every trace (of our trans identity) in our lives. That would evidently erase a countless number of issues, including statistical data (on the trans community).”

While she said she respects the fights of other trans activists, she knows her own context well, and she couldn’t consider herself a full citizen until she saw her gender properly displayed on her official identification.

OPINION:
Interrupting Power: The Struggle for Trans and Migrant Rights

Before, clerks would look at her feminine name and face, then look at the sex on her ID card, then call management. That discrimination, she said, is avoidable with the new cards. And any other kind of discrimination can be prosecuted. Of the multiple cases she has filed and helped file, she has already set several legal precedents.

As progressive as the law may be in Ecuador, habits die hard. Rodriguez admitted, saying that LGBTI rights have a long way to go, and pledged not to renounce her constant battle to win over people who previously didn’t believe in her, in her rights. It’s one of the most difficult things, but by far the most rewarding as an activist, she said.

But, as a member of congress and representative of Alianza Pais, which represents all citizens, she won’t stop there.

“It would even be selfish on my part to win a seat in congress and only draft laws on the part of LGBTI people,” she said. “I want to make laws for women’s rights, for Afro-Ecuadorean rights, for disability rights — meaning, for all the groups of people historically excluded. More than anything, that's my focus.”