Five years ago today, Libyan President Muammar Gaddafi was killed and his body dragged through the streets of Sirte. But the West murdered his reputation long before the 2011 uprising."> 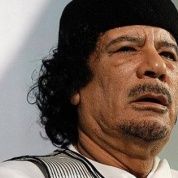 But the West had murdered Gaddafi's image long before the 2011 uprising.

RELATED:
Libyans Miss Gaddafi as They Mark 5 Years Since His Killing

Gaddafi was typically portrayed in Western media as a rambling, delusional dictator. But throughout Africa he was widely respected as a major figure in the pan-African movement, looking to focus closer ties between sub-Saharan Africa and the global diaspora.

Seizing power in a 1969 coup d'etat that overthrew King Idris, he immediately went to work installing a regime based on the socialist and nationalist ideology of Egypt's strongman, Gamel Abdel Nasser.  His “green book” was distributed across the country, rejecting capitalist democracy, and planting the seeds of his “Green Revolution.”

He championed the idea of African economic and political independence while chairman of the African Union, continually denouncing Western efforts to exploit and divide the Arab world, from the African world. Within the African Union, Gaddafi was lauded by many fellow heads-of-state, known for both an avuncular eccentrism, and a charismatic, fiery style of oratory, that often brought audiences to their feet with applause.

He was a favorite of Nelson Mandela and Hugo Chavez, former French President Nicholas Sarkozy and the Nation of Islam Leader Louis Farrakhan.

He was an authoritarian leader, but like his hero Nasser, his authoritarianism was more paternal than despotic. During his 42 year reign over Libya, he transformed the country into the most prosperous on the continent, provided free health care and housing and education–under Gaddafi a Libyan could go from kindergarten to a Ph.D without buying so much as a single book–and he managed to arrest the country’s tribal differences by maintaining close relationships with the country's various ethnic groups and tribal leaders.

However, Western nations accused Gaddafi of everything from blowing airplanes out of the sky to sexual assault and crimes against humanity. At the time of his death, he was wanted by the international Criminal Court, along with his son, for crimes against humanity and stifling political opponents and ordering attack on civilians during uprising against his rule.

But therein lay the source of his appeal closer to home. Africans and Arabs widely believe that the International Criminal Court is an instrument of imperialism–to this date, it has prosecuted only Africans in an era of the Iraq War and the almost incessant bombing of Pakistan and other countries–and the Libyan intelligence officer convicted of the 1988 bombing of Pan Am Flight 103 over Lockerbie, Scotland, almost certainly was not the real culprit, a 2009 London Review of Books article explained in painstaking detail.

While he was commonly grouped together with widely detested leaders of the time, Gaddafi did not earn an official spot in George W. Bush’s Axis of Evil, which included Saddam Hussein, Iran’s Mohammad Khatami and Kim Jong-il from North Korea.

However, Gaddafi scored a place in the minor league of Bush’s then Undersecretary of State John R. Bolton, and his labeling of “beyond the Axis of Evil” which included Libya, Syria and Cuba for their alleged flouting of international norms, sponsoring of terrorist organizations and wishes to obtain weapons of mass destruction.

In the wake of the Arab Spring uprising against authoritative governments in the region, NATO undertook a “humanitarian intervention” in Libya and early was heralded by western media and politicians as “one of the most successful in NATO history.”

Barack Obama, however, later acknowledged that the intervention was one of his most regrettable moments as U.S. president.

Writing in 2011, Hugh Robert explained the rhetoric behind the NATO intervention in his article, “Who Said Gaddafi had to go.”

“Two assertions that were endlessly reiterated - they were fundamental to the Western powers’ case for war - were that Gaddafi was engaged in ‘killing his own people’ and that he had ‘lost all legitimacy,’ the latter presented as the corollary of the former. Both assertions involved mystifications.”

Horace Campbell, in “NATO's Failure in Libya: Lessons for Africa” analyses how Security Council authorizations for the intervention changed from its initial “humanitarian intervention” justification.

“With the Western media fueling a propaganda campaign in the traditions of ‘manufacturing consent,’ the security council authorization was stretched from a clear and limited civilian protection mandate into a military campaign for regime change and the execution of the President of Libya, Muammar Gaddafi.”

But since his death, the media has paid little attention to Libya despite its growing chaos. As Tariq Ali explained “Libya is still in a mess, even though the coverage has been very muted in most of the world’s press.”

IN PHOTOS:
NATO 2011 War in Libya: Before and After

Gaddafi's death has exposed the sectarian tensions that he managed to contain for decades, with the country today split between  two governments claiming power, two parliaments, and two separate armies. The Islamic State group has gained a foothold, and rival rebel groups continue to fight over territory,

The World Bank has claimed that the country is on the brink of economic collapse and analysts have said the country is more or less in a state of anarchy. Thousands of people are opting to flee the violence and instability, fueling exploitative people smuggling often amounting to slavery.