When the Russian Revolution triumphed in October 1917, most of the rest of the world was colonized by the United Kingdom, France, Belgium, the Netherlands, Spain, and the United States. But under the leadership of Vladimir Lenin, the revolution became the inspiration for countless peoples, not only by showing that a workers’ state was possible, but also by providing practical, material and later military aid. The first example was the liberation of the colonies held by Tsarist Russia, which was known as a “prison house of nations.” 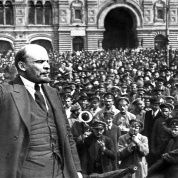 IN DEPTH:
Russian Revolution at 100

In 1919, the people of Egypt and Iraq rose up against British rule, the Koreans fought Japanese occupation and a revolution in Hungary resulted in the short-lived Hungarian Soviet Republic.

The Congress of the People’s of the East of 1920, or the Baku Congress, was an attempt by Lenin’s Bolsheviks to build a revolutionary Marxist movement of the exploited and oppressed peoples in the colonial world, while at the same time appealing to the advanced countries, especially in Europe, to lend support to these movements.

Some 1,891 delegates attended the congress from over 25 countries including Turkey, Persia, Egypt, India, Afghanistan, China, Japan, Korea, Syria, and Palestine.

The final manifesto read in part, “Here in Baku, on the borders of Europe and Asia, we representatives of tens of millions of peasants and workers of Asia and Africa in revolt showed the world our wounds, showed the world the marks of the whip on our backs, the traces left by the chains on our feet and hands. And we raised our daggers, revolvers and swords and swore before the world that we would use these weapons not to fight each other but to fight the capitalists. Believing profoundly that you, the workers of Europe and Asia, will unite with us under the banner of the Communist International for common struggle, for a common victory.”

The Communist International, or Comintern, was founded in 1919 by Lenin as a response to the Second International which had led the workers into World War I, backing their own imperialist countries against the unity of the working class. At its second congress in July 1920, the Comintern gave the anti-colonial struggle wide prominence and this emphasis would help shape the international communist movement for decades to come.

The Comintern was to play a major role in building communist parties around the world in both advanced countries as well as colonized states. Lenin’s uncompromising support for the right of nations to self-determination, up to and including secession, had a tremendous impact on the oppressed countries. He is credited with adding to Karl Marx and Friedrich Engels’ slogan, “Workers and oppressed of the world unite!"

His ground-breaking pamphlet, “Imperialism: The Highest Stage of Capitalism,” published in 1918, showed the capitalist system morphing into finance capital, with its tentacles extending throughout the world. He explained how this would become the basis for the union of national liberation and class struggle.

“Capitalism has grown into a world system of colonial oppression and of the financial strangulation of the overwhelming majority of the population of the world by a handful of ‘advanced’ countries. And this ‘booty’ is shared between two or three powerful world plunderers armed to the teeth.”

Soviets were formed in Cuba in this period and communist parties arose in many oppressed countries including South Africa, India, Indochina, Indonesia, Sudan, Iraq, Vietnam and elsewhere.

The First Conference of the Communist Parties of Latin America took place in Buenos Aires, Argentina in 1929. Some 38 delegates, from Argentina, Brazil, Bolivia, El Salvador, Guatemala, Cuba, Colombia, Ecuador, Mexico, Panama, Paraguay, Peru, Uruguay and Venezuela, took part in the meeting. The conference agreed that the revolution in Latin America should be anti-imperialist in nature, passing an accord of solidarity with the Soviet Union.

After World War II, with the Soviet defeat of Nazi Germany, almost all of Eastern Europe was liberated from imperialist rule.

In Vietnam after the surrender of Japan, Soviets were established all across the country and peasants seized the land, beginning the long road to independence which came 30 years later.

In 1949, the Chinese Revolution shook the world, bringing 700 million people into what was quickly becoming the socialist camp. By 1959, there were 14 socialists countries encompassing one billion people.

In this period, national liberation struggles swept the world. Encouraged by armed struggles in Asia, Algeria, Zimbabwe, Mozambique and other countries led resistance movements that were fiercely challenged by the corresponding colonizers.

In a memo about relations with the socialist camp after a meeting with Nikita Khrushchev in 1961, the Provisional Government of the Algerian Republic said, “The aid pledged has materialized: important arms shipments to the Eastern and the Western fronts … and then the acceptance of student pilots (to be trained in the Soviet Union).” In 1962, Algeria gained its independence, but not before the French assault killed over one million Africans.

When the first post-colonial countries started to emerge in Africa, the Middle East, Asia and Latin America, the Soviet Union gave tremendous military and material support to these states. Gamal Abdel Nasser’s Egypt, Sukarno of Indonesia, and Jawaharlal Nehru of India all benefited from this policy.

By 1965, Soviet aid to emerging countries surpassed US$9 billion in both economic and military assistance, according to state records.

This allowed these countries to carry out somewhat independent developmental policies that wouldn't have been possible within the world capitalist market. For the first time, they could trade on more equitable terms with the Soviet Union which was not subject to the boom-and-bust cycles of the capitalist system.

This was also true within the socialist camp, where countries such as the Democratic People’s Republic of Korea, Vietnam, Cuba and Eastern Europe were the beneficiaries of Soviet economic and military aid. The United States invasion of Korea was repelled with the direct assistance of the Soviet Union. The defeat of the U.S. in Vietnam was in large part due to the military backing of the Soviet Union.

And even though it never became part of the socialist camp, India’s first steel plant, which was handed over to the Indian government, was built by the Soviet Union.

When the U.K., France and Israel invaded Egypt in 1956, the Soviet Union assisted the country, which was eventually able to throw out the colonizers.

The Cuban Revolution of 1959 was seen as a tremendous threat by the United States even before Fidel Castro declared socialism as the ruling ideology. The U.S. imposed the all-encompassing economic and political blockade on the island and in 1961 orchestrated an invasion at the Bay of Pigs, which was thoroughly defeated by Cuban forces.

The Soviet Union provided both military and economic aid to the island nation, helping it to consolidate its revolution with preferential trading terms and military hardware that deterred any more U.S. invasions.

The socialist camp led by the Soviet Union had its shortcomings to be sure. The failure to assist and help to build revolutionary elements within bourgeois national liberation movements led to several betrayals of the most militant fighters after the death of Lenin in 1924 under the leadership of Josef Stalin, including the failed policy in the 1920s in China that led to the slaughter of thousands of communists by the bourgeois nationalists.

The illusion of rapprochement with the imperialists, which continued after Stalin, led to breaks with otherwise natural allies such as the People’s Republic of China; and to difficulties with other countries who accused the Soviet Union of not taking their unique situations under consideration.

Nevertheless, the strength of the Soviet Union and the socialist camp as a progressive pole for over 70 years, stayed the hand of imperialism and helped ensure the independence and development of many countries.

In South Africa, the Soviet Union built a relationship with the Communist Party and later with the African National Congress led by Oliver Tambo who said at a conference in Havana, “The Soviet Union, Cuba, many socialist countries have made it possible for many of the heads of state who are here today to survive, to win, to become leaders of independent countries. That was a crime against imperialism. We understand it.”

From the early 1960s, the Soviet Union provided military aid to the ANC’s Umkhonto we Sizwe and to the People's Movement for the Liberation of Angola. It also providing military and technical training in the Soviet Union for independence movements throughout the region.

In 1961, Kwame Nkrumah, the first prime minister of Ghana went on a tour through Eastern Europe, declaring his solidarity with the Soviet Union and China. In 1962, the Soviet Union awarded him the Lenin Peace Prize in acknowledgment of his Pan-African efforts to unite the continent against continued plunder.

Like many other anti-colonial leaders, Patrice Lumumba of the Congo found himself in the middle of the Cold War or the global class struggle. Many leaders didn’t want to face the hostility of the United States by turning to the Soviet Union for aid. In this vein, the Non-Aligned Movement rose in the mid-1950s.

Nevertheless, Lumumba did ask the Soviet Union for help and it was shortly after that, in 1960 that a coup was launched which led to the execution of the Pan-African leader.

WATCH: Empire Files: Post-Soviet Russia, Made in the U.S.A.

In 1962 the Patrice Lumumba University was founded in Moscow for students from developing countries. The stated purpose was to give young people from Asia, Africa and Latin America, especially from poor families, an opportunity to be educated and to become qualified specialists.

Millions of students were given free education in engineering, agriculture and other disciplines, over the course of Soviet history. Even the CIA acknowledged it, “The Soviets are also educating numerous Latin American and Caribbean students in the USSR, cultivating organized labor, and profiting from the growth of pro-Marxist sentiments among religious activists.”

When the Soviet Union was defeated in 1991, it had a devastating economic impact on the countries that had once received its aid and assistance. For Cuba it meant a “special period” of austerity. Vietnam was forced to let in Western capital. For India, it meant opening up to harsh dictates from the IMF and the privatization of state-owned industries. In Central America, the Farabundo Marti National Liberation Front was forced to compromise, as was the ANC in South Africa.

The end of the Soviet Union and the Russian Revolution saw a rise in imperialist aggression worldwide. Iraq, Somalia, Yugoslavia, Afghanistan, Libya and Syria have all been invaded by the U.S. in the wake of its demise. The fact that the socialist camp no longer exists as a counterweight is a tell-tale sign of its importance, not only against imperialist wars but as an inspiration and a base for socialism and liberation.