Venezuela's election process has been lauded by numerous organizations and observers not only for its high turnout, but also for the transparency and checks involved in the voting and scrutiny. 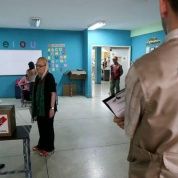 Former U.S. President Jimmy Carter said: "Of the 92 elections that we've monitored, I would say that the election process in Venezuela is the best in the world."

Below are all the elements involved in the vote.

Venezuelans who are 18 years of age or older are eligible to vote in an election, after registering.

Venezuelans living abroad are also eligible to vote, after meeting these requirements.

Article 63 of the constitution says: 'Suffrage is a right. It is exercised through free, universal, direct and secret ballots. The law will guarantee the principle of individuality of suffrage and proportional representation.'

Venezuela's elections utilize the latest in secure voting technology to ensure that each vote is counted fairly and cannot be tampered with. It was the first in the world to use voting machines that print a receipt so that each voter can confirm their vote with a physical copy.

The current voting machines in use are the Smartmatic Auditable Election System (SAES) by Smartmatic, which are 100 percent auditable at each stage.

The final vote count is confirmed with the physical vouchers that voters put in the receipt box, and then transmitted electronically through a network isolated from the internet and any computer to assure that no interference can assure.

The vote will be witnessed and audited by international and national political observers, technicians and political organizations. The National Electoral Council has invited the United Nations and the Caribbean Community (Caricom) to send representatives to observe the process.

These are the five steps involved in voting in Venezuela:

1. When arriving at a poll, voters are directed the voting table that corresponds to them. At the table, there is a list with voters' identification card numbers to allow a person to confirm their table.

2. The voter then goes to that table to present the document that confirms their identity. The voter then places their index finger or thumb on a fingerprint scanning device.

3. Once their identity is verified, the voting machine will unlock so that the voter can choose the option of their preference. Once selected, the choice can be changed up until the 'vote' button is changed.

In case there is any doubt about the voting process, the election official explains the steps involved.

After selecting their preferred option, the voter should press the 'vote' button. The machine then prints a receipt of the vote for the voter to read and confirm.

4. The voter then deposits this receipt in the corresponding ballot box.

5. Finally, the voter signs and places their fingerprint in the elections roll to confirm that they have voted, and have a finger marked with indelible ink.

Polls are closed at a polling station only after everyone in line to vote has voted.

Once tally scrutinization on the machine finishes, a random paper ballot audit announced where the machines to be audited are randomly selected drawing numbers, and the machine's serial number is recorded. The paper ballot box corresponding to the machine is also selected and opened and the results for each candidate are openly counted.

This is compared and audited with the original tally printed from the electronic results, and any anomaly or discrepancy is recorded in the audit report.

The original audit report is signed by election poll staff and observers from each party present, then sealed and handed to the military for delivery to the CNE.

Copies of the report are handed over to the representatives of the two highest vote getters.