President-elect Donald Trump and Democratic primary candidate Bernie Sanders, people say, have a lot in common. The two are mostly associated for their comparable yet opposite strands of populism. Both might also be said to have reinvigorated class analysis in U.S. politics. 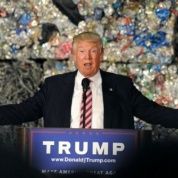 ANALYSIS:
5 Social Movements That Have Galvanized in the Age of Trump

Trump’s contribution, of course, is largely antithetical to Bernie’s. He has made promises that may resonate with middle America’s working class, from opposing free trade to bringing lost manufacturing jobs back to the U.S., but he has stopped short of invoking class struggle.

But give Trump a few years, months, days, and the working class said to have delivered him the electoral victory — or at least an important chunk of it — will start using the language of Bernie to oppose his actions and defend promises unfulfilled.

“You can talk about majoritarian working class politics in a way you haven’t in a while,” George Goehl, co-director of the grassroots network People’s Action, told teleSUR. Goehl, who grew up in rural Indiana, is well acquainted with the voters singled out time and again in the media — the worker in the post-industrial town who may have voted for Obama but opted for Trump in a last-minute, gut reaction move against Hillary Clinton’s Wall Street-friendly message.

While exit polls show that lower-income voters leaned toward Clinton and higher-income voters toward Trump, they also show that union households — and other working class indicators — preferred the Republican candidate this year than in the past. A New York Times analysis of the election results, eschewing conventional exit poll indicators, found that a “significant share” of Trump’s base “have largely missed the generation-long transition in the United States away from manufacturing and into a diverse, information-driven economy deeply intertwined with the rest of the world.” Many are still looking for jobs.

And in the U.S. in 2016, that’s a growing share of the population, not to mention the growing share of workers taking on lower-paid, precarious work with little to no benefits. According to a teleSUR analysis of Census data, the U.S. has seen a steady rise in the proportion of people receiving less than US$25,000 yearly since the beginning of the millennium. Others prefer to talk of exponentially growing economic inequality, which contrasts the impoverished lower classes with the skyrocketing wealth of the one percent.

Trump is no working class hero, but in the end, he delivered the message, according to the head of the United Auto Workers union Dennis Williams in a press conference days after election night. About one-third of his members voted Trump, while the leadership endorsed Clinton.

The error was more with the union bosses than the members, who signed onto a platform “which didn’t really prioritize the needs of workers,” Winnie Wong, a founding organizer of Occupy Wall Street and People for Bernie, told teleSUR.

“If a union does what they are supposed to do and are creating conditions where (they are) politicizing workers, we would have a very different outcome,” she said. That job, now, is left to organizers like her, who “at the end of the day are all working people in America.”

Trump is dangerous because he will privatize whatever’s left to privatize, said Wong, and social movement leaders need to ensure that progressives do not internalize the narrative of austerity,” which has gone on for “far too long.”

Ordinary workers may not know what austerity or neoliberalism are, Wong admitted, but once Trump policies are underway, the Walmart worker will feel what it means to lose Medicaid coverage and will “understand that something is wrong with the Trump government.”

For those reeled into Trump’s camp because he promised more jobs, he may soon lose his hook. Companies have started “reshoring” jobs for years, and manufacturing jobs in the U.S. are actually increasing while those in China are slowing down. Many of the jobs long-lost are also not lost to China; they’re lost because they’re now obsolete, with automation eating millions of factory jobs in the past few decades. On NAFTA, which did cost the U.S. a significant part of the labor force, his transition team is starting to temper his bolder promise of repeal. Even if he does repeal NAFTA, millions of other jobs that rely on the agreement would be lost.

RELATED:
Will Historic Women's March on Washington Unite All Women?

For those who already have a job, Trump will be no friend either. Labor Secretary pick Andrew Puzder, Carl’s Jr. magnate, would lead an “anti-worker department,” said Mary Kay Henry, president of the Service Employees International Union, which spearheaded the Fight for Fifteen campaign. He is skeptical of raising the federal minimum wage, supports less government regulation of the workforce and makes more money in a day than some of his workers in a year.

In terms of breaking up the power of elites, during his campaign Trump promised to double down on the revolving door between government and industry heads. He also promised to ensure the rich pay their fair share while trash talking hedge funds and proposing a better alternative to Obamacare. Based off of his cabinet appointments and own shifts in rhetoric, none of these will turn out as workers would want, said Goehl.

Already, working class issues have floated close to the mainstream over the course of the election season. Google Trends show that searches for “working class” peaked to its second-highest rate of all time in November 2016, the month of the election. “Socialism” also reached its second-highest rate in February of last year, its highest being in October 2008 — the month following the financial crisis — with the top three states — Idaho, Wyoming and West Virginia — overwhelmingly preferring Trump.

“Now more than ever is the time to organize the working class broadly,” said Goehl, adding that People’s Action will concentrate recruitment efforts in the Rust Belt and other rural areas. The network, which brings together diverse rural and urban groups fighting for racial and economic justice, already has members in these communities who are initiating door-to-door conversations with people “not exclusively labeled progressive” on what they hope for from their country. They hope to engage in hundreds of thousands of them, said Goehl, who is also staging rallies every Tuesday of Trump’s first 100 days and is ramping up a political education program, which in many cases will simply involve sharpening the language around structural economic injustice that many are already talking about around the kitchen table. According to Wong, this equates to the “unpacking” of a “30-year calcified, ossified ball of neoliberalism” and “neoliberal drift.”

As opposed to political campaigning, grassroots organizing is about not seeing communities as voting blocs, but as people, emphasizes Goehl. Conversations led by himself and his organization will lead to campaigns around the issues people are invested in locally. By the time the next election season comes about, he said he hopes the candidates will not disappoint as they did in 2016.

Wong is expecting to be disappointed by Democratic candidates — except by Sanders — but said she cares more about people than politicians anyway. She doesn’t see anyway she’d lose, either.

OPINION:
From Obama to Trump: The Failure of Passive Revolution

“There’s no such thing as failure if you’re an organizer,” Wong said. “Every conversation is an opportunity.”

That includes conversations with organizers themselves, who she finds often “organize in siloes” and should seize the anti-Trump tide to team up with labor, without which “we are fucked.” The economic side to political analysis — be it feminism or anti-pipeline work — has largely been missing in major organizing circles. As one of the co-authors of the Women’s March platform, then, Wong made sure to inject the document with language on class, because “when you talk about the workforce, you’re talking about working women of color.”

Goehl has already noticed one hopeful twist to the election season: the debate has evolved from seeing class, race and gender as competing categories to intersecting ones. When organizers talk about the working class, then, they’re not just talking about the white working class. And when they go door to door to expand their ranks, be it in cities or in rural towns, they pull from volunteers of all colors and gender. Despite what the election results may have suggested, he sees the “level of solidarity and unity among the progressive working class" in the U.S. as "pretty darn strong right now.”

Give the Trump-voting working class a bit of time, and soon enough they’ll begin to trickle in.