Days after taking over the second largest city in Iraq Mosul, Islamic State group leader Abu Bakr al-Baghdadi said “this blessed advance will not stop until we hit the last nail in the coffin of the Sykes-Picot conspiracy,” as he played at a longstanding negative sentiment that Arabs had against an imperial agreement that divided up the Ottoman territories among British and French colonial rule. 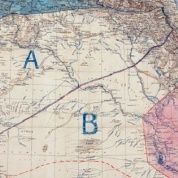 As the Sykes-Picot secret agreement between the United Kingdom and France turns 100, one cannot help but assert that the two main countries that were created as a result of the deal are largely two failed states that could disappear within the next few years.

At the height of the First World War, British Diplomat Sir Mark Sykes and French diplomat Francois Georges-Picot brokered a secret deal to draw “straight lines in the sand,” creating new nations from the ashes of Ottoman territories.

Iraq, Transjordan, which is today’s Kingdom of Jordan, and Palestine went to Britain while Syria and Lebanon were handed over to the French colonial power.

The agreement also sought to divide up today’s Turkey among Britain, France and Russia, the allies in World War I, a plan that never materialized due to the Turkish nationalist resistance led by Mustafa Kemal Ataturk.

The deal constituted a major betrayal by the colonial powers toward their Arab allies, who were promised to be given full independence in return for supporting Britain and France against the Ottoman Empire.

Sykes and Picot were both seen by their governments as the two most prominent “experts” on the Arab world and the Middle East. But the agreement had far-reaching consequences in shaping the current Middle East and its conflicts over the past 100 years.

In order to serve the interests of the world’s two biggest empires at the time, the two men simply ignored the ethnic and religious reality of the region while secretly laying the groundwork for the 1917 Balfour agreement that would bring Israel into existence three decades later at the expense of Palestine and its people, kicking off one of the region’s most complicated conflicts.

Iraq and Syria were made up of diverse ethnic and religious groups including Sunnis, Shiites, Christians and Kurds who did in fact live side by side but with semi-defined territories under Ottoman assigned rulers.

The nation-state model implemented by the Western powers simply brought this self rule within those ethnic and religious groups to an end, resulting in an evolving sectarian conflict that has been brewing for over a century.

“The nation state model, however, was ill-suited to provide a substitute for the Ottoman millet system which had ensured the security of the region’s many minorities, a failure at the root of many of the region’s current problems,” Peter Mangold, author of What the British Did: Two Centuries in the Middle East, wrote in a column for The National newspaper published Thursday.

This sectarian conflict was suppressed and put on hold in favor of a more urgent struggle against Western colonialism that lasted well into the first half of the 20th century.

This struggle was led by Arab nationalism and the ethnic and religious divide was suppressed, at times violently, by Arab strongmen and military figures who ended the pro-Western monarchies in Syria and Iraq.

In Iraq, the Baathist party led by late President Saddam Hussein, did the same by suppressing Kurdish nationalism and strengthening the post-British era Sunni rule that sidelined the Shiite in the country for decades.

ANALYSIS:
US Points Bloody Finger to Russian 'Intervention' in Syria

Despite a domestic iron fist rule, these leaders maintained foreign and economic policies that sought to make their countries independent from creeping Western influence in neighboring Arab Gulf states. Both Syria and Iraq are oil rich nations, a commodity that became central to Western policies in the region.

However, with the fall of those leaders and successive interventions by the United States and its allies, the sectarian conflict reached its peak and is currently flourishing.

Iraq and now Syria have been transformed into two failed states where extremist organizations like the Islamic State group and al-Qaida are free to exploit old anti-Western and sectarian sentiments in their favor.

Syria and Iraq as they once were under the old guard leaders no longer exist. Iraq has been divided into three clear regions, one led by the Shiite, another in the north led by the Kurds while the Islamic state group controls much of the Sunni regions.

Meanwhile, Syria has been unofficially divided into three different regions controlled by the Syrian government, Saudi and Turkish-allied rebels and the Islamic State group, while Syrian Kurds rule the northern regions.

“The Middle East we have known is over. I doubt that it will come back,” French intelligence director Bernard Bajolet told a CIA-sponsored panel discussion in October.

While the Sykes-Picot secret agreement is coming to an end, Western interference and attempts to shape the Middle East continue on as Washington and its allies fail to learn from past mistakes.

For today’s Western powers “when things went wrong, the problems which had been created were seen as needing to be “managed" rather than “solved”, John McHugo, author of A Concise History of the Arabs and Syria: A Recent History, wrote in a recent column for The National newspaper.

Instead of fixing what old colonial rule has created through secret self-serving agreements like Sykes-Picot, the U.S., the U.K. and their allies, including Turkey and Saudi Arabia, are continuing the legacy of such deals by using Syria and Iraq as battlefields to fight proxy wars for global and regional dominance.