With each passing year, the agrarian crisis in India worsens. Several factors have contributed to the corrosion of India's agriculture system, but for the most part, India's ever-expanding exposure to the free markets, along with the government's imposition of neo-liberal policies to fill their coffers have had the most substantial impact. The strategy of selling off mineral-rich lands and forested areas to giant cooperations has also created a number of issues for peasants, 'Kisan' in the largely agrarian South Asian nation. 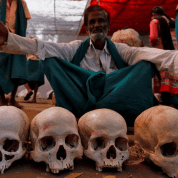 In March, for weeks, tens of thousands of Indian farmers rallied, under the red flag, meeting in several cities to list their agenda and demands for the government to implement peasant-friendly policies as part of broader agrarian reform.

Since 1995, four years after India opened its doors to free markets, according to India's National Crime Records Bureau, NCRB,  nearly 270,000 Indian cotton farmers have killed themselves. The 'Accidental Deaths & Suicides in India,' has placed the death toll for a cumulative 16-year at 256,913 deaths, the worst-ever recorded wave of suicides of this kind in human history.

Some of the experts have linked this wave of farmers' suicides to the expensive, out of reach genetically modified seeds, fertilizers, and insecticides. These genetically modified seeds are priced nearly four times higher than the ordinarily available seeds. One of the most popular being Bollgard, developed by Mahyco-Monsanto Biotech. Bollgard is genetically engineered with the Bacillus Thuringiensis (BT) gene and a protein that is toxic to the bollworm, a pest known to be harmful to the cotton plant.

Many of the commonly used pesticides in India contain chemicals that are banned in the West, yet to buy these expensive products, the poor peasants approach loan sharks, who lend them money on high interest rates.

And if the farmers' crops fail because of external factors, like unfavorable weather conditions, or even a dip in the global price of cotton, they are practically left with nothing but a massive debt with mounting interest.

In November, some 184 Indian farmers' groups came together to New Delhi, India's capital, to protest against the ongoing atrocities in the form of heavy interest on the loans they take from the formal and informal sectors, along with lack of agricultural reforms to help them cope with debt and increase their production.

The predominance of the informal sources of credit, primarily through moneylenders, and lack of capital for short term and long term loans have resulted in the absence of stable incomes and profits for farmers.

With the climate change, the unstable weather and disaster conditions, besides the drought, flooding and unseasonal rains, the looming risk of production, price, credit, and the market have been weighing farmers down.

M.S. Swaminathan also referred to as the father of green revolution in India, established the National Commission on Farmers (NCF) in 2004, to address the issue of this staggering number of farmers' suicides in the country. The commission came up with some simple yet crucial solutions to help alleviate farmers' concerns.

In a 2014 Guardian article, the UK daily showed a profile of a farmer's wife, a widow after her husband killed himself to escape the debt, explaining her plight which is a common one among many farmers in India's rural areas.

"Usha's husband, Marotrao, killed himself only a year after their wedding. She found him lying dead in their cotton field in Yavatmal. They had just three hectares of land, which was given to them by Usha's family. Usha says her husband had borrowed money to pay for Bt seeds, fertilizer and pesticides, but the rains did not come and his crops failed. After Marotrao's death, the government sold his land and used the money to pay off his debt. Usha says she was left with nothing," the Guardian reported, with a picture of the widow holding her deceased husband's photo.

Some of the measures, Swaminathan offered include, "the economic viability of farming by ensuring that farmers earn a "minimum net income," and ensure that agricultural progress is measured, by the advances made in improving that income, to develop and introduce a social security system and support services for farmers."

Along with, "protect and improve the land, water, biodiversity and climate resources essential for sustained advances in the productivity, profitability and stability of major farming systems by creating an economic stake in conservation, strengthen the biosecurity of crops, farm animals, fish and forest trees for safeguarding both the work and income security of farmer families, and the health and trade security of the nation."

Other important goals which the commission at the time set up were, "To foster community-centred food, water and energy security systems in rural India and to ensure nutrition security, to introduce measures which can help to attract and retain youth in farming by making it both intellectually stimulating and economically rewarding, by conferring the power and economy of scale to small and marginal farmers both in the production and post-harvest phases of farming."

A Long Poisoned History of Land Grab in India

The land grab is at the heart of the issues afflicting the farmers and Indigenous communities in India.  According to government figures, at 1.15 hectare, the average farm size in India is small, and since 1970-71, there has been a steady declining trend in land holdings.

The small and marginal land holdings (less than 2 hectares) account for 72 percent of land holdings, and this predominance of small operational holdings is a major limitation to reaping the benefits of economies of scale. Because of this, the small and marginal farmers have the little marketable surplus and are left with low bargaining power and no say over the prices.

With farmers demanding "freedom from debt and remunerative price," through these ongoing massive protests, until the land reform favoring these farmers is not implemented, they will not be genuinely liberated of the cyclical issues of crop production, and the issues like weather and disaster, price, credit, market, and policy will continue to play with their lives.

The issues faced by India's peasants and the Indigenous people run deeper and are obviously tied to the Indian state's economic approach, with shifting gears to the neoliberalism along with opening its economy to the free markets in 1991.

In 2012, Indian author and social activist, Arundhati Roy gave over an hour long compelling speech at the Earth at Risk conference in which she enumerated the effects of India embracing free markets.

In the speech, which is mostly a primer on how India lead by different governments, has not only failed to address the issues of the rural, Indigenous and tribal communities in India but also meddled in their lives by snatching their lands for extraction and mining, even resorting to large-scale violence if needed.

"In India, every institution, whether it’s the courts, or the parliament, or the press—has been hollowed out and harnessed to the free market," she said.

As S. Venkatanarayanan pointed out, in the essay, "Economic Liberalization in 1991 and Its Impact on Elementary Education in India."

"The market emerged as the central actor governing economic activity during the 1990s, and the ethos of neoliberalism progressively entrenched itself into law and public institutions in India. This change in “policy paradigms” implies a substantial reorganization of domestic political economies for an efficient governance of political and economic institutions in a longer run," he wrote.

In 1991, the year of the Dissolution of the Soviet Union, India opened its economy to free markets, marking a pivotal moment for India's agriculture industry.

"In the last fifty years, more than thirty million people have been displaced by big dams alone in India. Of course, most of those are Indigenous people or people who live off the land," Roy pointed out.

The South Asian country opened its doors to range of free market policies under the leadership of the then prime minister, P.V. Narsimha Rao of the country's leading opposition party, Congress, along with the then finance minister, Manmohan Singh, an economist by profession, who also had served as a former governor of the Reserve Bank of India, RBI, India's central banking institution, which controls the monetary policy of the Indian rupee, and is known to have deep ties to the World Bank and the International Monetary Fund, IMF.

Manmohan Singh, who paved the way for neoliberalism in the country also served as India's prime minister for a decade, from 2004 to 2014, without being democratically elected to the position. Critics argue that he was installed in the position by the World Bank and the IMF to promote their agendas in the country.

"Manmohan Singh was more or less installed by the IMF. He is the person when he was the finance minister, he dismantled all the laws and allowed global capital into India," Roy said in the speech.

In 2005, during the second term of economist Singh, Roy pointed out, "the Indian government signed hundreds of memorandums of understanding, MoUs, with the mining companies, with infrastructure companies, and more, to convert huge swathes of land in central India, India has 100 million Indigenous peoples.  If you look at the map of India, the minerals, the forests, and the Indigenous are all stacked up on one on top of the other."

India has more poor people than all the poorest countries of Africa put together, and it has 80 percent of the population living on less than 20 rupees a day, less than 50 cents a day, and that is the atmosphere in which the resistance movements are operating."

In the state of Chattisgarh, where the civil war is unfolding right now, the government raised this tribal militia which was funded by these corporations to go through the forests, and clear the people, so that these MoUs could be actualized. The media used to call the swathes as a Maoist corridor, some of us used to call it the MoUist corridor."

In her book, 'Field notes on Democracy: Listening to Grasshoppers,' Roy writes, "Though the theatre of wars is in the jungles of central India, it will have serious consequences for us all."

Adding, "The Indian Constitution, the moral underpinning of the Indian democracy was adopted by the Indian parliament in 1950, it was a tragic day for Indigenous people, the Constitution ratified  colonial policy, and made the State custodian of tribal homelands, overnight it turned the Indigenous populations into squatters on their own land, they denied them the traditional rights to forest produce. It criminalized a whole way of life in exchange for their right to vote; it snatched their right to livelihood and dignity."

"Having dispossessed them and push them into a downward spiral of indigence in a cruel slate of hand, the government began to use their own penury against them. Each time it needed to displace a large population for dams, irrigation projects, or mines, it talked of bringing tribals into the mainstream, of the tens of millions of internally displaced people, more than 30 million by the big dams alone, the refugees of India's progress, the great majority are tribals. So, when the government talks about tribal welfare, its time to worry."

"They are states that the decolonized Indian state immediately colonized. Now, those troops are actually defending the government’s rights to build big dams, to build power projects, to carry out the processes of privatization. In the last fifty years, more than thirty million people have been displaced by big dams alone in India. Of course, most of those are Indigenous people or people who live off the land."


The Guernica - The Hindu - The Guardian