Turkey has been rocked by devastating events and developments in both domestic and foreign affairs in 2016 that are most likely to have a lasting impact on the country for years to come, shaping the Turkish-Kurdish conflict as well as the conflict in neighboring Syria. 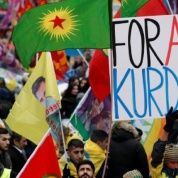 ANALYSIS:
A History of the Turkish-Kurdish Conflict

Following a failed coup in July that captured the attention of the world, Turkey’s government has worked to eliminate the country's democratic system, once hailed as a model for the Middle East and the so-called Muslim world.

One of the most notable blows to democracy that Erdogan mounted after the coup was a witch hunt against the leftist and pro-Kurdish People's Democratic Party, also known as the HDP.

Using state of emergency and the executive powers that come with it, Erdogan has ordered the arrest of thousands of Kurdish politicians, including dozens of mayors and leaders of the HDP, parliament's second biggest opposition party which has been accused of links to the Marxist Kurdish guerrilla group Kurdistan Workers' Party, known as the PKK.

The internal targeting of Kurdish politics has been accompanied with a recent invasion by Turkey into the northern parts of neighboring Syria as Ankara’s army supports Islamist rebel groups and targets the Syrian branch of the PKK, the People's Defense Units, known as the YPG.

Turkey and the U.S. have been at odds over Washington’s limited support to the Syrian Kurds against the Islamic State group.

But the second half of 2016 saw a shift on who is calling the shots in Syria as rebels supported by the U.S., and its Saudi and Qatari allies, have been losing ground to the Syrian Army with the help of Russian military.

Turkey and the U.S. have grown apart since the coup as many within the government accuse Washington of having a hand in the failed overthrow attempt.

RELATED:
Kurds in Crosshairs of Turkey's Invasion of Syria

Meanwhile, Ankara and Moscow mended ties earlier in 2016 after they clashed over the Turkish downing of a Russian fighter jet over the Syrian-Turkish border in November 2015.

After the coup, Russian President Vladimir Putin was the first to call Erdogan to express his support for the government and ever since then Ankara and Moscow have been steadily growing closer in Syria.

In December, Turkey, Russia and Iran managed to broker a cease-fire in Syria between government forces and opposition groups, excluding al-Qaida-affiliated ones and the Islamic State group.

The three nations are also kicking off peace talks in Kazakhstan later this month. The YPG and its allies said Wednesday they were not invited to the talks.

Many have seen the truce deal as a blow to U.S. efforts in Syria after several failed attempts at brokering a peace deal by the U.S. and Russia.

As the conflict continued for more than five years, the YPG has been mobilizing in the Rojava region, the Kurdish name of the region in northern Syria which is mostly populated by Kurds, in the hope of consolidating power there and gaining autonomy.

“The genie is out of the bottle,” Mutlu Civiroglu, a Kurdish affairs analyst, told teleSUR when asked about the federalism in the country. “Syria cannot be ruled with the style that has been in place for decades. Syria has already been divided … starting with the name, Syrian Arab Republic, things need to change,” if peace was to take place, he added.

A Turkish-Russian alliance is at the very least putting Kurdish aspirations in Syria at risk. Syrian President Bashar Assad has said that he would not support a federation-based system in the country, dealing a blow to autonomy hopes.

“It is not new that regional powers and world powers are sidelining the Kurds,“ Civiroglu said. However, he argued that this time around “the Kurds are not relying on those powers, but they are relying on their historic right to their ancestral lands and their power on the ground.”

The YPG along with, Arab, Assyrian, Armenian and Turkmen allies in Syria established the SDF last year, which has up to 50,000 fighters and receives military aid from Washington and has battled Islamic State group fighters with air force support from the U.S.-led coalition.

“I do not think that Kurds would accept being buried alive anymore,” Civiroglu argued as he described how his contacts with the YPG and the SDF have told him that thousands of fighters have been sacrificed in the fight against extremists groups in Syria over the past year or so. “You can't expect them to go back after paying a heavy price.”

The U.S., who used the Iraqi Kurds against Saddam Hussein in 1975 during his war with Iran, is arguably the only world power in Syria invested in the Kurds, long supporting them to further their own ambitions in the region.

With zero pressure from the U.S. in favor of the Kurds, Ankara, which supports anti-government groups and has called for the ouster of Assad, will now push its anti-Kurdish agenda at the peace talks in return for forcing its allies in Syria to stick to peace.

RELATED:
As They Walk Alone, Kurds Brace for a Better Future

While stressing that Syrian Kurds are not, in fact, separatists and are only asking for autonomy under a federal Syria, Civiroglu warned that if the YPG, which controls large and ethnically diverse territories in Syria, continue to be sidelined by regional and world powers, other marginalized groups in Syria would grow increasingly frustrated and their demands would shift towards leaving Syria.

Meanwhile Wladimir van Wilgenburg, an expert on Kurdish issues and a freelance journalist, further argued that the U.S. government led by Donald Trump could prove to be a friend to the Kurds.

"No, the United States needs the Kurds to fight ISIS,” Wilgenburg told teleSUR using an acronym for the Islamic State group. “There are currently 50,000 Syrian Democratic Forces that are backed by the U.S.-led coalition.”

But others argue that Washington's waning involvement in Syria would mean a repeat of history for the Kurds and their decades-long struggle across the Middle East, notably in Syria, Turkey, Iraq and Iran. Kurds, the biggest ethnic group in the world that has no homeland, have long been seen as pawns in proxy wars by world powers.

After the fall of the Ottoman Empire a century ago, the colonial powers of the U.K. and France took over the Levant area, which includes Syria and Iraq. They divided the region up in a way that paid no attention to the ethnic structure of those diverse regions.

Iraq and Syria were made up of diverse ethnic and religious groups including Sunnis, Shiites, Christians and Kurds, who did, in fact, live side by side but with semi-defined territories under Ottoman assigned rulers.

The nation-state model facilitated by the Western colonial powers brought any semblance of self-rule to an end by carving up random territories and installing friendly monarchies that cracked down on Kurdish nationalism.

Meanwhile, in Turkey, after the collapse of the Ottoman Empire, Turkish nationalists led by Mustafa Kemal Ataturk, fought off the imperialist powers, who were seeking to divide what is modern day Turkey into smaller territories.

Ataturk sought support from the Kurds living in what is now the southeast of Turkey and promised them self-rule in their region in return. After the war ended, he betrayed them and instead the nationalist nature of the Turkish republic systematically tried to erase Kurdish identity and culture.

Just as developments in Syria suggest a repeat of history for the Kurds, in Turkey Kurds are bracing for a crackdown on their rights similar to what occurred at the beginning of the last century.

With Erdogan’s party having a full majority in the Turkish assembly, the country is set to approve a constitutional amendment that would change the government from a parliamentary system to a presidential one, placing all power in the hands of one man: Erdogan.

In just two years and with limited powers Erdogan, who became president in 2014 after serving as prime minister since 2002, has already unleashed a massive wave of repression in Kurdish areas as part of his fight against the PKK.

"Most likely Turkey will continue its crackdown on the HDP and instability will continue in Turkey. It will be very difficult for the Kurds to attain any rights in this climate," Wilgenburg warned. “It's unlikely the Turkish government will try to go back to talks with the PKK.”

Human rights organizations say that Turkey’s southeast is facing a serious humanitarian crisis as hundreds of thousands of people have been displaced, hundreds of civilians killed amid clashes between the army and the Kurdish guerrillas.

More than 40,000 people have been killed since the PKK declared war against the Kurdish state in the 1970s. That number is only expected to rise when Erdogan secures his presidential system in 2017.

With the sidelining of the U.S. in Syria and cozy ties between Ankara and Moscow, as well as an emboldened Erdogan in Turkey through a presidential system and a post-coup boost in popular support, the Kurds could end up back at square one, abandoned by world and regional powers and left to fend for themselves.