Former army captain Jair Bolsonaro was sworn on Tuesday, in Brazilia, opening a new, rather dark, era for Brazil and for the whole Latin American region. 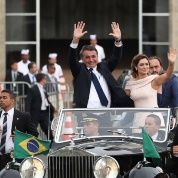 When he was a lawmaker, and then as a candidate and most recently as a president-elect, Bolsonaro, has regularly expressed far-right, neoliberal, racist, homophobic sentiments, the very same hate speech that saw him win the elections in the biggest country in South America, and one of the biggest economies in the world.

His inauguration has seen "unprecedented" security measures, as was promised by his Security Minister General Sergio Etchegoyen in December.

Even though his agenda has been kept secret, there have been enough announcements on what his policies will look like, and his cabinet has been completely named by now. teleSUR examines the impacts of a Jair Bolsonaro presidency for Brazil and for the region.

Reginaldo Lopes, a Brazilian federal lawmaker for the state of Minas Gerais, had stated in recent tweets that the new Brazilian president would "inaugurate a new modal: the anti-ministry."

Even before being sworn in, Bolsonaro has been appointing people that will completely change the institutionalization of Brazil.

"The Minister of Human Rights is against the defense of human rights. The Foreign Office is against diplomacy, the Environment is the defendant for disrespecting an environmental law and the Health wants to sell public health," tweeted Lopes.

Even before taking office, Bolsonaro had already announced the downsizing of the Brazilian state, which will be made, among other ways, by merging some ministries.

For example, he will unite the Environment ministry with the Ministry of Agriculture, in a country where the deforestation rate in favor of monocultural agro-industry is growing fast. The "defense" of the environment and the Amazon will be in the hand of the industrial landowners.

During the campaign, Bolsonaro had stated that his Brazilian executive branch would be made up of 15 ministries, however, his chief of staff (Chief of the Civil House), Onyx Lorenzoni, has announced that the government will have 22 ministries, seven more than initially suggested, and seven less than the current ministries.

Bolsonaro has already named the 22 ministers that will assume power on Jan. 1, among those, there are five members of the Armed Forces, an evangelical pastor and the judge who imprisoned former President Luiz Inacio Lula da Silva, effectively preventing him from running against Bolsonaro.

Bolsonaro's cabinet mostly includes the usual suspects of the fight against socialist and progressive movements inside Brazil, and in the region. Bolsonaro himself was involved in creating and launching the Conservative Summit of the Americas, where he vowed to "unite" the continent to "say no to socialism."

A cornerstone of Bolsonaro's government will be the fight against the progressive National Popular governments of Latina America that ruled the region during the last decade and are still in some countries. Bolsonaro has already said that he will oppose the democratically-elected governments of Cuba, Venezuela and Nicaragua, but his main objective is to continue the work of delegitimizing the Workers Party's (PT) governments of Lula and Dilma Rousseff.

The Bolsonaro staff begins with his election partner and now Vice-president Hamilton Murao, a retired military general. Murao has praised Brazil's intelligence and repression division during the military dictatorship, as has Bolsonaro, and referred to Carlos Brilhante Ustra as a "hero."

Murao has spoken against relationships between countries of the Global South, the "diplomacy called South-South. From that point on we were involved with all that 'dirt-bag scum'."

He has also spoken against the households of the poorest, specifically criticizing the single mother and grandmother households, calling them a "factory of maladjusted elements." Such comments give a glimpse into the approach the Bolsonaro government will take towards social development, which has already eliminated the ministry that took care of that specific area of governability.

"Human Rights are a very wise invention of Marxists," said once one of the bloodiest dictators of Latin America Augusto Pinochet. In a very Pinochet-like way of thinking, the now Brazilian minister of Foreign Affairs, Ernesto Araujo has said that he believes that climate change is a ploy by “cultural Marxists” to asphyxiate Western economies and protome China’s growth, and characterized climates science as “dogma."

As Reginaldo Lopes tweeted recently,  the ministry of "Foreign Affairs is against diplomacy," Araujo will follow the prerogatives of Murao and Bolsonaro and will focus the Brazilian relationships towards the North-South relationships, instead of strengthening the relationships among the Global South countries. One of the countries that Brazil will prioritize will be Israel, as Bolsonaro recently tweeted, the relationships between both countries "are on the right track," when Bolsonaro spoke about the recent visit of Benjamin Netanyahu to the South American Country.

But the Marxist ploy phrase is not the only inspiration that the Bolsonaro government will get from Pinochet. Paulo Guedes Bolsonaro's new Economy minister is a "Chicago Boy" that lectured at the Universidad de Chile during the Pinochet military dictatorship. Guedes' plans to transform the Brazilian economy are quite similar to those of the Chilean Dictator.

Bolsonaro has declared a war against redistribution of wealth by naming Guedes as Economy minister, who received his Ph.D. from the University of Chicago which is well-known for its approach and implementation of neoliberalism, especially in Latin America.

The new Brazilian government plans the radical deregulation of the Brazilian market, the privatization of all state-owned property and austerity measures for the government. These economic policies will be implemented with no regards to the environment, as could be induced from the aforementioned minister Araujo's statements, and no regards for the lower classes that have benefited from the social policies from the PT governments.

The new government will also have the fervent evangelical pastor Damares Alves - an ardent critic of the abortion rights movement, as the future minister of human rights, family and women. In this new way of government, human rights and women's rights will be under the guardianship of the "family values," and the minister of those will be an evangelical pastor. Alves is radically against abortion, in a country where a million women were forced to have clandestine abortions.

Alves also fiercely opposes sexual education in schools and predicts that the Bolsonaro government will scrap sexual education from public schools and forbid the use of concepts such as “gender perspective,” with some arguments as: "the G Spot is an invention of the Education Ministry of the Workers’ Party."
This is part of the "schools without party" bill that Bolsonaro has backed for long time, its defendants are working for the implementation of  local laws that are attempting to cleanse schools of "Marxist ideologies that promote homosexuality," as they call the sexual education in schools, these laws might become more federal once Bolsonaro and Alves assume their positions.

The new Human Rights, Family and Women Ministry will also be in charge of the National Foundation of the Indigenous (FUNAI), a previously independent institution that regulates issues related to the indigenous communities in the country. FUNAI is in charge of protecting the areas inhabited by Indigenous groups, including the isolated groups in the Amazon, and is one of Brazil’s last lines of defense against extractivist projects in the territory.

On previous information, in early December, Bolsonaro's chief of staff Onyx Lorenzoni stated the transitional team was joggling with the idea of placing the responsibility for Indigenous affairs under the control of the Brazilian Ministry of Agriculture.

Bolsonaro’s has stated that his point of view on Indigenous peoples is that they should be made a part of society which means that their land can be more easily exploited, which he argues would make them beneficiaries of the corresponding revenues coming out of those lands. "We will give them the means to be like us."

Indigenous groups and human rights defenders in Brazil have been speaking out against Bolsonaro, whose “careless” statements about Indigenous people have generated outrage, such as Bolsonaro's comment that Indigenous people in reserves are “as if they were animals in a zoo.”

Finally, as part of his plan for international relationships, Bolsonaro has vowed to unite the anti-communism in the Americas, as he said in early December when hosting the Conservative Summit of the Americas. For Eduardo Bolsonaro, Senator and son of Jair, "Latin America gets together to say no to socialism, no to the Sao Paulo Forum, we will not be the next Venezuela."

As aforementioned, the Bolsonaro government will target the Venezuelan, the Nicaraguan and the Cuban governments, but will probably also try to undermine and target other progressive governments in the region such as the Salvadorean of Sanchez Ceren, the Mexican led by Andres Manuel Lopez Obrador and the Bolivian led by Indigenous President Evo Morales.

According to Argentinian historian and activist Adrian Dubinsky, who spoke exclusively with teleSUR, "Regarding international relations (the Bolsonaro government means), there would be a genuflective alignment with U.S. foreign policy, leading to a coup in Venezuela, with the consequent, subsequent assassination of Maduro, leading to the constitution of an economic bloc along with Colombia, Chile and the current ArgentinegGovernment to deregulate South America's economy."