The G-20 summit will kick off this weekend in Turkey as world leaders gather in the country's southern Mediterranean resort city Antalya to discuss global economy, growth and international trade. 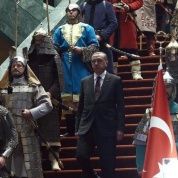 Member countries who will participate in the summit include not only the richest developed countries in the world, known as the G-7 (United States, United Kingdom, France, Germany, Canada, Italy and Japan), but also developing countries such as Turkey, Brazil, Argentina, India, China, Indonesia, Mexico and Saudi Arabia.

The countries attending represent more than 85 percent of the global economy, however, other countries with bigger economies than some G-20 members such as Venezuela, Iran or Switzerland are not represented in the summit.

Turkey will be hosting the summit this year as it holds the rotating presidency of the G-20. While the summit is traditionally about global economy and trade issues, in the past few years the summit has been reviewing social and political challenges facing the member states and others.

The Turkish President Recep Tayyip Erdogan, who will represent Turkey at the summit, said Wednesday that his country was putting conflicts in Syria and Iraq, the refugee crisis and the fight against the Islamic State group on the agenda.

He further asserted that his country was ready to take “stronger steps” on these conflicts after his ally the AKP party secured a major victory in the snap elections earlier this month. "Our inclusion of issues of Iraq and Syria to the G-20 agenda is not against the primary objectives of the platform," Erdogan told a business meeting in the capital Ankara.

The pro-government Yeni Safak newspaper said Turkey would share a 51-page "information note" on Syria at the G-20 summit, presenting formulas for a future without President Bashar Assad, and will insist on a 10-year "safe zone" plan for civilians in Northern Syria.

The chances are that such topics will be discussed as part of bilateral talks between heads of states attending on the sidelines of the summit.

20 suspected ISIS members detained in Turkey's #Antalya where G20 Summit will be held next week & Obama, other world leaders will attend.

Turkish daily Hurriyet, citing sources from the Turkey’s Foreign Ministry, reported that Ankara will highlight the negative effects of instability in Syria on all countries in the region including the European countries due to the refugee crisis. According to the paper, the situation in Syria and the refugee crisis will be discussed in the first day as suggested by Erdogan.

Turkey, a NATO member and a candidate for the EU, has taken in almost 2 million Syrian refugees and has suffered much of the spillover from the conflict in neighboring Syria. Since June, two bloody attacks took place in Turkey that killed over a hundred people.

OPINION: Massacre in Turkey’s Capital: Why?

Using the attacks and the chaos in the country as a pretext, but in reality a bid to influence the results of the recent snap elections, the AKP-led government launched in July two operations in Syria and Iraq. One against the Kurdistan's Workers Party (PKK) in the south of Turkey and in Northern Iraq, and another limited one against the Islamic State group in Syria.

However, the Turkish involvement in the conflicts in Syria and other countries in the region has been evolving over the past few years.

Since it came to power a decade ago, the ruling AKP has been trying to position the Muslim-majority Turkey as a key broker in the region and a model for democracy in the Middle East. Such sentiment by the government was clear during the Arab Spring protests that swept several countries between 2011 and 2013.

#Turkey president @RT_Erdogan says in #Egypt, Morsi was toppled by his own general

For instance, Turkey tried to influence the political change in Egypt by supporting ousted President Mohamed Morsi. Erdogan, then the prime minister, was the first head of state to visit Egypt after the 2011 protests and the election of Morsi. However, Ankara's policy in Egypt backfired as many within Egypt, even those who supported ousting the dictator Hosni Mubarak, saw Ankara as interfering in internal affairs.

Turkey yet again attempted the same maneuver in Syria by being the first country, only six months after the conflict broke out in Syria, to call on President Assad to step down, further alienating Syrians and even its allies, who opted for a non-interference policy, at least publically.

Turkey then went on to support all armed groups in Syria that were fighting Assad. It also maintained an open-border policy that many see as one of the main reasons behind the rise of the Islamic State group and other extremist groups there as many fighters entered Syria through the open Turkish border.

As Turkey hosts millions of refugees, many of whom are trying to move to European rich nations, where they could have more help and opportunities, the EU and Turkey struck a deal last month that would see Turkey imposing tougher border measurements to stem the flow of refugees.

In return, the EU would give Turkey billions of dollars in aid and speed up a visa-free resolution for Turks visiting Europe and reopen negotiations over Ankara’s EU membership.

Turkey applied for EU membership in 1987 and accession talks began in 2005, but Ankara has since completed just one of the 33 “chapters” needed to join the bloc.

However, Turkey’s attempt to give a strong leader-like impression through hosting the summit might prove difficult. While it remains part of the negotiations table on the Syrian conflict, Turkey has been sidelined as more powerful and important players, namely Russia and Iran, seem to be favored by the international community for brokering a deal between the Syrian government and the opposition.

"Neither the PKK nor PYD are considered terrorist organizations by either Russia or UN Security Council,” Russian Ambassador to Turkey.

That’s due to Turkey’s crackdown on the Kurdish rebels in Syria, who are fighting the Islamic State group and supported by Turkey’s allies, the U.S., the United Kingdom and some EU countries. Also Turkey’s position that Assad can not be part of a transition plan in Syria has not been received with much excitement.

Also, amid a controversy, some would call failing foreign policy, domestically the Turkish government has been increasingly viewed as an authoritarian regime, cracking down on protests, arresting and intimidating journalists and using state institutions to silence critical media outlets.

Such a climate in Turkey was evident in a recent critical EU report on Ankara's candidacy into the bloc, released on Nov. 10, just five days before the international summit.

It said the Turkish government was “backsliding” on the rule of law and freedom of expression, while the independence of the judiciary in the country has been undermined by the executive branch. The report also called on the government and Erdogan to resume the peace process with the Kurdish PKK guerrillas.

ANALYSIS: A History of the Turkish-Kurdish Conflict