The past decade was marked by a wave of women serving as presidents in every corner of Latin America and the Caribbean: from Argentina, Brazil, Chile and Costa Rica to Trinidad and Tobago. For the first time in recent memory, the region is now without a female head of state for the briefest of moments. On March 11, Chile's President Michelle Bachelet hands over power, and it won't be until March 19 that President-elect Paula-Mae Weekes takes over Trinidad and Tobago. The unifying theme underscoring these recent electoral victories point to women who play strong leadership roles throughout government at the international, national, state and local levels. In honor of International Women's Day, here we highlight five women representing their countries and regional governments: 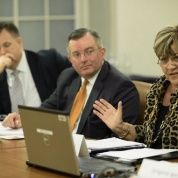 Saint Malo (far right) has the honor of being the first woman elected vice-president in Panama's history.  Panama typically combines the vice-president and foreign minister positions. Saint Malo's 15 years with the United Nations Development Program have been a huge asset for Panama's leadership in implementing the 17 Global Goals for Sustainable Development. Saint Malo frequently represents Panama on the world stage as a leading democratic country committed to economic development, social equality and facilitating dialogue.

Vice-President Cedeño was in the public spotlight as First Lady of the Dominican Republic from 2004 to 2012 while her husband, Leonel Fernandez, served as president. Cedeño has led internationally recognized programs in education, childhood development, nutrition, family planning and technology. She's the second woman to become vice-president in the Dominican Republic, the first being Milagros Ortiz Bosch in 2000. Before the 2012 elections, Cedeño was the latest example of Latin American first ladies vying to become president. She is very popular in the Dominican Republic, where supporters greet her with slogans such as "Llego mama" (Mom Has Arrived).

Puerto Rico's second-largest city, Ponce, elected Maria Melendez mayor in 2009. Following an extended economic crisis and the devastating 2017 hurricane, Melendez has emerged as an internationally acclaimed leader that Puerto Rico can rely on to help rebuild the island. A staunch defender of Puerto Ricans' rights as U.S. citizens, Melendez launched a campaign: 'We are Americans, too.' It has helped the city gain an audience to advocate for a more sustainable future and an urgent response to energy needs with U.S. senators, other state officials and business leaders. In January 2018, Melendez won the Antonio Villaraigosa Leadership Award as a Tribute to Mayors, and was described by Los Angeles Mayor Eric Garcetti as a "true American hero."

Paula-Mae Weekes is a Trinidadian legal professional and judge of the Turks and Caicos Islands Court of Appeal. She's also president-elect of Trinidad and Tobago, due to take office on March 19. Weekes will become the first woman to hold the office in Trinidadian history, as well as the nation's second female head of state overall, after Queen Elizabeth II. Weekes follows in the footsteps of first female Prime Minister Kamla Persad-Bissessar, who served from 2010 to 2015.

Patricia Espinosa has been a career diplomat since 1981. She is fluent in four languages and in 2015 was appointed to Ban Ki-Moon's high-level panel on sustainable development. In 2016, she succeeded Christiana Figueres of Costa Rica and became executive secretary of the United Nations Framework Convention on Climate Change (UNCCC). Espinosa brings to her new appointment more than 30 years' experience at the highest levels in international relations, specializing in sustainable development, gender equality, climate change, global governance and human rights. Before leading the UNCCC, she served as Mexico's ambassador to Germany (from 2001 to 2002 and again since 2013). She also served as minister of Foreign Affairs from 2006 to 2012.

The achievements of these women are well worth celebrating. However, much progress still needs to be made in integrating women and their leadership talents into our societies, governments and businesses. There are many women working everyday and making valuable contributions to their jobs, their communities and their families. International Women's Day is about honoring these women so that they can pave the way for more successful role models at every level of society.