Historically, Western media has focused on women's movements across Europe and North America, even claiming credit for Latin American feminism stemming from the region's socio-economic struggles. 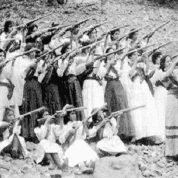 Some of the first female emancipators from Latin America came from wealth, but played an important role in shaping regional feminism.

Manuela Saenz, from Ecuador, is considered a "precursor to feminism and women's emancipation" and fought in the battles of Pichincha, Junin and Ayacucho in the 1820s. Saenz is best known for rising through the ranks to become a commander.

In 2007, the 185th anniversary of the Battle of Pichincha, she was designated Honorary General of the Republic of Ecuador.

Petra Herrera of Mexico disguised her gender and went by the name 'Pedro Herrera' to form an all-woman army after splitting from Pancho Villa, one of the most prominent generals in the Mexican revolution.

"Herrera blew up bridges and demonstrated extraordinary leadership abilities... having gained a reputation as an 'excellent soldier,' one day she showed everyone her braids and shouted 'I'm a woman and I will continue to carry out my duties as a soldier using my real name!'" Mexican author Elena Poniatowska writes in Las Soldaderas.

"Petra Herrera continued to fight in combat and took part, together with some 400 other women, in the second Battle of Torreon on May 30, 1914... Perhaps it was because her worth as a soldier was never formally recognized that Petra was motivated to form her own brigade, which quickly grew from 25 to 1,000 women.

RELATED:
Women Are 217 Years Away From Equal Pay

"In Mexico, in 1910, had the soldiers not carried their homes on their backs – their soldaderas with their cots, blankets, pots and provisions – the number of men who would have taken off to shelter themselves in a warm corner somewhere would have meant the end of their armies."

Another extraordinary feminist and figure in the Mexican Revolution, Juana Belen Gutierrez was a Mexican revolutionary and journalist known for being a staunch believer in agrarian reforms and the political agenda of Emiliano Zapata.

Chilean journalist and poet Gabriela Mistral (real name: Lucila Godoy Alcayaga) was the first Latin American to win a Nobel Prize in Literature for her powerful works with a pan-American perspective. Her 1924 book 'Lecturas para Mujeres' (Lectures by Women) celebrates Latin America from the viewpoint of a native.

Feminist sociologist Marcelo Rios Tobar, in the essay 'Feminism is Socialism, Liberty and Much More,' points out that authoritarian regimes reinforce "the traditional family and the dependent role of women, which is reduced to that of mother."

"Dictatorships institutionalize social inequality, so many Latin American feminists tie authoritarian governments with fewer rights for women. Slogans such as 'Women give life, the dictatorships exterminates it,' 'In the Day of the National Protest: Let's make love not the beds' and 'Feminism is Liberty, Socialism, and Much More' portrayed the demands of many Latin American feminists," Tobar writes.

Western feminism failed to acknowledge even the mainstream feminist movements forming in Latin America, let alone the intricate issues within them, such as interior colonialism and the lack of representation for Indigenous feminists.

The United Nations' International Women's Day seems to have failed women in the global South, where laws are becoming more regressive than progressive.

Every year, the date used to highlight atrocities such as sexual abuse and femicide – March 8 – is appropriated by the same corporations that have done very little to support the women in their midst.

This year, for instance, McDonald's chose to flip the 'M' on its logo to read 'W' in Lynwood, California. McDonald's is known for wage theft and not supporting the 'Fight for 15' minimum wage campaign. The fast-food giant has also been accused of violating fair wage standards: in 2016, it was ordered to pay a $US3.5 million wage-theft settlement to employees.

As Laura Parker, national coordinator of British left-wing group Momentum, points out in the Guardian: "This empty McFeminism has nothing to do with women's liberation and everything to do with McDonald's attempt to sanitise its image. If they actually cared about women, they'd pay their workers a living wage and stop forcing them onto zero-hours contracts."