In a small village in Acatlán de Osorio, Mexico a message traveled across the social media app Whatsapp that read, "Please everyone be alert because a plague of child kidnappers has entered the country," BBC reported. 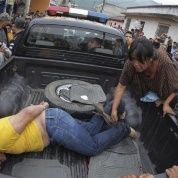 Within hours, a mob had gathered outside the local police station, demanding justice. Inside, sat two men; 21-year-old law student Ricardo Flores, and his uncle, 43-year-old Alberto. They had been arrested for "disturbing the peace" after an altercation with some locals, little did they know the angry crowd waiting outside the station believed they were the kidnappers the message had eluded to.

"It appears that these criminals are involved in organ trafficking...In the past few days, children aged four, eight and 14 have disappeared and some of these kids have been found dead with signs that their organs were removed. Their abdomens had been cut open and were empty."

Led by long-time Acatlán native Francisco "El Tecuanito" Martinez - who was livestreaming the events on Facebook, and a man known as "El Paisa," the mob grew in numbers, and also in ferocity. They found a way into the station, dragged the men out, beat them, then set them alight. Alberto Flores was still alive as he burned to death. Justice was done, or so the mob thought.

"We believe that of every 10 crimes, technology is used in nine," Jose Gil, the deputy minister for Information and Cyber Intelligence in Mexico City, told BBC.

Gil wasn´t wrong; while the savage beating was taking place, Ricardo's mother Maria was watching it all unfold via Facebook livestream. She pleaded with the crowd to stop - in vain. The same technology used to disseminate the fake information was the same Maria used to watch her son die.

WhatsApp, which was bought by Facebook for $19bn in 2014, has been the source of lynchings across the globe, often started by fake stories of child abductors.

According to a 2018 report by the Reuters Institute for the Study of Journalism, Both WhatsApp and Facebook are widely used for news consumption in Mexico.

Very recently, newly-elected Brazilian President Jair Bolsonaro, was caught up in a scandal of allegedly disseminating fake news stories using Whatsapp, in order to gain more votes. Despite being summoned to a court hearing, his campaign trail failed to lose momentum, and he was elected president days later.

"We believe the challenge of mob violence requires action from technology companies, civil society, and governments," Whatsapp officials told the BBC, while taking steps to minimize chain messages by limiting the amount of users messages can be forwarded to.

A spokesman for Facebook told the BBC the platform "did not want our services to be used to incite violence".

"Add gasoline," someone shouts in a Guatemalan village in 2015. The crowd duly oblige, as they douse a girl (believed to be only 16), on fire for allegedly murdering a taxi driver. The crowd began cheering as the girl rolled around in unimaginable agony - her final moments. No evidence was ever put forward that she indeed carried out a murder.

CNN reported that vigilante justice is a problem, particularly in rural areas where a lack of police officers result in a anachic system that benefits no-one.

Mario Polanco, representative of Guatemala's Grupo de Apoyo Mutuo human rights organization told CNN, "It is unfortunate these types of situations occur. They are produced by the weakness of the state's institutions to guarantee safety and justice for the population, and so (people) take justice into their own hands."

A similar situation took place in Guayaquil, Ecuador in October. A lynch mob burned two men and a woman alive, after rumors spread that they were child kidnappers. Local police explained in a press conference that the trio had been arrested for robbery.

Naomi Roht-Arriaza, Distinguished Prof. Law, Univ. of California, Hastings, speaking to CNN, said that people in rural villages don't trust the justice system, and therefore seek their own brand of justice. "People don't believe that, if any crimes are committed, people will go to jail ... especially if they're powerful. People literally get away with murder."

In April of this year, Canadian Sebastian Woodroffe, 41, was dragged by his neck through a village in Peru. His crime? He was strongly believed to have murdered elderly Amazonian spiritual leader Olivia Arevalo.

At the time of Woodroffe's lynching, it was believed he had murdered Arevalo over her reluctance to administer the mind-altering healing psychedelic, Ayahuasca. Months later however, and local authorities have questioned that claim, and dispute whether Arevalo was shot dead by another foreigner over an unpaid debt.

In his article, ´What is lynching and killer mob goes unpunished,' author Prabash K Dutta argues that the lack of specific laws simply exacerbate crimes such as lynching. Dutta claims that in India, where lynch mobs have been prevalent over the last 100 years, The Indian Penal Code does not mention the word, "lynching."

The same can be said for the aforementioned countries where the horrific atrocities were carried out, and until these laws are put in place, along with tighter security, as well as limits on social media dissemination, don't expect anything to change anytime soon.