Donald Trump, the billionaire businessman and reality TV star who has called Mexicans rapists and proposed barring Muslims from entering the United States, is currently leading every national poll for the Republican Party’s presidential nomination—and he has done more in a matter of months to advance and mainstream the ideas of neo-Nazis than self-proclaimed neo-Nazis have been able to accomplish in years. 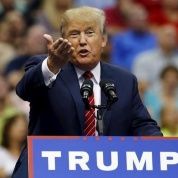 “Donald Trump is the real deal,” said William Daniel Johnson, chairman of the openly white supremacist American Freedom Party. “This is a unique phenomenon in modern politics,” he told teleSUR. “It is a throwback to a previous era.”

For years, people like Johnson, an attorney curiously based in the cultural melting pot of Los Angeles, have been trying to do what Trump is doing today: Introduce extreme right-wing racism into the political mainstream, devoid of the traditional baggage of Nazi imagery and the Ku Klux Klan. On its website, the American Freedom Party appeals to the libertarian right, denouncing torture, “secret wars of aggression abroad” and “the abandonment of due process and habeas corpus” at home.

The party’s true reason for existence is obscured, but not all that hard to find. “The American Freedom Party is a party that represents the interests and issues of European-Americans,” it states at the bottom of its list of grievances. Its mission: “Defending our borders, preserving our language and promoting our culture” —white, European culture.

Donald Trump does not identify as a “white nationalist,” a softer, gentler term for the racial separatism and white supremacy of neo-Nazis, but according to Johnson what “he espouses is the closest thing to (white) nationalism that we have seen since the Jingoistic era of Theodore Roosevelt,” the former U.S. president who spoke of non-European life as “absolutely incompatible with the existence of civilization.”

In 1985, William Daniel Johnson proposed amending the U.S. Constitution to strip anyone of their citizenship who was not “a non-Hispanic white of the European race.” | YouTube

“Virtually all pro-white nationalists are at least somewhat supportive of Donald Trump and most are even enthusiastic,” according to Johnson, who said he and his fellow fascists have set up a Trump Super PAC and are running radio ads in support of his candidacy. He doesn’t see the Republican frontrunner as competition, but rather as complementing what he is trying to do—he claims, in fact, that his own party “has seen a tremendous uptick in support because of Donald Trump.” For that reason,“Now is the time to help him … energize the masses,” he said. “It takes someone with the intestinal fortitude of a Donald Trump to lead the way.”

Trump is, of course, appealing to more than just avowed white nationalists.

“He is not governed by handlers,” said Johnson. “People like this approach and people trust him,” he said. “He does need to prep for speeches or concern himself with fallouts from gaffs. He is like Ron Paul in this respect, but where Ron Paul came across as a grumpy, eccentric grandpa, Donald Trump comes across as a wealthy, self-assured uncle.” Indeed, while Johnson’s father was a racist too, he “loved Mohammed Ali for the very same brashness that typifies Donald Trump.”

Ali aside, Trump is also more brazen than either Ron Paul—who Johnson met in 2010 when the former Republican congressman attended a campaign fundraiser at his house—or even Johnson himself, the chairman of an avowedly racist party.

In 2012, the American Freedom Party’s chairman ran for Congress in the state of Michigan, soft-selling his racism, albeit in the clunky manner befitting someone as viciously stupid as an American Nazi. “The Republican Party does not matter,” said a robocall for Johnson’s campaign that was left on voter’s answering machines. “The Democratic Party does not matter. But race matters. So does our environment.”

Johnson received 3,251 votes, or just under 1 percent, finishing behind all but a few write-in candidates.

Unlike Johnson, who comes across more like an accountant than a Fuhrer, Trump is a natural, confident and charismatic demagogue, one who similarly rails against the elites of both parties but doesn’t even try to polish his racism.

Immigrants, from Mexico and elsewhere, commit fewer crimes than those born in the United States, but as Johnson pointed out, Trump’s appeal is his “attitude,” which spares him from the need to be concerned with such things as facts. His appeal is to the gut of an angry white man and his political rise pronounces the death of “America’s effeminate era,” said Johnson.

A few days after he bashed Mexicans, Trump was polling nationally at just over 10 percent. By the time he got around to calling for a ban on Muslim immigration until “the dangerous threat it poses” is fully understood, he was polling at around 30 percent, with twice the support of his next closest rival for the Republican nomination.

Whether he ultimately wins or not, said Johnson, “Look for white nationalism to gain widespread acceptance and even a degree of admiration in the coming decade.”

INTERVIEW: A Refugee's Story: From War in Syria to Poverty in the US