President Rafael Correa will mark ten years in office on Jan. 15, 2017, having overseen the transformation of Ecuadorean politics and society. His successor will takeover from Correa after Feb. 19, 2017, when the nation's general election takes place. 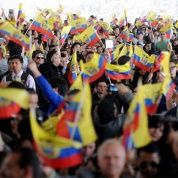 Before Correa, Ecuador was defined by its political and economic instability, with seven presidents forced out of office in a decade. Neoliberal measures applied by previous administrations left the country one of the poorest and least-developed in the region, but the government of Rafael Correa has undertaken a series of deep reforms, which have delivered remarkable changes for Ecuador's long-excluded majority.

In the process, Ecuador joined Bolivia and Venezuela in rejecting the extreme free-market policies that were forced on Latin America by the International Monetary Fund, and other similarly influential bodies. As President Rafael Correa said in 2014, “People must prevail over capital,” adding that politics is about whose interest governments serve: “Elites or the majority? Capital or humankind? The market or society? Policies and programs depend on who holds the balance of power."

A Society in Crisis

Before his election, economist and university professor Rafael Correa had served as the Economy Minister during the interim government of Alfredo Palacio, who succeeded ousted President Lucio Gutierrez.

The country had seen increasing political instability after the economy collapsed in a private banking crisis in 1999, leading to the adoption of the U.S. dollar as the national currency in 2000. Unemployment skyrocketed, and almost one in ten Ecuadoreans fled their country.

As Economy Minister, Correa expressed his opposition to Palacio's plans of signing a free trade agreement with the United States, and then resigned over a World Bank loan.

Ahead of the 2006 elections, Correa and several other Ecuadorean politicians founded the movement PAIS Alliance, and proposed the drafting of a new constitution to solve the crisis facing Ecuador.

After Correa took office, a constituent assembly was convoked and a new Constitution ratified by popular referendum.

Since then, the Citizens' Revolution – a name chosen by Correa's supporters commemorating the mass demonstrations that ousted presidents – has strengthened the Ecuadorean state, restoring its role in the country's economic development.

Under Correa, Ecuador's economy performed strongly, averaging 4 percent, and not only has the economic growth been among the best in the region, it has also favored the poorest in the country. Ecuador has outpaced other Latin American countries in the reduction of inequality.

That success was achieved in spite of the fact that Rafael Correa came to office on the eve of the global financial crisis and Ecuador being hampered by not having its own currency. Central to this success was Correa's rehabilitation of the economic role of the state, through huge public investment, to shape the market. Correa has repeatedly made it clear that although there is a role for the market in some areas, they can not dominate the economy, saying he supports "societies with markets and not a society of markets.”

Central to stronger growth was the emphasis of social investment over the servicing of foreign debt. As a result, the poverty index has fallen by one-third, with over 1.5 million lifted out of poverty since 2007.

“The Citizens' Revolution in Ecuador is “one of the most authentic revolutions in Latin America.”

The Citizens Revolution has pushed innovative policies to ensure greater social justice. For example, the minimum wage will be raised to US$366 in 2016, one of the highest in Latin America. 2015 also saw a comprehensive reform of the country's labor laws, which expanded the rights and protections of workers and saw the labor of homemakers recognized by the state with their incorporating into the social security system for the first time in the country's history.

Some economists speculated these changes would result in rising unemployment, but it has seen the contrary; Ecuador now has an unemployment rate of just 6.7 percent.

In education and health, too, which had been seriously neglected under previous governments, the Citizens' Revolution has made great strides. The Correa administration has restored the role of the state in both these sectors; guaranteeing free education up to university level, and implementing free healthcare. In 2015, Ecuador had the second highest level of public investment in higher education in the world. To fund much of this, the Correa government targeted tax evasion, a big problem which had been bleeding public revenues. Ecuador now raises three times more in taxes than it did in 2006.

As a result of this social change, President Correa has been seen as one of the most popular presidents in Latin America throughout his administration.

Meanwhile, public perception in Ecuador of governance, reduction of corruption, and the distribution of wealth is the highest in the region.

Furthermore, political stability has returned to the Andean nation. The president was re-elected in 2009 – following the adoption of the new constitution – and in 2013 general elections. Popular support has also helped him win popular referendums, in 2007, 2008 and 2011. All in all, Correa and his supporters have won 10 elections since 2007.

Correa’s attempts to refound the nation have included an emphasis on tackling discrimination to include long-neglected communities. During his first election campaign in 2006, Correa addressed his supporters in Quechua, the country's most widely-spoken Indigenous language.

In 2007, with the help of the Venezuelan government, Ecuador inaugurated its first public TV station and, together with the state-owned radio station, promoted programs in Quechua and other Indigenous languages. This has boosted the use of different native languages, which were formerly endangered.

Laws to protect minorities have also been implemented, including a law which compels companies to reserve four percent of jobs for people with disabilities, and other quotas for minority ethnic groups – such as Indigenous communities and Afro-Ecuadoreans – in order to narrow inequality gaps. The same has been applied in the country's higher education system, where Indigenous and to a lesser extent Afro-Ecuadorean community inclusion has soared.

With the new Media Law – approved in 2013 – the Indigenous communities have greater access to community media. The law assigns 34 percent of the country's radio and TV frequencies to community media. So far, 14 radio frequencies have been assigned to each of the country's Indigenous groups. The government will also provide training and special funding options to support the small media outlets, in an effort to continue promoting native languages and cultural exchanges.

Widespread changes to disability laws mean that people with physical and mental disabilities are much better-provided for than previously, and large-scale government campaigns have tackled discrimination and improved inclusion in society.

Backlash of the Elite

Attempts to disempower the old elites, entrenched over centuries, have met a concerted attack by right-wing politicians and organizations against the Correa government .

In order to tackle Western domination, the Correa government shut the U.S. military base in Manta, asserted control over the country’s oil and other natural resources, taking them away from domination by multinationals, and canceled the punishing international debt, which Correa explained meant in the past three times as much was spent on debt repayment than on social services.

As a result, fierce opposition came from the old elite and its allies in Washington, and the 2010 coup proved how concerned the old powers were at Correa's successes. On Sept. 30, a police strike ended up in a violent revolt against President Correa, who was held hostage in a hospital for several hours.

IN DEPTH:
The 2010 Coup Attempt in Ecuador

The clashes resulted in 10 deaths including a presidential guard. Documents emerged showing massive U.S. funding for policemen and opposition groups, through USAID. Despite this direct threat, Correa continued to assert an independent foreign policy; one of his boldest moves was granting Julian Assange asylum in the Ecuadorean embassy in London in 2012, fearing his extradition to the US for the role that Wikileaks played in exposing war crimes.

2015 saw a resurgence in this opposition after a numbers of years of social tranquility. Correa's opponents, together with elements of the private media, deliberately misinformed the Ecuadorean public about two bills aimed at increasing taxes on the wealthiest to address inequality in the country.

Another major transformation the Citizens' Revolution achieved was the restructuring of the judicial system. The National Court of Justice – the country's highest court – was revamped, and the outdated procedures of the past reformed.

This reform was key to addressing the human rights abuses carried during Leon Febres Cordero's presidency. The president – who is considered by many as a dictator – reigned over the judicial system through his designation of key positions to his closest allies.

President Correa's government established a truth commission to investigate human rights abuses in the country from 1984 to 2008. So far, nine people have been jailed on charges for crimes against humanity, due to their involvement in torture and murder during Febres Cordero's rule.

A landmark trial regarding human rights abuses committed against three former members of the group Alfaro Vive Carajo, a revolutionary guerrilla movement that once operated in Ecuador, is expected to begin in 2016.