Jaime Nebot is the voice of the coastal opposition of Guayaquil, Ecuador's wealthiest and largest city. He represents the country’s traditional oligarchy, which rose to power through the banana, cacao and coffee booms. Nebot has been mayor of the city on the Social Christian Party ticket since 2000. 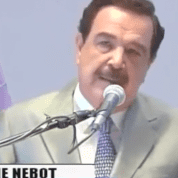 Nebot comes from a line of entrepreneurs, and his father was a minister under the dictatorship of Jose Maria Velasco Ibarra.

"The Ecuadorean oligarchy was not created by chance. The Ecuadorean oligarchy has been consolidating its fortune and power through actions such as tax evasion, customs fraud, kickbacks from oil companies, among other things,” said historian Jaime Galarza. “In agriculture with animals brought almost for free from New Zealand, or wherever they wanted, the oligarchy went about building their empire through defining these interests. And this is when Jaime Nebot Saadi came along as the beneficiary of this history of wealth accumulation and the formation of the oligarchy.”

Since the initial submission of the inheritance tax bill and the law for capital gains by the executive branch to the National Assembly on June 5, Nebot has been encouraging the opposition to protest the measures with social media, television commercials and bus advertisements.

He has called on citizens to take to the streets over these bills and against the government of President Rafael Correa, who has said that only 2 percent of the population would be affected by the progressive tax.

Nebot said in an interview with CNN on June 15, "I am part of this 2 percent, of people who are well-paid, and it is fine to pay taxes, what is not okay is confiscation. This is confiscation, and they have messed with the desires of people, of all social classes, and of everyone to seek progress. Success should be applauded, rather than a punished sin. People work to benefit their children."

Nebot began his political career during the bloodiest time in Ecuador's recent history, when he was appointed as governor of Guayas province by former President Leon Febres Cordero. The Truth Commission has released a report which describes in detail crimes committed during this period, specifically against the revolutionary guerrilla group Alfaro Vive Carajo.

A video clip released by the National Secretary of Communication shows Nebot saying, "Go out and use firearms! The parrots will come out anyway and cry for the protection of human rights. But this rotten part of our society needs to be shot down. They need to be shot down!"

Nebot has been identified as being a main player in state repression and terror, and, according to the Truth Commission, was present for interrogation and torture of those citizens suspected of being subversives.

Susana Cajas, a former member of Alfaro Vive Carajo and victim of what have been considered crimes against humanity committed during this period, said, "For repression, torture, assassinations, and disappearances to be part of government policy, these are intolerant and violent positions of leaders. This is how it is, and this is reaffirmed by the testimonies of our comrades, who say that Nebot was present at the time they fell victim to torture and the violation of their human rights."

Illicit deals and corruption have smeared Nebot's political career. As governor of Guayas, Nebot was charged with constructing the Perimetral highway, which serves the western side of Guayaquil. It was revealed that Nebot himself benefited through this public works project, which he designed to pass through his private land, called Las Orquideas.

The capital gains law, which Nebot has been calling on citizens to protest against, seeks to regulate such behavior.

The book, “El Lleve de la Perimetral,” denounces the shady deals made by Nebot during the construction of the highway. Author of the book Alfredo Vera said, “Nebot was involved in the real estate business, and he saw the perimetral as an opportunity, so that it could reach a site where he and some of his friends owned land, so this meant high capital gains. He proposed and promoted this idea to create gated communities there for different social classes. One was for the wealthy, with plots of 1,500 to 2,000 meters, and the other was for the poor, with plots that were 100 meters."

Nebot is a symbol of the opposition, and has run for president of the republic on two different occasions, but both times he was unable to win a significant majority. Using his political weight among the traditional oligarchy, Nebot has called on all Ecuadoreans to protest against the government of President Correa and proposed redistributive measures, which could see his own interests, and those of the wealthiest 2 percent affected.