As the Philippines president cancels peace talks with NPA guerrillas and vows to crack down on legal activists, we speak to BAYAN Secretary-General Renato Reyes, Jr. in this teleSUR exclusive. 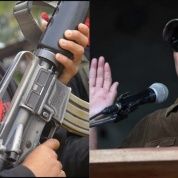 President Rodrigo Duterte has terminated peace talks with the New People's Army (NPA), the armed wing of the underground Communist Party of the Philippines (CPP), while vowing to treat combatants in East Asia's longest-running communist insurgency as "terrorists."

"I will follow America, since they say that I am an American boy," Duterte said. "OK, granted, I will admit that I am a fascist. I will categorize you already as a terrorist."

Both the CPP and the NPA have been included in the official U.S. government list of foreign terrorist organizations since 2002, shortly after then-President Gloria Macapagal Arroyo announced her own campaign to defeat them.

"We look at such threats as part of a greater plan to impose a fascist dictatorship."

On Wednesday, the Presidential Adviser on the Peace Process Secretary Jesus Dureza finally announced the formal cancellation of the peace talks.

“We are hereby announcing today the cancellation of all planned meetings with the CPP/NPA/NDF in line with President Duterte’s directive that there will be no more peace talks with them,” Dureza said.

“There will be no peace negotiations anymore with the CPP/NPA/NDF until such time as the desired enabling environment conducive to a change in the government’s position becomes evident ... Never before have we all reached this far in our negotiations with them," he added.

Since 1986, Manila has been engaged in on-again, off-again peace talks with the National Democratic Front, the united front representing the communist fighters and allied social movements.

While Duterte initially championed the peace process, which hinged on the implementation of an ambitious socio-economic reform agenda known as CASER, the negotiations were derailed in May after he declared martial law in Mindanao and launched a devastating five-month siege on alleged "Islamic State-aligned" rebels in Marawi City.

Duterte has lashed out at the reds for making "unreasonable demands" while failing to unilaterally "stand down" and halt their military operations.

The president has also threatened to crack down on legal social movements and mass organizations such as Bagong Alyansang Makabayan – the New Patriotic Alliance, or BAYAN – for allegedly "conspiring" with the guerrillas.

"(We remain) prepared and vigilant and look at such threats as part of a greater plan to impose a fascist dictatorship," Reyes explained.

Groups such as human rights monitor KARAPATAN, farmworkers' and peasants' unions, and housing rights group Kadamay have all reported the arbitrary detention of several of their members in the past week alone.

On Monday, the Communist Party issued an acerbic dismissal of Duterte's latest threats.

"Duterte is nothing if not consistent in his fascist rants and acts, using even the tired excuse of the progressive left 'conspiring' with the NPA, to constantly kowtow to the wishes of the higher echelons of the U.S.-controlled armed forces," the CPP Information Bureau said.

"He has resorted to namecalling and threats so many times, in so many forms, that the people have grown weary of his constant harping. Emboldened by the recent Trump approval of his strongman rule, he is bent on eliminating all opposition, legal and otherwise.

"The people recognize these threats against the revolutionary and progressive movement for what they are: to eliminate the strongest and most consistent opposition to his fascist rule, silence dissent against his anti-people and pro-imperialist policies and further perpetuate himself in power through a one-man rule."

Much of the Philippines left has made no secret of their sympathy toward the NPA, which they see as the armed branch of a genuine people's government fighting for national independence and democracy, guided by a socialist perspective. In the eyes of organizers such as Reyes, the NPA can't be defeated unless the social roots of the armed conflict are addressed.

"Duterte's recent threats of designating the NPA as a terrorist organization, following the U.S. line, will not accomplish anything except the intensified attacks on the people. It certainly will not stop the NPA from waging revolutionary struggle.

"The threat of a terrorist listing may also be used by Duterte to force the revolutionary forces to surrender, but that won't likely happen. In any case, if he does push through with it, it has the effect of terminating talks."

As recently as Oct. 20, Duterte had hinted that he would resume the negotiations with the NDFP, telling reporters: "I have to talk to the NPA still." Since the conclusion of the ASEAN leaders' summit in Manila and the visit of U.S. President Donald Trump, however, Duterte assumed a far more bellicose tone that precipitated Wednesday's cancellation of the peace process.

"The timing of the threat is not surprising since Duterte and Trump reaffirmed U.S.-Philippine relations," Reyes said. "Trump has increased military aid to the Philippines – Duterte may be thinking that U.S. support for counter-insurgency, terror listing and Martial Law are enough to defeat the revolutionary forces.

"His imagined 'conspiracy' between the NPA and the legal organizations under Bayan is meant to justify increased political repression in order to eliminate the most effective resistance to fascist dictatorship, human rights abuses, anti-people economic impositions and increased U.S. intervention."

On Tuesday, Duterte also threatened to shut down mines that pay "revolutionary taxes" to the Maoist combatants, accusing mine operators of depositing money in bank accounts maintained by the fighters in exchange for allowing their operations to continue.

"If I go against the communists, then everybody has to reconfigure their relationship with the New People's Army," he said. "If you support them financially, I will close you down."

Foreign-owned mining operations have an extensive presence throughout rural regions of the Philippines, digging for gold, nickel, copper, chromite and coal. The Mines and Geosciences Bureau say the country had an estimated US$840 billion worth of untapped mineral wealth as of 2012, making the Philippines a "prime piece of real estate" from an extractivist standpoint (to paraphrase Trump).

The activities of foreign miners have resulted in militarization, land grabs and extensive environmental damage to the ancestral lands of national minorities such as the Lumad, Cordillera and Moro peoples. Indigenous peoples are among the most consistent supporters of the NPA, who are seen as defenders of their land and livelihood from the process of "imperialist plunder" facilitated by local comprador elites.

Predictably, the country's mining bosses have eagerly welcomed the president's promises to wipe out the NPA and are pledging to comply with Duterte's new directive.

"We do not condone any member supporting the New People's Army through the payment of revolutionary taxes," said Ronald Recidoro, executive director at the Chamber of Mines of the Philippines.

"This is clearly against the law and they really should be prosecuted if they are found to be supporting these organizations. And if closure is warranted, that is within the prerogative of the president."

Recidero also complained that some miners had experienced their equipment being burned by the NPA because of a refusal to pay the taxes.

During his speech, Duterte further promised to build the military's domestic counter-insurgency capabilities. "I am fighting a rebellion... I have to build a strong army," he said, noting that the military would acquire 23 attack helicopters in the near future.

Despite the threats from Malacañang, the communists continue to project confidence in their ability to withstand the announced all-out war.

"Duterte is wrong in thinking that the revolutionary movement will just roll over and surrender in the face of his rants," the CPP said.

"He is wrong in thinking that the progressive movement will be cowed with his threats of a crackdown and mass arrests. The democratic mass movement will continue to strengthen itself by organizing, propaganda and militant mobilizations, while the revolutionary forces will continue advancing the people's war comprehensively to achieve genuine democracy and national sovereignty."

Likewise, Reyes is sure that Duterte's attacks on the Philippines left are doomed to backfire. "Duterte's pronouncements will only fan the flames of struggle – he would be the best argument on why revolutionary struggle is needed.

"Marcos in 1972 attempted to do the same, but his dictatorship was eventually overthrown and the mass movement grew. Any attempt to impose a dictatorship now will be met with fierce resistance by the people."