Why do thousands of Hondurans leave their homeland on an adventure toward a country that is not awaiting to welcome their arrival? 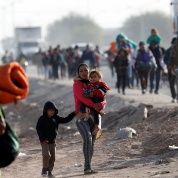 Poverty would seem to be the obvious answer. But that word, when it is not lived in the flesh, does not convey or explain the magnitude of the pilgrims’ despair.

Unlike other Central American countries such as Panama or Costa Rica, Honduras has never been a nice place to live for the Poor. The essence of its human trama remains practically intact since the 1950s when the practitioners of "economic development" - which the U.S. exported to diagnose such aspects of its domains - qualified Honduras as an underdeveloped country.

RELATED:
The US Responsibility in Visible and Nonvisible Migration

At that time, the counterinsurgency economist, Walt Rostow, promised "the American dream" for Latin American countries if they were eager to modernize themselves. In "The Stages of Economic Growth, an Anti-Communist Manifesto," he argued that modernization is a process in which urban population, manufacturing industries, technological and scientific education, democratic institutions, and mass consumption predominate. From the viewpoint of an economist appointed by President Kennedy to the U.S. National Security Council, modernization was the next inevitable stage of development, one which was meant to be in the image and likeness of the 20th-century U.S. capitalism.

To reach that stage, Latin American economies only needed a "take off", which would initially be led by foreign investments. From Rostow's linear view of economic growth history, Latin American countries’ backwardness would be also overcome through democracy and its representative institutions.

At that time, however, left-wing economists warned about the fragility of Honduras. This was one of those countries that were, and very likely would continue to be, "banana republics”, a motto that described those societies trapped in the business of exporting cheap commodities. These countries produced their "fruits, desserts and salads" on the haciendas of landlords, most of whom preferred hardline governments rather than progressive ones.

Amid the Cold War, the U.S supported Honduras to begin its modernization process. But this geopolitically-driven aid did not allow the country to ‘jump’ easily to an industrial economy.

In order to reduce its dependence on bananas exports, Honduran modernization reinforced its primary sector by producing meat, cotton, coffee, sugar, wood, and tobacco. In Honduras the extent of agricultural employment was overwhelming in the 1950s: 83.1 percent of the Economically Active Population (EAP) worked in agriculture, and 44.8 percent of this working force was provided by unpaid family labor. Although this pre-modern practice did not contribute to a fast expansion of market institutions, the rural, Indigenous families’ cheap labor was particularly favorable to multiply agribusiness and to enhance their profits.

Political modernization, however, was not on the country’s horizon. Due to the widespread presence of rebel movements in Central America, the U.S. ‘delayed’ the consolidation of representative institutions until the 1980s. Meanwhile, Honduras’ governance was achieved in two ways: from above, with authoritarian governments that relied on the Army to contain social organizations; and, from below, with landowners who financed mercenaries to curb workers’ demands. Once the external financial resources aimed at keeping the country as an insurgent-free territory disappeared, the Honduran economy entered into a long-term decline that is continuing to this day.

The post-war “American peace” meant to Honduras a delay in its market-driven modernization. For its economy was incapable of generating significant levels of investment on its own. When the country’s geopolitical importance faded in the mid-1990s, 75 percent of the Honduran population was still living in poverty.

Honduras was an early practitioner of structural adjustment policies within Central America. Its first free trade zone began to operate in 1978 and there were seven free trade zones and 5 industrial processing zones ‘maquilas’ installed in 1993. This new wave of modernization, however, was carried out without fostering better salaries.

In his book “From the Finca to the Maquila”, Juan Pablo Perez recalls that the ‘maquila miracle’ was made with average wages worth of US$0.53 per hour. And things did not improve immediately as the average wage was 0.48 per hour in 1991. In its eternal path towards economic modernization, Honduras embraced the principles of ‘flexible specialization’, a fancy name to say that workers would be deprived of well-paid jobs. Needless to say that women’s salaries were lower than their male colleagues.

Besides fostering low salaries for export-oriented, labor-intensive industries, Honduran elites also prompted delocalized production processes in the form of maquila’s workshops within rural communities, a strategy which allowed them to control labor force. Once again, profit opportunities were triggered in a non-modern fashion: by placing maquilas inside poor households, the entrepreneurs made the non-formally hired members of the households work for free. The ultimate consequence of this growth style was the consolidation of a cheap working class with no prospects for saving potential.

At the Washington Consensus era, multilateral institutions sold another round of dreams based on free trade, state downsizing, and productive specialization. And they did it precisely in a country whose economy had remained exposed to external demand shocks. Honduran political and business elites enthusiastically embraced those illusions, even though other Latin American countries had already experienced the failure of structural adjustment policies.

In 2005, 65 percent of the Honduran exports was based on maquilas and its apparel production was geared almost exclusively for the U.S. market. In order to cope with Asian competitors, Honduras again resorted to a proven success formula for sustaining low wages across time: keep workers without qualification, good education and access to formal jobs. Overwhelmed by these three burdens, any Honduran was (and is) willing to accept any job at any price.

Honduras thus adhered to the “Free Trade Agreement between the United States, Central America and the Dominican Republic” (CAFTA) in 2006, hoping that Rostow’s promised “take off” would finally happen. And the change did happen, but not as imagined.

In a country where political institutions were not designed to break asymmetries between the rich and the poor, “non-inclusive economic growth” was consolidated as a paradox.

In ‘The Economic Development of Latin America Since Independence’, Luis Bertola & Jose Antonio highlight that, around 2008, 33 percent of Honduran exports were related to commodities, 25 percent to natural resource-based manufactures, and 6 percent to low-technology goods. Honduran exports that require highly qualified work represented barely 0.9 percent of the total exported.

Between 2000 and 2008, in Honduras, the real GDP average annual growth rate was 4.1 percent, an output expansion still based on commodities and natural resources-based goods. As a consequence of this apparent productive diversification, Honduras entered a serious recession after 2008 when the prices of commodities felt.

This result, however, was predictable. In a CAFTA evaluation published in 2005, the World Bank revealed that "ironically, although Honduras has been the country that has achieved the highest degree of economic openness in relation to its level of income, it is also the country with the record for least growth in Central America since the early 1990s."

The 2008 economic recession accelerated a political crisis that, with the subtle support of the U.S. and its allies, paved the way for a coup d'état against President José Manuel Zelaya in June 2009.

"U.S. and European oil multinationals declared war on me and described me as an enemy of the private sector. Of course, the private sector’s conservatives did not like my policy because I privileged the rules of the market, favored competition and put an end to monopoly,” Zelaya told Rebelion in an interview following the events.

“I made the demand regulate the offer, and put an end to a situation in which monopolies and concessions to private companies altered the rules of the market. The reason for my disagreement with the U.S. government was my breaking-the-monopolies policy. The private sector, which was strictly opposed to competition and wished to retain its control of the economy, also opposed my authority. Private companies then planned a coup d'état… [they] were financed by foreign multinationals.”

Once the right-wing forces got rid of a progressive government -which reduced poverty rate by 7.7 points and extreme poverty rate by 20.9 points as well as raised the minimum wage by 60 percent- the redistribution of social wealth and the reduction of inequalities disappeared again from macroeconomic priorities.

In “Honduras Since the Coup”, Jake Johnston & Stephan Lefebvre found out that “in the two years after the coup, over 100 percent of all real income gains went to the wealthiest 10 percent of Hondurans… From 2010-2012, the poverty rate increased by 13.2 percent while the extreme poverty rate increased by 26.3 percent… The number of involuntary part-time workers and those unemployed has increased from 6.8 percent in 2008 to 14.1 percent in 2012… the number of people working full-time but not receiving the minimum wage has gone from 28.8 percent of the labor force in 2008 to 43.6 percent in 2012.”

RELATED:
How Corruption and Violence Overshadow the 2017 Honduras Elections

Certainly, between 2010 and 2017, the real GDP average annual growth rate was 3.3 percent. Nevertheless, this has been a fragile output recovery, which is likely to last until Honduran exportable goods’ prices fall again. On its website, the World Bank seems to recognize this possibility:

After 50 years of a Rostowian modernization, which has been controlled by elites that are not pressured to increase domestic consumption so as to sustain their own businesses, Honduras remains a country whose growth is not based on productive efficiency but on labor exploitation.

Using the Ministry of Labor’s 2018 Minimum Wages Table -in effect on Nov. 19, 2018-, it can be seen that the agricultural worker’s average wage is US$9.1 a day, and the industrial-exporting worker’s average wage is US$9.8 a day. Given that the basic food basket costs US$346 per month, in order to feed a family with an average of five members, an agricultural worker would need to work 38 days a month and an industrial-exporting worker 35 days a month.

In a country with such a clear economic intervention by the United States that has rendered the population unable to realize its own potential and instead severe U.S. economic and political interests, it is hard to avoid including Washington’s policies as one of the main factors behind the Central American migrant caravan.