Jeremy Corbyn's gains in the British general election mollified his political opponents, ranging from Rupert Murdoch's yellow press to officials in Tel Aviv, drawing outrage over his support for causes considered taboo in Western capitals. Foremost among these causes is the popular opposition to Israeli war crimes and settler-colonialism in Palestine. 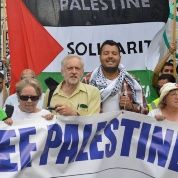 In fact, the Israeli state was established thanks, in no small part, to the British Empire's occupation of the region following the collapse of the Ottoman Empire, with Labour Party support playing a crucial role in laying the early groundwork for the state's creation. Labour's support for Zionism began when Sidney Webb, a founding leader of the Fabian socialist movement, penned the Memorandum on the Issues of War in August 1917, three months before the issuance of the Balfour Declaration, which recommended the creation of a “national home for the Jewish people.”

The document codified British Labour's embrace of the First World War on the grounds that “the world may henceforth be made safe for democracy” through British war efforts while ironically denouncing “the imperialist aims of governments and capitalists” in the Middle East. The document also made a firm commitment to the resettlement of Jews in Palestine, calling for a "free state" to which European Jewry would be entitled the right to “work out their salvation, free from interference by those of alien race and religion.” Of course, British support for Zionism was a cynical and self-serving means to advance its own geopolitical interests in the region.

Labour's 2017 election manifesto reflected, to some extent, a pro-Palestine mood among the party's increasingly young support base that resembles Corbyn's own record of solidarity with the Palestinian cause. In addition to revealing a social democratic aspect of Labour long suppressed or hidden from sight, the document stated the party's commitment to a "two-state solution" to Israeli expansionism in Palestinian territories, warning Israeli authorities that it won't tolerate further militarist excesses. It also states that a Labour government would “immediately recognize" the de jure Palestinian West Bank state. The manifesto further calls for a “world free from all forms of racism, anti-Semitism and Islamophobia.”

However, the Israeli lobby – through the Labour Friends of Israel and the press – spared no effort to have references to West Bank settlements as “wrong and illegal” removed from the final draft of the party platform while also axeing a line referring to the "the continued humanitarian crisis in the Occupied Palestinian Territories." The manifesto also falsely equates Palestinian resistance "rocket and terror attacks" with the highly-advanced, destructive weaponry of the Israeli state.

The equivocation surrounding the drafting of points on the Israeli-Palestinian "conflict" raised questions about Corbyn's willingness – or, rather, his ability – to consistently stand alongside the Palestinian struggle for self-determination while simultaneously leading Britain's institutional center-left party.

Corbyn himself has visited Palestine nine times, in addition to multiple visits to refugee camps in Lebanon and Syria. In 2013, following his return from the Gaza Strip, he wrote to then-Foreign Secretary William Hague and urged that the U.K. “stop allowing Israel's criminal politicians to come to our country.” The Labour leader has also called for the lifting of the blockade on Gaza, an end to the abuse of Palestinian civilians by Israeli occupation forces, and the holding of Israeli politicians accountable for crimes against humanity and other rights abuses.

While Corbyn has conceded that the two-state solution would be difficult to implement given the significant Israeli-backed illegal settlement activity in the West Bank, he remains a supporter of the widely-discredited proposal as "all that's on offer." To his credit, though, Corbyn is on record noting that the fundamental “key” to addressing the root of the tragedy is ensuring the Palestinian people's right to return to the homes and lands from which they were ethnically cleansed during the Nakba of 1948 and the 1967 Israeli onslaught and annexation of remaining Palestinian territories.

While not a supporter of the Boycott, Divestment and Sanctions (BDS) movement's call to reject Israeli cultural, academic and economic products – a call seen as "reasonable" by two of five Brits from across the political spectrum, according to recent polls – he has called for “targeted” boycotts of universities involved in weapons research and the boycott of goods produced in illicit Israeli settlements in the Occupied Territories. Despite that, the Labour manifesto fails to call for sanctions on the Israelis.

RELATED:
Jeremy Corbyn Has a History of Support for the Latin American Left

Corbyn also advocates engaging in diplomacy with regional players such as Palestinian Hamas and Hezbollah of Lebanon, noting their significant support base and the fact that, whether Tel Aviv likes it or not, they represent mass popular opinion in their respective countries.

Predictably, Britain's right-wing – including many among the aggressively pro-U.S. Blairite New Labour clique – frantically sought to brand Corbyn's humanitarian support for the Palestinian people as a reflection of “the new anti-Semitism,” a slur commonly applied to any stance opposing Israeli war crimes and impunity to the slightest extent.

Ultimately, British voters seemed unmoved by alarmist calls denouncing Labour as a bigoted party. This was proven when people from all walks of life – including British Jews – turned out in droves to support the party's program and its candidates.

Labour's victory came in spite of the hyperbolic attacks on Corbyn, perhaps signaling the shifting winds of public opinion regarding the Israeli occupation.

However, the longer-term question of whether an ascendant Corbyn will be able to sideline or dislodge U.S.-loyal and pro-Zionist layers within his own party – or resist the temptation to compromise with the Israeli lobby for the sake of political expediency – remains yet to be answered.