The first round of the presidential elections in Colombia will be held on May 27. If no candidate gets more than 50 percent – the most likely scenario – a second round will take place on June 17. 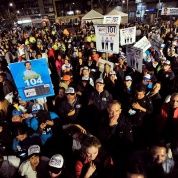 As for the legislative elections on March 11, the Democratic Center party is leading the polls with 20.1 percent of the votes, which would give them about 20 seats in the Senate.

If none of the candidates get more than half the valid votes, a second round will be held in June.

Competing to lead the right-wing coalition are:

Ivan Duque - to be defined on Sunday (Centro Democratico)

Senator Duque (2014-2018) benefits from the support of right-wing hardliner and former President Alvaro Uribe. On March 11, he will be competing against right-wing candidates Marta Lucia Ramirez and Alejandro Ordoñez in order to define the candidate of a conservative coalition.

If he wins the vote, with the relative popularity of Uribe's ideas – for instance, the victory of the 'No' campaign in the 2016 popular consult against the peace agreement signed by the government and the rebels, Duque can hope for a good score in the polls and even possibly a victory in the second round. Despite his past as incumbent President Juan Manuel Santos' tax minister, Duque managed to reinvent his image as an ally of Uribismo, and the fight against the so-called 'Venezuelization' of Colombia.

Economically, he supports a neo-liberal agenda promoting the private sector and a competitive market.

His predecessor Oscar Ivan Zuluaga, Uribismo candidate for the 2014 presidential elections, was Santos' contender in the run-off vote.

She participated in the 'No' campaign against the peace agreement, as well as in the negotiations that followed with the government in order to amend the text.

She obtained about 2 million votes in the 2014 presidential elections when she was running for the conservative party.

Vice-president (2014-2017) in Santos' administration, Vargas is supported by the Radical Party and other conservative sectors. He is part of one of the oldest political dynasties in the country: his grandfather is former President Carlos Lleras Restrepo. He was known for his fierce opposition to President Pastrana's failed attempt to sign a peace accord with the FARC in the 1990s, which then contributed to bringing Lleras and Alvaro Uribe closer. Lleras supported Uribe's candidacy for the 2002 presidential elections and was re-elected senator as one of the leaders of the Uribismo movement.

He was the third-most popular candidate in the 2010 presidential elections for the Radical Party, and although he failed to survive the run-off vote, Santos appointed him as interior minister.

Nicknamed 'Colombia's Trump,' the former senator for the Conservative party and attorney general since 2009 is known for radical conservatism and is close to the Catholic sector. He has been one of the fiercest opponents of the FARC peace talks, and is often criticized for bending the rules in the interest of his own beliefs: he launched the process removing left-wing Senator Piedad Cordoba from her position; ousted Gustavo Petro as Bogota mayor, and removed Alonso Salazar, Medellin mayor  all three decisions later overturned in court.

Competing to lead the left-wing coalition are:

Gustavo Petro - to be defined on Sunday (Colombia Humana)

Petro, once a member of the now-defunct M-19 rebel movement, has been leading the polls despite smear campaigns from his opponents, especially on social media, alleging he would bring 'Castrochavismo' to Colombia. He’s well supported in Bogota (he was mayor of the capital between 2012 and 2015) and in coastal regions with marginalized populations that have been hit hard by decades of neoliberal policies.

In Bogota, he was praised for many social projects, including by Unesco for his education policies.

He was removed from his post by the inspector general for mismanagement of garbage collection and banned from holding office for 15 years, a ruling later overturned by the Inter-American Commission of Human Rights and Colombia's State Council.

He is one of the few candidates who have incorporated issues such as renewable energy and the environment, social justice and animal rights. With a strong anti-corruption discourse, he also made a point in proposing 'the Decency List': a legislative list of candidates with no experience in politics who have never been the subject of a judicial investigation.

Carlos Caicedo - to be defined on Sunday (Ante Todo Colombia)

A former militant with A Luchar, the political arm of guerrilla group the National Liberation Army (ELN), Caicedo was also a candidate on the list of the Patriotic Union, after the failed attempt at demobilizing rebels in which most of the candidates were assassinated by paramilitaries.

Compared with Petro's popularity, Caicedo – best known in the coastal city of Santa Marta, where he was mayor representing the Liberal Party – is unlikely win on Sunday and go on to represent the left in the presidential elections.

He was unfairly imprisoned for five years after being accused of embezzlement when he headed the University of Magdalena, ultimately being absolved by Bogota's Superior Tribunal.

De la Calle represents continuity with Santos' center-right economic policies, while supporting the implementation of the peace agreement with the FARC under the motto 'Peace on the way.'

In 2012, De la Calle was appointed official negotiator for Santos' government during the talks with the rebel movement. He had run in the 1993 presidential elections, but was defeated by Ernesto Samper.

More recently, he was implicated in the Panama Papers corruption scandal in connection with offshore company Davinia. He scored only 10 percent in the most recent polls.

Independent candidate Sergio Fajardo, a mathematician and former mayor of Medellin, self defines as a centrist and ran for the vice-presidency – along with centrist-green candidate Antonio Mockus – in 2010, but lost the run-off vote to Santos. He participated in the peace process as founder of the Peace Commission for the province of Antioquia.

The former senator (1994-2010) presented her candidacy for the Citizen Power movement on March 8 because it coincided with International Women's Day and women are an important part of her political project.

She was suspended as a senator on a 2010 judicial decision controversially initiated by Attorney General Ordonez, removing her political rights for 18 years because of alleged links with the FARC rebels, until the State Council overturned the sentence last year.

The human rights activist has spent most of her political career with the Liberal Party and claims to represent a citizen movement that doesn't identify with the traditional categories of right and left.

Her political program includes the fight against poverty, and the proper implementation of the peace accords signed between the FARC and the government. She contributed to the signing of a humanitarian agreement between former President Uribe and the FARC, which included the release of political prisoners.