Habitat III arrived in Quito, bringing with it a key question: How can we make our cities better? 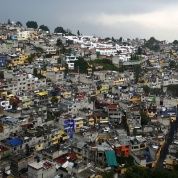 Traditionally we are all accustomed to hearing about our country’s GDP—unofficially the most useless figure ever—unless you live in an industrial city and work in the manufacturing sector. To understand the Gross Domestic Product’s most obvious shortfalls, we need only to look at the purpose it was developed for: measuring the U.S.’ national income in the time of war-fueled industrialization.

This means that while the GDP takes into account elements like consumer spending, imports and exports, it actually misses out on the most important area of a society: the well-being of its people. The GDP can grow due to reconstruction after absolute devastation like an earthquake or when someone buys 10 new TV sets on credit—but these things are not measures of whether communities are actually improving.

So how can we really measure the health of our cities and communities?

As put by Rolf Alter of the Organization for Economic Co-operation and Development at Habitat III, “Averages lie, prosperous areas hide the poverty of other areas. If you truly want to leave no one behind you have to fight against averages.” To really understand how a city’s health you need to crunch the big numbers.

We can put in place progressive policies, targeting the most vulnerable, the poorest, empowering local entrepreneurs, but just because there’s a hipster coffee shop on your corner doesn’t mean the next neighborhood over is doing as well.

The key factors that should be included are safety, health, income, environment, community, jobs, education, civic engagement, access to services, life satisfaction and housing. Once this data is collected local and national governments can really start to understand how populations are faring and how we can improve our cities. The crux is essentially data collection and analysis.

The largest obstacle to this is obviously the initial setup and investment. Despite 54 percent of the world’s total population living in cities, there is surprisingly little investment in urban planning and policies, which would put in practice these ideas of measurement of well-being and improvement.

Colombian economist Simon Gaviria Muñoz said, “(Data collection) starts with people. Take people in your municipality with no jobs or low-income jobs, this is an opportunity to employ people and you need large amounts of people going to collect data. Especially if you want it to be current and up-to-date.” This local approach can be taken on by municipal governments or local movements who want to have a clearer picture of the issues that their communities or cities face.

Another cheaper and more accessible approach for low-resource institutions is to use digital data from social media and search engines. When Colombia worked with Google analytics to analyze what people in the country were searching for, they found they could predict economic growth in real time with a 0.06 percent margin of error.

This is a small example of a trend for governments of all levels to embrace open data, expanding the playing field for citizens to build on this data too. Citymapper, an app that combines all transport information for cities with open data, is an example of how it can change the game. The long-term aim is to use these tools to create even bigger building blocks for our future cities, leaving no one behind.