Latin American leaders are increasingly aligning their economies with China, and the United States seems worried. 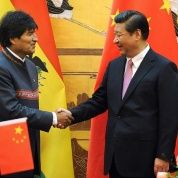 Chinese President Xi Jinping has pushed to integrate Latin America into the Belt and Road Initiative, and governments across America have firmed up infrastructure and resource deals with China.

Today, Chinese partnerships with Latin American governments and companies, to construct roads, hospitals, trains, and develop both renewable and fossil energy resources indicate to many an epochal shift that could see the United States left behind.

There is no doubt that the rise of a multipolar global economy has opened up new options for governments around the world who prefer not to tie themselves too deeply to the United States, with its long history of “big stick” unilateralism in foreign relations.

For many leaders, the Chinese model of foreign relations is a welcome breath of multilateralism and respect for sovereignty. China, unlike the United States, has not installed military bases in those countries it does business with, or intervened in their political systems.

Meanwhile, the first year of the administration of President Donald Trump has only seen the United States bolster its unilateral approach to foreign relations by imposing further sanctions on Venezuela, souring relations with Cuba against international opinion, pulling out of the Paris Climate Agreement, and attempting to bully its way through North American Free Trade Agreement, or Nafta, renegotiations.

LATIN AMERICA AND CHINA AGAINST THE MONROE DOCTRINE?

Secretary of State Rex Tillerson angered many during his recent tour through South America by praising the notorious Monroe Doctrine, saying that the policy that oversaw a century of U.S. intervention in the South is “as relevant today as it was the day it was written.” Seemingly unaware of the irony that many perceived, Tillerson proceeded to decry Chinese-Latin American relations as “imperial.”

OPINION:
China Is Most Promising Hope for Third World: Fidel

However, talk of “imperial powers” coming from Mr. Tillerson, has not carried much weight for peoples and leaders in the South that have consistently found themselves under the force of the North's “big stick.”

Cuba's state newspaper Granma quickly moved to condemn what they see as the “return of the Monroe Doctrine” under Trump, explaining that it is a reaction to a broader “geopolitical turn.”

“The geopolitical turn toward other emerging actors such as the Asian giant (China) and Russia hurts Washington's dream,” the paper said.

Latin American governments of various political tendencies have often praised the benefits of greater sovereignty and development that increased trade with China has resulted in.

Venezuelan Foreign Minister Jorge Arreaza, a vocal critic of U.S. interventionism against his country, said in December “Thank God humanity can count on the People's Republic of China to guarantee peace or at least less conflict.”

Bolivia's first Indigenous President, Evo Morales, has praised Chinese investments for not imposing extra conditions, unlike those of the United States and International Monetary Fund, or IMF.

“If we accommodate IMF loans, we would have to submit to privatization policies and lose our national heritage,” Morales said.

“The American empire does not want to see the presence of China and Russia (in Bolivia),” Morales said last year, like Cuba referring to a “geopolitical war” underway.

THE BOLIVIAN EXAMPLE: ARE GLOBALIZATION AND SOVEREIGNTY COMPATIBLE?

Bolivia is an epicenter of Latin American-Chinese cooperation. Evo Morales has visited China three times, and plans to do so again in 2018. Chinese partnership in Bolivia has assisted Morales in carrying out his vision of infrastructure development, with Chinese investments paving the way for the construction of hundreds of kilometers of new highways and phone lines to connect remote areas of the country, build up the economy and reduce poverty.

It was a meeting between Morales and Chinese President Xi Jinping that gave impulse to the planning of a bi-oceanic train, to cross the continent from the Atlantic to Pacific, significantly reducing transportation time for goods and people.

While China's Belt and Road Initiative has initiated a new period of rapid development efforts, some critics have pointed however to the presence of China in various extractive industries as evidence that China might just be offering more of the same to Latin America, echoing Rex Tillerson's designation of it as an “imperial power.”

Unfortunately, due to a colonial history that established a model of low-value-added export dependency, many Latin American countries, such as Venezuela, Ecuador, and Bolivia, have historically been dominated by the extraction and export of hydrocarbons or minerals.

This means that even after a progressive government wrenches itself from the grip of foreign political control, it is still confronted by the fact that the conditions for its development are deeply tied to the extraction and sale of one or two resources for volatile foreign markets. Overcoming this is a long and difficult task.

From his days as a Cocalero trade unionist to his presidency, Evo Morales has advocated for a model of development and foreign cooperation that respects both sovereignty and ecology. When his government re-nationalized the hydrocarbon industry in 2006, this freed up enormous revenues to put toward infrastructure and social programs, much to the chagrin of the United States and its corporate class who would prefer those profits line their pockets.

Whereas the United States has a history of opposing and intervening when Latin American leaders nationalize key resources, such as when former Chilean President Salvador Allende nationalized copper, China has never attempted to exercise political control over the Latin American countries it does business with, opening the geopolitical space for progressive leadership like Bolivia's to build global economic connections while bringing tangible benefits to the people.

As the world “pivots east,” many questions have yet to be answered. Is it possible to make economic globalization work for the people? Can a globalized economy be wrenched from the precedents of plunder and unilateralism set by the United States?