With international headlines reporting charges of corruption being brought against one elected official after another, a pattern is emerging: a few get indicted, while others go scot-free. 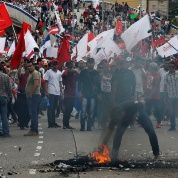 But who — or what — determines the difference?

For Marxist philosopher Friedrich Engels, that is of no consequence. Rather, the issue is capitalism. Writing in 1884, he says:

"In (capitalism), wealth exercises its powers indirectly, but all the more surely. On the other hand, in the form of direct corruption of officials, in the form of an alliance between government and stock exchange. (Capitalism and its political system) is what provides the splendid spoil for corruption and the plundering of the government to flourish."

According to Engels' argument, capitalism is intrinsically linked to corruption. Even more so, the right-wing element largely responsible for such fraud continues to revel in impunity.

From Latin America to the Middle East, Europe and beyond, right-wing politicians in capitalist states have been charged with crimes of fraud, bribery and extortion. Yet they continue to get away with it, even cementing their strongholds.

Coups and corruption: the case of Honduras

Following a fraudulent election, which prompted Hondurans to spill onto the streets in protest at the ruling party's fourberie, is the case of President Juan Orlando Hernandez.

Corruption has been the driving force in the ongoing presidential election: Hernandez is running for a second consecutive term precisely because of an unconstitutional 2015 vote to change the country's election laws.

The country's Supreme Electoral Tribunal (TSE) stands accused of favoring Hernandez and his right-wing National Party of Honduras (PNH), a move which prompted the ongoing protests, as well as a recount.

Four years ago, Hernandez' election campaign four years ago was simpy fraught: this time, with charges of embezzlement. His party reportedly siphoned off US$90 million from the Honduran Social Security Institute to pay for his campaign against candidate Xiomara Castro, the wife of former President Manuel Zelaya who was ousted during the U.S.-backed coup in 2009.

While he was president of the Honduran National Assembly, the PNH reportedly embezzled US$300 million from the social security system. While he did claim the party received US$150,000 in illicit funds, Hernandez ultimately accepted no responsibility.

Some 8,000 people stormed the streets of Tegucigalpa when the scandal broke in 2015, chanting the same slogan being heard on the streets today: "Fuera JOH! Fuera JOH!" (JOH out! JOH out!).

But JOH — that is, Hernandez — is very much still here, at least for now.

Since the November 26 election, the United States — quick to condemn alleged "election regularities" in "undemocratic" countries such as Venezuela, where 23 elections have taken place in the last 18 years — has actually praised Hernandez' administration for "fighting corruption and supporting human rights."

Last week, the government received a new U.S. State Department aid shipment. Elite U.S.-trained military police from the TIGRES and Cobras immediately seized it in a direct challenge to the status quo, the Intercept reports.

Maintaining the face of military occupation: the case of Israel

Honduras' armed forces are bolstered by Israel, too. All this while its own head of state is ensnared in a number of corruption scandals himself.

Case 2000 alleges that he tried to secure positive coverage in the Yedioth Ahronoth newspaper in exchange for axing circulation of the pro-Netanyahu Israel Hayom, which is backed by U.S. casino magnate and major political donor Sheldon Adelson.

Case 1000 may also involve, according to the Jerusalem Post, Netanyahu's establishment of a free-trade zone near the Jordanian border. And then there's his buying of shares in Channel 10, an Israeli TV station of which Milchan is partial owner.

Although formal charges have yet to be brought against Netanyahu, he may have little to fear: he has the fulll backing of his right-wing Likud Party, which is putting forward legislation to protect Netanyahu from possible indictment. The draft laws would block Israel's police from publishing findings and issuing recommendations to the prosecutor's office on indictments related to public officials.

As many as 20,000 people demonstrated in Tel Aviv last week against the legislation, with 10,000 more demonstrating again on Saturday, chanting "Bibi to prison!" during the second "March of Shame."

In the shadow of the Franco dictatorship: the case of Spain

Across the Mediterranean sea is yet another right-wing government embroiled in corruption: one of the largest cases in modern history. The ongoing decade-long investigation into Spain's ruling People's Party (PP) has already branded it a "criminal organization."

So far, 37 members of the PP have been tried on charges of organized crime, falsifying accounts, influence-peddling and tax crimes in the "Gurtel" case — named after the supposed mastermind of the corruption ring, Francisco Correa, whose last name means "belt" in Spanish.

He styled himself after fictional mafia godfather Vito Corleone: greasing palms, laundering money and enriching himself through public contracts. First detained in February 2009, he was released on bail three years later. However, in 2017 he was sentenced to 13 years in prison by a court in Valencia for setting up a kickback scheme and rigging public contracts.

The PP as a whole stands accused of using a parallel system of accounts in order to siphon bribes into "box B," which was handled by the party's former treasurer Luis Barcenas, among others.

"An organization that has operated for a long time, which has penetrated to very deep levels in public administrations until it has become parasitic and absorbed the capacity of a political leader to allocate and manage public funds… that is the concept of corruption in its purest form," said Manuel Morocho, chief inspector of Spain's Unit of Economic and Financial Crimes (UDEF).

In July, Spanish Prime Minister Mariano Rajoy, also of the PP, appeared as a witness in the trial without being accused of any wrongdoing. Last month, however, Morocho testified to the contrary, insisting there is "circumstantial" evidence Rajoy has been involved in criminal activity.

Differences Between Venezuela Fighting Corruption and the US

The possible grounds for Rajoy's impeachment have mostly been ignored by the Spanish media, the issue of Catalonian independence serving as a useful distraction from the scandals, reminiscent to many of those under the Franco dictatorship.

But as the world unites to demonstrate against capitalism and corruption, the smokescreens that once obscured such practices may yet be wearing thin.

Trials against elected officials are dragging, but the sheer number of people protesting on the streets serves as a poignant reminder that the public is no longer prepared to tolerate corrupt governments.