The first Mexican Indigenous radio station in the U.S. hopes to end isolation, inform and empower their community in Southern California and beyond. 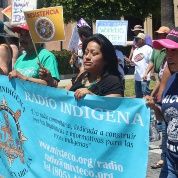 While the city of Oxnard in Ventura County, California, bills itself as “The City That Cares,” this isn't always the case.

Built on coastal plains once inhabited by the Chumash people before Spanish missions and European settlers cleared the region of its original inhabitants, the city — named after a 19th-century sugar magnate from Europe — has always been a “company town,” dominated by the agricultural-industrial complex and fueled by the exploitation of immigrant labor.

Surrounded by sprawling fields of strawberries, onions, celery and other year-round crops, and connected to major highways, ports, and freight links, “The City That Cares” revolves more around commerce and the outflow of agricultural products than around its people.

GALLERY:
Migrant Farmworkers in US Continue to Toil Under Trump

As such, the city and its surrounding region's truck-worn roads and heavy-handed police get most of the city's resources and attention while the people who live there — an estimated 210,000 residents, mostly working class — get short-changed.

This is especially true for the nearly 75 percent of residents classified as “Hispanic or Latino” — a bureaucratic term encompassing not only Latinos and Mexican-Americans, but also the diverse community of immigrants from Mexico, a country with 68 distinct nationalities and 62 native languages. Among this group are about 20,000 Indigenous peoples from southern Mexico's multiethnic Oaxaca and Guerrero states, most of whom are employed as farm workers in Ventura County's pesticide-laden campos.

“There is a large population of Mixteco, Zapotecos and Purepecha in Ventura County, many of whom are monolingual in their Indigenous language,” Arcenio Lopez told teleSUR.

Lopez, a former farmworker, is the executive director of the Mixteco/Indigena Community Organizing Project MICOP, a nonprofit organization that provides services and support to the region's Indigenous migrant community.

“The biggest obstacle for the lack of services and media is the language barrier,” explained Jose Alamillo, a Chicana/o Studies professor at nearby California State University Channel Islands.

MICOP has tried to address the huge service gap faced by Indigenous communities while also providing cultural programs including the annual “Night in Oaxaca” and Oxnard Guelaguetza festival and events marking Dia de Los Muertos, Christmas, and other holidays.

Inspired by advice by Hugo Morales, the founder of Fresno-based public radio station Radio Bilingüe, the group decided to take their cultural programs to a new level and create a radio station.

Equipped with meager resources and staffed by 15 amateurs — many of whom were farm workers and day laborers — the station began “building pride, promoting unity and ending isolation” by bringing Indigenous farm workers popular regional music, national and international news, and information about immigrants' legal rights.

“We want to provide critical community information to our Indigenous community in Ventura County as a way of building healthy and empowered communities — creating spaces for honest and truthful conversation about embracing and owning our Indigenous identity, language, history ... learning to share our truths with our community,” Lopez explained.

While Oaxaca was the birthplace of President Benito Juarez, a Zapotec Indian and national hero who led the resistance to French occupation and the dominance of the church, Indigenous communities in the Pacific coast state have long faced government neglect or outright hostility, which some historians trace back to the tributary empire of the Aztec Triple Alliance.

Generations of poor land-use practices were enforced first by the Spanish colonizers and then by the Mexican government, exposing thousands of years of ecologically sustainable agrarian practices to a steady process of erasure. The result has been massive soil erosion and the desertification of landscapes that once served as a lifeline for rural folk and the 1.6 million-strong Indigenous population who relied on communal or ejido farming.

Another shock to hit the people of the region was the 1994 implementation of the North American Free Trade Agreement, or NAFTA, which sounded the death knell for much of the country's agricultural sector. Destroying Mexico's protectionist barriers and farm subsidies, the treaty displaced small farmers and campesinos while transforming Mexico into an importer of processed products and cheap GMO-laden fruits, vegetables and grains.

“Two factors are forcing the Oaxacan people to leave their hometowns: economic and political,” Alamillo noted. “Poverty is still rampant throughout the state of Oaxaca ...(while) political turmoil has also driven Indigenous groups out of their village (who then) can't return to visit,” he added, noting the inter-communal strife, paramilitary violence and state repression that has particularly impacted such peoples as the Triqui.

Faced with such hopeless conditions, Indigenous workers and families were forced to make a dangerous trek to the north — where agribusiness welcomed low-cost undocumented immigrant laborer while failing to grant them social rights or protections.

The situation was worsened by discriminatory attitudes within the Mexican community that led to self-hatred, internalized racism and a generalized sense of despair.

“They are often referred to as 'Indios' or 'Oaxaquitos' in a pejorative manner by Mexican American and other Latino/as. This racism was inherited from Spanish colonization and continues to this day,” Alamillo explained.

“Yes, the Indigenous community has encountered racism in Oxnard and Ventura County, however our experiences with racism stem back to Mexico,” Lopez confirmed.

“We hope through Radio Indigena that we provide our community with something that they can identify with and that through this medium they can see value in their language and culture — in doing this, we hope to strengthen their Indigenous pride and build community,” he added.

On the FM Dial and Worldwide

Greeted by overwhelmingly positive support from listeners in Ventura County as well as Nevada, Washington, New York, and Puerto Rico, Radio Indigena recently achieved the milestone of being the first entirely Indigenous-led public radio station in the United States to broadcast on the FM radio dial — an important channel for communicating with working-class immigrants.

“In March of this year, our community was really excited to be able to listen to their Indigenous languages in FM,” Lopez explained.

While the station's signal is largely confined to the western part of the county, audiences can tune in online through MICOP's website, a Radio Indigena smartphone app and by dialing up a number that broadcasts the station by telephone.

With 25 DJs and 40 hours of original weekly programming in Spanish, Mixteco, and Zapoteco, the station is making strides in sealing the information gap that has led to the exclusion and isolation of their community, with programs covering a range of topics including cuisine, tradition, advocacy, community concerns, youth issues, mental health and domestic violence.

“We are frequently told that Radio Indigena is unique because of the languages we speak and because of the amount of information we provide to our community,” Lopez said.

While Radio Indigena is helping to fight alienation and connect communities with one another, a sense of fear has grown among immigrants that the federal government, equipped with the Trump administration's merciless policy directives, will launch new attacks on undocumented communities.

“I see this getting worse,” Alamillo warned. “Trump has already stepped deportation efforts and now has introduced proposals to cut legal immigration by half, so the fact that Indigenous communities have large numbers of undocumented members puts them at high risk for deportation.”

Indeed, Trump's RAISE Act — which relies on a stringent point-based system favoring high income-earners and English-proficient immigrants — would bar most undocumented farm workers from gaining green cards. And while the bill isn't expected to pass muster with the Senate Democrats or Republicans, the community fears that the chance of finding their storied “pathway to citizenship” is growing more difficult by the day.

RELATED:
In ICE 'Targeted' Raids, 70% of Arrests Were Collateral Victims

Meanwhile, growers are increasingly relying on the H-2A temporary agricultural worker program, which allows employers to bring nonimmigrant foreign workers to farms for up to 10 months. Labor advocates have compared the H-2A program to indentured servitude, modern-day slavery and the notorious Bracero Program that lasted from 1942 to 1964. In Oxnard, many of these H-2A contract workers are recruited from Indigenous southern Mexican communities in San Quintin, Baja California, or directly from Oaxaca. As growers increasingly depend on H-2A guest workers, some fear that expanded enforcement targets will target the undocumented workforce.

In anticipation of these threats, community organizations have upped the tempo of “Know Your Rights” training sessions and programs, discussing next steps in building and strengthening their communities.

“Radio Indígena is powered by our volunteer Indigenous leaders to inform and educate our Indigenous immigrant community on a variety of issues. This information is crucial under the Trump Administration, as we provide it in our oral Indigenous languages as well as in Spanish,” Lopez said.

“Radio Indígena is actively creating Public Service Announcements that inform our community about their rights when interacting with immigration officials,” he continued. “For example, we developed a PSA in Mixteco and Spanish where we inform our community about what they can do when ICE agents knock their doors or if they are stopped on the street or if they go through an ICE checkpoint.”

Lopez is confident that no matter what the future brings, the radio station will remain a vital resource for his community.

“We envision a self-sustainable community radio station led by members of the Indigenous community, a tool of education and resistance under the current administration, a way to decolonize our mindset and continue to push for a more just world.”

Listeners can tune in online or through the Radio Indigena app for iOS and Android. In Ventura County, California, the station can be found on 94.1 FM, 6 a.m. to 8 p.m., Pacific Time. The station is also available through phone by calling +1 (605) 475-0090.