Faced with an intractable judicial system that has defied Brazil's constitution and a UN Human Rights Committee ruling, former Brazilian President Luiz Inacio Lula da Silva, the lead choice in the presidential election, has, from a prison cell in Curitiba, transferred his candidacy to his vice-presidential running mate, Fernando Haddad. 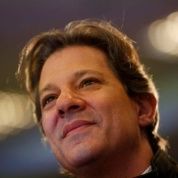 With the political baton having been passed on, teleSUR examines the new Workers' Party (PT) candidate for the highest political seat in the land.

Haddad is the son of Lebanese immigrants to Brazil. He was raised in the Planalto Paulista neighborhood of Sao Paulo, assisting his father, Khalil Haddad, at his textile and fabric wholesale store during his youth.

Accepted to law school at the University of Sao Paulo, Fernando Haddad, as a student, participated in the Direitas Ja movement against the military dictatorship and in favor of free elections for the Brazilian presidency.

Receiving his law degree in 1981, he also holds a master's degree in economics and a doctorate in philosophy.

Haddad served as minister of education from 2005, during Lula's presidency, to 2012, when Dilma Rousseff was serving her first term.

His department established the Education Development Plan, which allowed the department to intervene in educational matters from nursery school to post-graduate study. It also implemented the Basic Education Development Index, enabling the ministry to develop annual strategies for each municipal and state school, as well as identify and supply schools in need of improved distribution of educational materials.

In early September, Lula conferred his presidential candidacy to Haddad. The highly charged political climate was replete with deja-vu as the former mayor of Sao Paulo was also accused of corruption, money laundering and forming a criminal organization.

Haddad's legal defense team released a public statement saying there is no basis for charges and that Haddad was surprised by the accusations. This is the second time the public prosecutor of Sao Paulo has brought charges against Haddad in the past week, his laywers said.

On August 27, the public prosecutor alleged Haddad had committed administrative misconduct. According to Wilson Tafner, the prosecutor in the case, the former mayor of Sao Paulo had "benefitted from gains via illicit advantages," and enriched himself through indirect, illicit means stemming from payments of debts for his mayoral campaign in 2012.

Haddad has also been accused of administrative misconduct in relation to a series of irregularities in the construction of a bicycle path in Sao Paulo, according to UOL. He has denied all charges.

Brazil's past four presidential elections have been won by PT candidates. Lula was elected in 2003 and 2007 His sucessor, Dilma Rousseff, won the presidential elections in 2011 and 2015. For this reason, many believe the only way for a conservative, right-wing administration to come to power would be to eliminate Lula from the presidential campaign altogher. The move was accomplished via judicial discretion, following the contentious impeachment of Rousseff.

The latest Vox Populi and the Unified Workers Union (CUT) poll, which was released on Sept. 13, gives Fernando Haddad the lead in the presidential race ahead of October's general election. It shows the PT candidate with 22 percent support among voters. His main rival, Jair Bolsonaro, of the Social Liberal Party, holds 18 percent of voter support.