Bolivia's Day of the Sea, observed every Mar. 23, commemorates the nation's loss of sovereign access to the Pacific Ocean to Chile during the War of the Pacific (1879 - 1884). This year's anniversary coincides with oral hearings in the International Court of Justice (ICJ) in the Hague, between March 19 and 28, during which Bolivia and Chile will present arguments to settle the 139-year-old territorial dispute. 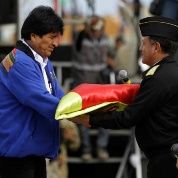 RELATED:
Bolivians Mobilize to Demand Sovereign Access to the Sea

After the hearings in the 'Obligation to Negotiate Access to the Pacific Ocean' case, the ICJ will give its final ruling, which is incontestable and binding.

Bolivia's sea claim isn't just a technical and judicial matter; it's also deeply political because it seeks to amend more than 100 years of deprivation and dispossession stemming from Chile's submissiveness to corporate greed.

When South American liberator Simon Bolivar established Bolivia in 1825 after freeing it from Spanish rule, he claimed access to the sea for the newly-liberated nation. In 1866 and 1874, via two border treaties, Chile and Bolivia agreed on national borders that ratified Bolivia's sovereign access to the Pacific Ocean.

However, in 1878 the Bolivian state imposed a tax on the Antofagasta Nitrate & Railway Company (CSFA), despite having agreed in the 1874 Boundary Treaty that it would not levy taxes on Chilean people or companies for a period of 25 years.

When the CSFA refused to pay, Bolivia announced the seizure and auction of CSFA property, which prompted the Chilean invasion and occupation of the then-Bolivian port city of Antofagasta. The War of the Pacific was a war of conquest waged by the Chilean state to protect the profit-making capabilities of the CSFA.

What followed was a five-year war in which Chile ultimately defeated the Peruvian and Bolivian armies, gaining control over territory rich in both guano and sodium nitrate, sought-after commodities by the world's central economies and former colonizers for their value as fertilizers and as components in explosives.

In 1904, Chile and Bolivia signed the Treaty of Peace and Friendship, in which Bolivia accepted the loss of 400 kilometers of coast and 120,000 square kilometers of territory, leaving the nation effectively landlocked. This treaty is Chile's main defense against Bolivia's claim in the ICJ.

According to Chile, the borders were settled in the 1904 treaty, which also grants Bolivia non-sovereign access to ports in Arica and Antofagasta. Bolivia, however, says it signed the treaty under duress and that later proposals by Chile, which included a land-swap to return Bolivia's access to the sea, established something called 'rights of expectations.'

In 1975, during Augusto Pinochet's dictatorship, Chile entered into negotiations with Bolivian dictator Hugo Banzer and proposed an exchange of territory that would provide Bolivia with a "corridor to the sea" and an adjacent maritime zone.

Both governments were already working together on the CIA-sponsored Plan Condor, under which South American dictatorships coordinated efforts to hunt down, torture and kill anyone linked to left-wing ideology and subversion, but despite ideological accord, the negotiations fell through.

After years of unsuccessful bilateral negotiations with Chile, in April 2013 the Plurinational State of Bolivia filed a lawsuit in the ICJ requesting the Court oblige Chile to enter negotiations over access to the Pacific Ocean.

A year later, on Apr. 15, 2014, Bolivian President Evo Morales personally presented written arguments to support the lawsuit. In 2015 Chile questioned the ICJ's jurisdiction, but the court overwhelmingly voted to reject Chile's objection over jurisdiction, ruling it would hear Bolivia's case.

The dismissal of Chile's objection was Bolivia's first diplomatic and legal victory. The ruling recognized that Bolivia gained its independence with a coast on the Pacific Ocean and that the 1904 treaty does not address the matter of Chile's obligation to negotiate sovereign access to the sea. The court also recognized and reproduced Bolivia's historical arguments.

As Bolivians celebrated the ruling, then Chilean President Michelle Bachelet issued a declaration: "The court's ruling does not affect our territorial integrity, it only establishes its jurisdiction to hear Bolivia's complaint."

With the battle over jurisdiction lost, in 2016 Chile submitted a counter-memorial reiterating that it has nothing to negotiate with Bolivia. This opinion is far from indisputable.

During the 1980s, the Organization of American States (OAS) approved a resolution deeming Bolivia's claim a hemispheric issue and recommended the two countries "begin negotiations towards granting Bolivia a free and sovereign territorial connection to the Pacific Ocean."

Since then, countries of the Bolivarian Alliance for the Peoples of Our America (ALBA) have repeatedly declared that Bolivia's claim is justified in historic fact.

Within Chile there are also voices supporting Bolivia's right to sovereign access to the Pacific Ocean, recognizing the destitution that followed the military invasion in the 19th century.

Perhaps there is no clearer voice than that of progressive and left-wing former President Salvador Allende, who in 1973, before being murdered by Chile's military commanders, declared: "The time has come to repair a grave injustice: Chile has a century-old debt and we are willing to embark on a historical solution. Bolivia will return to the Pacific coast with sovereignty. We ask nothing of Bolivia's working people, we want only to repair the cruel dispossession it has been a victim of."

Allende, like Bolivar and Hugo Chavez, was a dedicated supporter of Latin American integration in order to address shared threats, but this remains an unlikely scenario so long as Bolivia is denied sovereign access to the Pacific coast.

On the eve of the final allegations, after thousands of Bolivians mobilized to unfurl a 200-kilometer symbolic banner demanding access to the sea, Chilean President Sebastian Piñera reiterated his unwillingness to recognize Bolivia's claim.

In an interview on Mar. 15, he said: "Chile will not lose sovereignty, territory or sea," and vowed to oppose the "grave injustice."

Chile's elite has benefitted from the annexation of Bolivian land through the exploitation of guano, sodium nitrate, copper and most recently lithium. The importance of the profits extracted from Bolivia's former territories continues to outweigh the urgency of Latin American integration, and the need to be coherent in respecting the post-colonial principle that military conquest does not grant the right to territory.