Bolivia faces general elections in November 2019 and primary elections to determine each party's presidential and vice-presidential candidates in January 2019. The parties have already handed in their list of registered militants and are formalizing alliances this week. 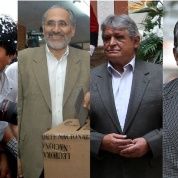 Leftist president Evo Morales has governed since 2006, winning 3 elections. Bolivia is now the fastest growing economy in the region and has been for some time. Will Bolivia follow Brazil, Argentina, and Ecuador in the regional shift to the right?

So far, all the leading opposition candidates, Carlos Mesa of the Revolutionary Leftist Front, Victor Hugo Cardenas of the Solidarity Civic Unity, and Jaime Paz Zamora of the Democratic Christian Party have been either former presidents or vice-presidents. All during Bolivia's failed neoliberal period. Mesa and Cardenas served as VP during the infamous presidencies of Gonzalo Sanchez de Lozada, who is responsible for violent privatization attempts and repression.

Paz Zamora was a close collaborator of former dictator Hugo Banzer, assisting him when he re-entered Bolivian politics.

In Bolivia, the right-wing has been unable to produce new leaders or to form a unity in order to face Morales in the upcoming elections. They’re forced to rely on the ghosts of a bygone era, implicated in the country’s deepest economic and social crises. Caudillos like Doria Medina and Mesa have long believed that public office is their personal right.

This is why, according to some political analysts, they will fail to unite despite no substantial political or ideological differences between the candidates.

Evo's opposition had been united under the umbrella of “Bolivia Dijo NO” (Bolivia said no) in reference to a 2016 referendum on re-election limits. Morales lost the referendum but in 2017 Bolivia’s highest court struck down limits on re-election, paving the way for President Morales to run for a fourth term in 2019.

In that context, with Morales running, opposition parties have been urged to unite in a single candidacy ahead of the primary votes. However, the coming primaries have only revealed that the right is still dominated by the old families and interests that brought the country to ruin before Evo was swept to office in 2006.

The Runners and Riders

Carlos Mesa is so far Morales' leading rival. A former Vice-President and President, he governed immediately prior to Evo during a period of institutional and economic collapse.

First as VP to Sanchez de Lozada, or ‘Goni,’ the President who fled by helicopter to Miami after the economic crisis and ‘Black October’ massacres. Mesa was a key part of Goni's political campaign. He contracted right-wing United States-based public relations companies to sell neoliberal ‘shock doctrine’ to an unwilling and unconvinced people in resistance. After political marketing failed, bloody repression followed as over 70 protesters were killed during demonstrations against privatization, some of them were shot by the army from helicopters that flew over unarmed crowds.

After Goni fled, Mesa took power, pledging to not carry out repression. His commitment to privatization measures earned him a short term in office. In an angry resignation speech, he ranted against the then union leader and activist Evo Morales, criticizing his proposal to nationalize natural resources.

Mesa had believed the World Bank, U.S., and Spanish governments that nationalization was impossible. In the same speech, he expressed his frustration with public workers, arguing they were only being paid because he had "begged" the IMF for the money.

Fast forward 13. Mesa posts a YouTube video announcing his candidacy to the presidency.

No media was present. In his announcement, he said he’s was running because Evo "represents the past" and he was the embodiment of the future. He has been reluctant to form alliances, too many old figures would simply be too toxic. So far he has allied with the uncontroversial centrist and mayor of La Paz Luis Revilla but remains with little political and policy definitions and with no base in the eastern part of the country.

The other two candidates are far away from reaching double-digit figures.

RELATED:
Bolivia's Evo Morales: 'Capitalism Will Divide, Steal From Us'

Victor Hugo Cardenas, former VP during Goni’s first term in office, during a period of rapid privatization of state companies. He was the first Indigenous VP and a prominent representative of a neoliberal identity politics that has tried to marry Indigeneity with neoliberal austerity.

He’s running in an alliance with a coalition of activist groups of mostly far-right "citizen's platforms." The largest of these is a group called “Las Calles,” which has formal and financial links to Brazil's recently-elected president Jair Bolsonaro.

Jaime Paz Zamora presided over a period when inflation ran at over 2,000 percent.

Samuel Doria Medina is one of the figures that best symbolizes the strategic and political failures of the Bolivian right. He has tried and failed to be elected three times now, yet he refuses to step aside and let others within his party stand.

An oligarch who owns a cement and hotel empire, as well as the Burger King and Subway franchise in the country. After being rejected by the other sections of the opposition as too toxic, he’s building an alliance with Ruben Costas, the separatist mayor of Santa Cruz, responsible for almost plunging the country into civil war in 2009.

In the face of this hapless opposition, Evo Morales has found it easy to win elections. In 2014, after eight years in power, Evo cruised to victory with over 60 percent, nearly 40 points ahead of his nearest rival.

However, the political landscape is more hostile this time around. The shift to the right in Latin America has emboldened right-wing grounds across borders.

The fact Evo is running for a third term after rejecting the results of a popular referendum has taken a toll. The media campaign against the left is replicating the smear campaign against the Workers' Party (PT) in Brazil, magnifying corruption scandals to present them as a staple of progressive administrations while turning a blind eye to corruption cases that affect right-wing politicians like Mesa, who is implicated in the Car Wash Odebrecht corruption network.

RELATED:
Evo Morales at UNSC: US, Trump Not Interested in Democracy

Another similarity with Brazil has been the torrent of fake news on social media, including a story about the EU blacklisting Evo personally as a drug trafficker.

Despite the difficult terrain, it is still likely that Evo will win in 2019 due to the economic bonanza the country has witnessed and the opposition's inability to form a united front.

Bolivians will have to choose between two types of continuity. One of privatizations, austerity, economic crisis and repression that characterized the 1980s, 1990s, and early 2000s or a fourth Movement Towards Socialism (MAS) government, which has proven nationalization and poverty reduction are possible without hampering economic growth.

The nationalization of strategic sectors, like gas, telecommunications, and utilities has provided the government the revenue necessary to launch massive social programs and expand infrastructure.

Even now that commodity prices are low, the economy is still growing at a faster pace than anywhere else in South America, including neoliberal Colombia and Argentina, while boasting the largest foreign-exchange reserves as a guarantee against devaluations and possible inflation.

Evo’s party is also by far the best organized for these elections. They registered over 1 million supporters for the primaries while opposition parties are in the tens of thousands. This is partly because MAS isn't a traditional party but rather a coalition of social movements, including Campesinos and trade unions, who seek participation in structures of power and policymaking, forming what they refer to as a "popular democracy."

The January primaries will give an indication of the balance of power. For now, according to IPSOS poll, Morales has a 14-point lead over Mesa but remains far from a first-round victory.