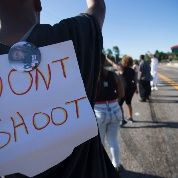 In California, where Latinos have surpassed the white population, they are faced with the problem of how to publicize and fight against police killings.

RELATED:
6 Latinos Killed by US Cops This Week—and Media Ignored It

Laurie Valdez's partner was shot twice in the back by San Jose, Calif. police officers in 2014. She said she was denied the video footage, which the force kept under gag order.

“My son had to see his father in a casket sent to Mexico to be buried — there was no place here,” she told teleSUR. Josiah was two years old back then and now acts up in preschool, still traumatized. Based on patterns well-documented with Black children, Valdez sees him falling straight into the school to prison pipeline.

“It’s not a journey (the killing of a loved one) that any family should have to walk alone,” said Valdez, who founded the anti-police brutality group Justice for Josiah to support him and other children suffering from the trauma of losing a parent without cause or consequence.

On July 4, 2016, 19-year-old Anthony Nuñez was shot in front of his San Jose home from about three houses away. Police said that he was carrying a gun and was suicidal.

His family said that two officers shot him, did not allowed anyone to go console him while he was still alive and then left his body where he fell the entire afternoon and night, without trying CPR or calling an ambulance. A bullet left a hole right under their doorbell, for every visitor to remember the shooting.

Valdez visited Nuñez’s family and was not surprised at the discrepancy between their story and the official one. She said that the San Jose police department is notorious for being discreet after shootings and warping the narrative to defend the killings as cases of police self-defense or victim suicide.

The police write-up was predictable: like the defense of Officer Darren Wilson who killed Michael Brown, George Zimmerman who killed Trayvon Martin, or Daniel Pantaleo who killed Eric Garner, “the police officer is always the victim,” said Valdez.

The few running lists of national police killings make two things are clear: Native Americans and Black people are killed by police at a visibly disproportional rate, and an accurate count for Latinos is still lacking, including Black Latinos.

Official reports do not always include the category “Hispanic,” and people often check their own demographic box, meaning that any full count would require a guessing game. Deaths at the hands of immigration and customs officials and border patrol—both law enforcement officials with notorious reputations for their handling of migrant cases—are not systematically kept, which by all accounts would be overwhelmingly Latin American victims.

RELATED:
Unity: A Criticism from Son of Baldwin

Gloria Hernandez has been organizing with the grassroots group Stolen Lives for decades and has made it her mission to collect a full count of Latinos killed by police in Fresno, Calif. When the ACLU was not interested in helping — until a white person was beaten by police — she decided to file her own requests directly with the police. She told teleSUR that the department questioned her for three hours, demanding to know who was behind her project.

Valdez decided not to rely on police records, and instead consulted the Chicano archive of La Raza Unida. Even that list, compiled by the Latino community in San Jose, was incomplete. People are still telling her about names that she missed, she said.

The 2010 census shows that about one-third of the San Jose population is Latino, and about 40 percent is Latino in Fresno. Both Hernandez and Valdez said that Latinos represent a high proportion of police killings in these areas, up to double their total population. Most were unarmed, some were shot in the back, some with several bullets. Some cops’ names appeared up to five times, but not one was indicted.

Besides noting that the city invests “big money” in protecting the police department, Valdez said that Latinos are not likely to bring the cases to light with public protests or lawsuits because families fear deportation and cannot afford the attorney bills.

Francisco Romero, an organizer with Todo Poder al Pueblo and Union del Barrio in Oxnard told teleSUR, “You don’t call the police to come and help. You don’t trust the police." He said that many immigrants are used to entrenched police corruption and violence in their home countries, and that the U.S. “war strategy” of heavily-militarized police increases their fear of law enforcement. It doesn’t help, he said, that Latinos are seen as non-citizens or second-class citizens.

Oxnard has one of the highest Latino populations in the country — about 70 percent. Many have joined the police force and the military, attracted by their state-funded benefits and protections, and many dress their houses with the U.S. flag to help make the case for their citizenship. The police killings, though, are a constant reminder of the reality of being Latino in the U.S.

IN DEPTH:
Police Terror in US

When Romero’s group first started marching against the shootings, sending press releases ahead of schedule, local media did not show up. With time, as they organized community events like a people’s tribunal against police brutality, the topic was not only of interest to the media, but also became “a kitchen-table dinner discussion.”

Oxnard’s concentrated network has been able to reach a wide audience, but Fresno, whose Latino population is dispersed across fields and long stretches of highway, has had a tougher time rallying the same numbers. It also lacks access to pro-bono lawyers, who tend to be based in bigger cities.

Despite the practical hurdles, Hernandez said that Fresno still has a decades-long tradition of organizing Latino, Black and Asian communities against police brutality. The recent spike in organizing sparked by Black Lives Matter has changed little about the way the police treat protesters, she said. Just as before, people of color have been cited for disruption far more often than white people, even more than those waving the confederate flag and shouting, “White lives matter.”

“It’s made very obvious and clear when a white assailant with weapons is approach by law enforcement in a totally different fashion than they approach brown people or Black people,” said Romero. He said it is essential to hold discussions with groups like Black Lives Matter to develop long-term strategies against police violence.

As Hernandez, Romero and Valdez rally behind the national slogan “Black Lives Matter,” the three said that they will continue to bring up the local threats to brown lives. Linking the struggles, they said, will only strengthen the solidarity needed to change the daily reality for Valdez’s son Josiah and his classmates.