Between April 17 and 19 of 1961, a force of Cuban mercenaries, led by the U.S. Central Intelligence Agency tried to invade the Caribbean nation of Cuba. Within three days the attempt failed disastrously, with over 100 invaders dead and over 1,000 captured. Fifty-five years later, this historical event remains a sore point in hawkish cold war narratives. Cold warriors and right-wing hardliners in the U.S. still see it as an affront and humiliation, which demands retribution and redress. However, for progressives and anti-imperialists all over the world, the mention of the “Bay of Pigs” — know in the Spanish-speaking world as Playa Giron — evokes joy and celebration: The United States, an empire accustomed to imposing itself even in the farthest corners of the world, could not prevail and enforce its will on an island country 90 miles away from its shores. The empire could be defeated after all. 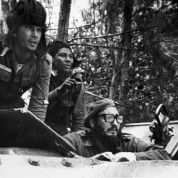 The invasion took place in the first months of the John F. Kennedy administration, but it had been conceived and planned under the previous presidency, that of Dwight Eisenhower. In January 1959, Cuban dictator Fulgencio Batista was overthrown by a popular armed revolt led by Fidel Castro, a development that would fundamentally change Latin American politics and U.S. Latin America policy ever after. Before the year ended, the consensus in Washington, D.C. was that the revolutionary changes taking place in the new Cuba could not be allowed to continue. In March 1960, President Eisenhower approved top-secret operation JMARC to overthrow Castro.

U.S.' Version of the Bay of Pigs Operation

In March 1960, President Dwight D. Eisenhower directed the Central Intelligence Agency (CIA) to develop a plan for the invasion of Cuba and overthrow of the Castro regime. The CIA organized an operation in which it trained and funded a force of exiled counter-revolutionary Cubans serving as the armed wing of the Democratic Revolutionary Front, known as Brigade 2506.”

IN DEPTH:
US Blockade on Cuba

“The Eisenhower administration and the CIA had decided in late 1959 that Fidel Castro was a tool of Communism and an ally of the Soviet Union,” according to the CIA’s Center for the Study of Intelligence. Deputy CIA Director of Plans Richard Bissell “contended in February 1961 that popular discontent with Castro's regime could be galvanized into active resistance only by an external shock.”

“The spring of 1961 was seen as the last opportunity to administer such a shock (without actually committing U.S. troops) before Castro's military received more shipments of Eastern Bloc weapons. A CIA-trained force of Cuban exiles would seize an isolated area along Cuba's southern coast, allowing emigre political leaders to return to the island and offer the populace a democratic alternative to Castro. Assuming the emigre force gained control of the air and consolidated its beachhead, the Brigade's aircraft (obsolescent but potent B-26 bombers allegedly purchased on the black market) would then negate the Cuban Army's numerical superiority and demonstrate Castro's impotence to the Cuban people. Over the next few weeks, Cuba's populace and military would finally mount an active resistance to him, setting in motion his eventual downfall. If worst came to worst, however, the Brigade could be evacuated by sea, and elements might be able to ´go guerrilla´ in the not-too-distant Escambray Mountains. These assumptions proved disastrously mistaken.”

The operation was inspired in a successful CIA intervention in Guatemala in 1954, known by its secret code name PBSUCCESS. In this operation, the agency’s first major undertaking in Latin America, military officers rebelled and overthrew elected president Jacobo Arbenz with the aid of forces that invaded from neighboring Honduras and El Salvador, and with air cover provided by airplanes of the Puerto Rico Air National Guard. The one major difference between both operations was that Cuba would be invaded from the sea. The chosen location, Bay of Pigs, was in the island’s south coast in order to provide the U.S. with deniability. The invasion force was trained in Guatemala and in Vieques Island, Puerto Rico, and its fleet was sent to its mission from Puerto Cabezas, Nicaragua. Under no circumstance was U.S. involvement to become publicly known, for this paramilitary operation was in clear violation of the United Nations and OAS charters, and also of the U.S.’s own laws and constitution.

In the countdown to the invasion, the CIA’s secrecy became something of a joke. According to the John F. Kennedy Library: “Despite efforts of the government to keep the invasion plans covert, it became common knowledge among Cuban exiles in Miami. Through Cuban intelligence, Castro learned of the guerrilla training camps in Guatemala as early as October 1960, and the press reported widely on events as they unfolded.”

The Cuba invasion was preceded by a dawn attack by B-26 bombers on three military airfields April 15. The raid was supposed to eliminate the Cuban air force, but the attacking airplanes, sent from Nicaragua, missed many of their targets and left just enough Cuban warplanes intact to rout the incoming invaders.

Later that morning, Cuban foreign minister Raul Roa denounced at the United Nations in New York that the U.S. was behind the air attacks. The U.S. ambassador to the U.N., Adlai E. Stevenson, emphatically denied that his country had anything to do with the attacks or with any impending invasion. Historical accounts all concur that Stevenson had not been informed of the facts, and that he had indeed been duped into reading a CIA script to the U.N. When his statements were exposed as falsehoods he described the episode as the greatest humiliation of his career and seriously considered resigning his position.

The invasion force landed on the Bay of Pigs before dawn on April 17. But in less than 72 hours it had been trounced by a potent counterattack by Cuban revolutionary forces led by Fidel Castro, who went personally to the battlefield. The defeated invaders have repeatedly claimed over the years that the fault for the failure lies with President Kennedy for not authorizing U.S. air support and military intervention, which they alleged would have turned the battle around.

Recriminations, finger-pointing and investigations into this colossal and embarrassing fiasco began almost immediately. President Kennedy ordered two investigations, one carried out by a committee led by general Maxwell Taylor, and another one by the CIA’s Inspector General, Lyman Kirkpatrick. Both investigations placed blame for the Bay of Pigs failure entirely on the CIA.

The 300-page Kirkpatrick report remained secret until it was declassified in 1998 thanks to a Freedom of Information Act request by the non-governmental National Security Archive. According to The New York Times, all copies had been destroyed save one, which was locked away in the safe of the CIA director’s office.

“Kirkpatrick laid the blame for the failure squarely at the feet of his own agency, and particularly the chief architect of the operation, Deputy Director of Plans, Richard Bissell. The operation was characterized by ‘bad planning,’ ‘poor’ staffing, faulty intelligence and assumptions, and ‘a failure to advise the President that success had become dubious.’ Moreover, ‘plausible denial was a pathetic illusion,’ the report concluded. ‘The Agency failed to recognize that when the project advanced beyond the stage of plausible denial it was going beyond the area of Agency responsibility as well as Agency capability.’ In his cover letter to the new CIA director, John McCone, Kirkpatrick identified what he called ‘a tendency in the Agency to gloss over CIA inadequacies and to attempt to fix all of the blame for the failure of the invasion upon other elements of the Government, rather than to recognize the Agency’s weaknesses.’”

The CIA's officers ''became so wrapped up in the operation as such that they lost sight of ultimate goals.'' Their budget multiplied from US$4.4 million to $46 million. Within a year, they created "an unruly, ill-trained, crudely supported invasion force whose cover was blown, and whose existence had been broadly hinted at in newspaper reports before the operation took place," the report said.

However, the damning Kirkpatrick report did not go unanswered by the Agency. Jack Pfeiffer, a staffer who rose through the ranks to become the CIA’s chief historian, spent the years from 1974 to 1984 writing an “official history” of the Bay of Pigs, a massive 5-volume rebuttal to Kirkpatrick in which he defended the Agency. Only the fifth volume remains classified.

According to the National Security Archive, Volume Three of this history “provides the most detailed available account of the decision making process in the White House, CIA and State Department during the Eisenhower administration that led to the Bay of Pigs invasion.” It contains some startling revelations, including CIA collusion with organized crime to assassinate top Cuban revolution leaders. “In November 1960, Edward Lansdale, a counterinsurgency specialist in the U.S. military, sent the invasion task force a MUST GO LIST of 11 top Cuban officials, including Che Guevara, Raul Castro, Blas Roca and Carlos Raphael Rodriguez.” And no less significant, Volume Three states that the CIA task force in charge of the assault did not believe the invasion could succeed without it becoming an open invasion with the support of the U.S. military.

This volume had been declassified in 1998 but it did not become public until 2005, when professor David Barrett of Villanova College discovered a copy in an obscure file at the National Archives and posted it on the college's web site.

Pfeiffer’s still-classified Volume Five “contains a forceful rebuttal of Kirkpatrick’s focus on the CIA’s own culpability for the events at the Bay of Pigs,” says the National Security Archive. “Like the rest of the Official History, the CIA historian defends the CIA against criticism from its own Inspector General and seeks to spread the “Who Lost Cuba” blame to other agencies and authorities of the U.S. government, most notably the Kennedy White House.”

Pfeiffer had wanted this fifth volume declassified so he could publish it as a book under his name, but this has not happened. In May 2014, in yet another chapter of the Bay of Pigs cover-up, the U.S. Court of Appeals for the Washington D.C. Circuit ruled that the volume must remain secret.

Upon learning of the invasion, the Cuban people indeed rose up, but they did so to defend their revolution and oust the CIA mercenaries.

"The D.C. Circuit's decision throws a burqa over the bureaucracy," decried Tom Blanton, Director of the National Security Archive, the plaintiff in the case. "Presidents only get 12 years after they leave office to withhold their deliberations," he commented, "and the Federal Reserve Board releases its verbatim transcripts after five years. But here the D.C. Circuit has given the CIA's historical office immortality for its drafts, because, as the CIA argues, those drafts might 'confuse the public.' ... Applied to the contents of the National Archives of the United States, this decision would withdraw from the shelves more than half of what's there," Blanton concluded.

“Titled ‘CIA's Internal Investigation of the Bay of Pigs Operation,’ Volume Five apparently contains Pfeiffer's aggressive defense of the CIA against a hard-hitting 1961 internal review, written by the agency's own Inspector General, which held the CIA singularly responsible for the poor assumptions, faulty planning and incompetence that led to the quick defeat of the paramilitary exile brigade by Fidel Castro's military at the Bahia de Cochinos between April 17 and April 20, 1961.”

But behind all the self-serving bureaucratic blame-shifting, reports, rebuttals, cover ups, charges and countercharges, lies one truth that is most painful for imperialism and its allies. Underlying the whole invasion was the assumption that the Cuban people would rise up to overthrow the revolutionary government. Upon learning of the invasion, the Cuban people indeed rose up, but they did so to defend their revolution and oust the CIA mercenaries. And that’s the most important and timeless truth about Playa Giron.