For much of Bolivian history, women have been marginalized and excluded from  society and from formal political power. However, despite centuries of deeply imbedded patriarchal practices, women from rural, mining worker communities and feminist cooperatives have led important political mobilizations, including hunger strikes, street protests and barricade movements in defense of land, labor and gender rights. 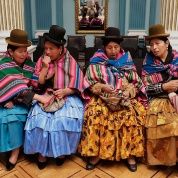 In an interview with teleSUR English, Alejandra Ramirez, author and professor at the University of San Simon in Cochabamba, Bolivia, discussed the important role of Bolivian women in social movements and the impact their role has had on their status within society.

“Historically, women have played a primordial role in the various social movements that make up Bolivia. Last century women began to adopt a more active and visible role in the struggle for general citizenship,” Ramirez stated.

Bolivian women have been active participants in Bolivia’s evolving political framework; however, they have not always enjoyed equal access to formal political spaces.

The status of women in Bolivian society has undergone a significant change recently, as it was until 1952 that they were granted full citizenship and universal suffrage- an action that opened the door to women's political participation.

As a result, Bolivia’s social and political sphere today is much different under the government led by President Evo Morales. However, this transformation is in part due to the changing attitudes toward women within society - a consequence of the important role played by women in both historical and contemporary resistance movements, such as the struggle against neoliberal privatization measures.

The neoliberal chapter of Bolivian history was characterized by the effects of economic austerity measures that led to a deepening of poverty and social exclusion that disproportionately affected women.

The anti-neoliberal uprisings such as the Gas and Water Wars led to an emergence of new ideologies and participants (both women and men), who demanded a radical transformation of the economic, political and social framework of the Bolivian state and society.

“Today women participate heavily in grassroots organizations and in the larger movements that they represent. It is women who mobilize on a daily basis to achieve the objectives put forth by each organization,” Rodriguez told teleSUR English.

One of the notable features of contemporary Bolivian society is the presence of women at all positions of power, in ways unimaginable in the relatively recent past.

The growing political empowerment of women has been further enhanced by Bolivia’s ratification of a number of international agreements pertaining to gender equality.

Since 2005, Bolivian president Evo Morales has approved many important legislative measures that have increased social and political participation among the female population.

An electoral law passed in 2010 and implemented during the 2014 elections stipulates that candidate lists for the upper and lower houses of the Legislative Assembly must include equal numbers of men and women.

As a result, following the 2014 parliamentary elections, Bolivia emerged as one of the two countries in the world with the highest female presence in the legislative branch.  In the Upper Chamber, 16 of the 36 members are women (44 per cent) and in the Lower Chamber 65 of the 130 (50 per cent).

“These results and figures exceeded our expectations and surpassed all Latin American countries with indexes measuring the overall percentage of female legislators,” Novillo added.

“Today women participate heavily in grassroots organizations and in the larger movements that they represent. It is women who mobilize on a daily basis to achieve the objectives put forth by each organization.”

Bolivian president Evo Morales has also incorporated the principle of gender equality into his cabinet-level appointments, which has the highest percentage of women in ministerial positions in the Latin American and Caribbean region.

The Bolivian government took another important step forward with legislation aimed at ensuring that women can fully exercise their political rights when it approved the Law against Political Violence and Harassment against Women.

The law provides a two- to five-year prison sentence for anyone who persecutes, harasses or threatens an elected woman or women exercising public functions. The penalty for  physical, psychological or sexual aggression is three to eight years in prison.

These important legislative victories were passed thanks to  extensive advocacy by women's groups, such as the national women’s network, Coordinadora de la Mujer, which put relentless pressure on Bolivian legislators to approve progressive gender policies.

“We have managed to fight for and achieve a variety of laws that formally guarantee a woman’s right to participate in politics, but also their right to live a life free of violence,”Novillo told teleSUR.

Equally alarming is the persistent wage gap that exists between men and women in Bolivia, where men earn on average over 50 percent more per month than women, which is the highest in all of Latin America.

Needless to say, while Bolivian women still face considerable challenges, overall the policies approved by Morales’ government have demonstrated its commitment to improving women’s lives through programs such as the Bono Madre Niño and Bono Juana Azurduy de Padilla, which provide economically disadvantaged women and their families with medical services and cash benefits on the condition that they follow a schedule of regular health checkups for both mother and child.

Efforts by the Morales administration have not gone unappreciated, as evidenced through the support given by powerful woman’s organizations, including the Bartolina Sisa National Federation of Bolivian Peasant Women, which represents the largest section of the women’s movement, with a membership that reaches over 100,000.

The introduction of gender-based policies combined with the sustained struggle of womens’ organizations in promoting equal opportunities for women in the political and social arena will undoubtedly continue to reshape Bolivian gender dynamics.